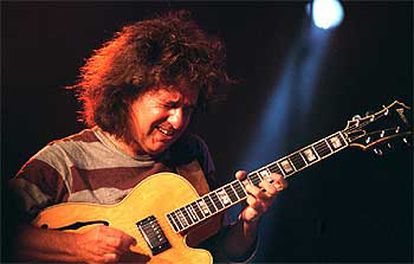 On Tuesday night, the lobby of the Palau de la Música was a boiling swarm. The desire to see Pat Metheny again they were noticeable in the excited atmosphere. It was not for less. First, because Barcelona has always been a shamelessly favorable place for the guitarist from Missouri. And in this case the not trivial detail was added that most of the public that was going to fill the premises had the tickets in their pocket for two and a half years.

The concert had been scheduled for January 20, 2020, the causes known to all delayed it to June 2021, but it could not be held either due to the persistent presence of the same virus. And finally, on Tuesday, Pat Metheny, in a trio format, as initially announced, appeared at the Palau de la Música in Barcelona.

In the lobby, the already typical stall offered the usual t-shirts and the latest albums by the performer, including some autographed deluxe editions (even the great performers have to resort to concert sales to round off the savings). In this case they added to €50, raising funds for Ukraine, guitar stands used by Metheny on his tours, dated and autographed. At least a nice initiative.

After passing that first human barrier, another point of interest these days at the Palau focuses on the small exhibition that, at the entrance to the bar, recalls Pau Barceló (The spectacle revealed). A large group of magnificent snapshots commemorate the work of the well-remembered photographer, always discreet with his Leica, to one side of the stage, trying to go unnoticed and, above all, not to make noise when shooting when the orchestra allowed him or the Applause from the audience drowned out their clicks. From Sergiu Celibidache to Yo Yo Ma, including many of our great performers and, even skipping the norm of classical music a bit, a Raimon remembering Espriu. A small exhibition that is really worthwhile, although on Tuesday night the public of Metheny preferred to immortalize themselves in hundreds of selfies. It was hard to get around without messing up any photos. Given the profusion of devices ready to record, before the concert and in several languages, it was explained that the musicians did not want to be photographed, recorded or filmed and that they please turn off their mobile phones. And the majority paid attention, a detail to be thankful for.

Metheny appeared alone armed with his already popular multi-necked 42-string Pikasso guitar and improvised with his soft, caressing sensibility, playing with the instrument’s spectacular sonority. With the start of So May It Secretly Begin were introduced. discreetly his two companions, keyboards and drums. And there began a wandering through some of his popular songs (reaching up to his first album in 1975) that the public received with delight.

What affects the most is what happens closest. To not miss anything, subscribe.

Metheny was unraveling, one by one, all their faces: from pure acoustic cuddling to almost heavy metal, from folk to harmony. He remembered without words, he only spoke to introduce his musicians, friends like Charlie Haden or Michael Brecker and plunged into a prospective and exciting jazz on scores by Ornette Coleman that left that taste that Metheny could go much further but or not dares or is very clear that his audience would not accompany him, at least for the entire evening, a little while is enough. And speaking of all his faces, he even went so far as to present a piece, not all of it, of his ostentatious orchestra, that instrument created from metallophones and acoustic percussion hit by electrical stimuli launched by his guitar, pure anecdote.

An anthological concert by an overflowing Pat Metheny that more than made up for the two and a half years of waiting.