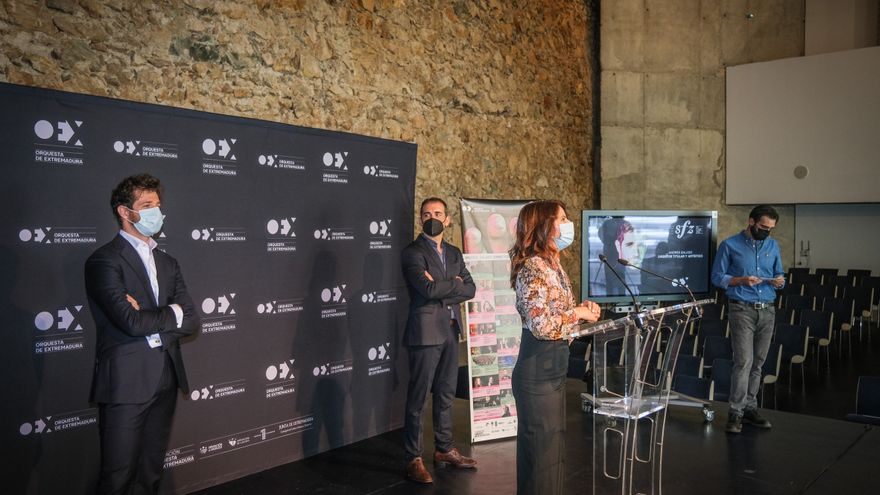 The Minister of Culture, Nuria Flores, together with the new director of the Oex, Andrés Salado, and the manager of the Extremadura Orchestra Foundation, Esteban Morales, yesterday.
S. GARCÍA

Thrill. This is what the Extremadura Orchestra intends with its programming and projects for the 2021-2022 season, which was presented yesterday in Badajoz and which arrives loaded with news. The most important is the incorporation of its new titular and artistic director, Andrés Salado, who takes over from Álvaro Albiach, and who faces this challenge “wanting to give it his all.”

The Oex will offer, between October and June of next year, fifty concerts, four of them absolute premieres and one in Spain, in the auditoriums of the conference centers of Badajoz, Cáceres, Plasencia, Villanueva de la Serena, Almendralejo and Mérida , which joins the circuit of habitual stages of the Extremadura orchestra after several years. Spectators will be able to enjoy 26 shows, with about 50 works, 17 of them performed for the first time by the Oex, in a repertoire that includes great symphonic works, concerts for the whole family (‘Las ojeras de la luna’ and an adaptation of ‘El Principito’ and fusions with musical styles such as Latin jazz, together with a legend like Michel Camilo, and collaborations with bands and artists such as Second (with whom the season will open on October 1), Marwan or Abraham Cupeiro.

Next season 13 conductors will direct the Oex, including Álvaro Albiach, who will return to what “is still his home” as the main guest conductor and who will also lead the Young National Orchestra of Spain, which will perform a small tour of Extremadura with stops in Badajoz, Cáceres and Villanueva de la Serena in November as part of its ‘Autumn Encounter’. “It’s like having the Under-21 soccer team training and playing official matches here,” compared the manager of the Extremadura Orchestra Foundation, who together with the Minister of Culture, Nuria Flores, and Andrés Salado, advanced the content of the new season, entitled ‘Efforts’ to reclaim the profession of musician and make visible that the beauty of the shows that reach the public are the result of their “hard” work.

If the list of invited directors is bulky (Daniel Abad, Jorge Yagüe, Daniel Smith, Beatriz Fernández, Fernández, Joana Sierralta, Joana Carneiro, Marzena Diakun, Rubén Díez, Salvador Vázquez, Pablo González, Guillermo García-Calvo and Charles Oliviere -Munroe ), even more so is that of the soloists who will perform with the Oex, some of them for the first time, such as the cellists Anastasia Kobekina and Guillem Gràcia; the violinists Ellinor D’Melon and María Dueñas; the flutist Clara Andrada, the mezzo-soprano Clara Mouriz; the marimbista Conrado Moya; the pianists Josu de Solaun and Anna Tsybuleva; or the clarinetist Víctor Díaz Guerra. In addition, the soprano Ruth Iniesta, the pianists Daahoud Salim and Lucjan Luc and the oboist Ramón Ortega Quero will repeat accompanying the Extremadura orchestra.

Also for the new season they intend to expand the digital content of the Oex, which will record three of its concerts so that they are available to the public who cannot attend the auditoriums.

Flores, who recognized that the Oex is the “jewel in the crown”, predicted that Andrés Salado will leave “a great mark” in the four years that he will be at the helm of the formation. For now, he will also maintain his position as director of the Extremadura Youth Orchestra, “which is a fundamental pillar and one of the best in the country,” he said.