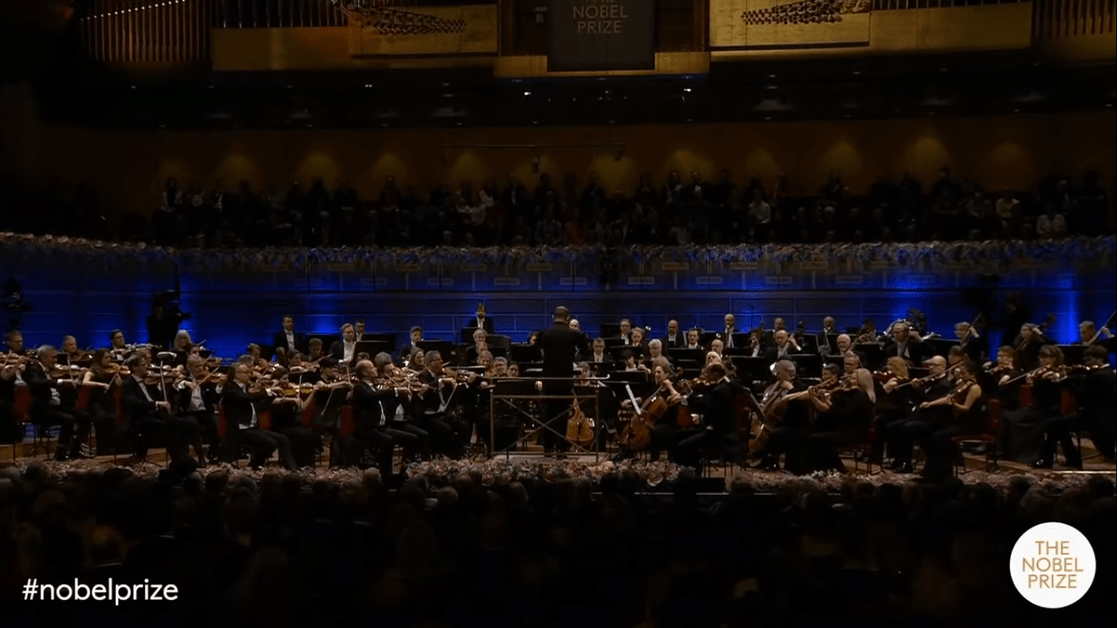 In honor of outstanding achievements and infinite curiosity, the “vibrant” music of the Nobel Prize Concert was dedicated, again with an audience at Konserthouset Stockholm and broadcast live to the world thanks to the Internet.

“Two Charismatic Artists”, cellist Sol Gabetta and conductor Ryan Bancroft were the star figures alongside the Royal Philharmonic Orchestra. “It is a pleasure to be in this beautiful room, with all of you from around the world. Dear laureates, this concert is for you ”, were the welcoming words of Laura Sprecmann, director of the award.

Excelsior, overture by Swedish composer Wilhelm Stenhammar, who was a force behind the construction of the host orchestra’s headquarters building. The rest of the program consisted of Camille Saint-Saëns’ Cello Concerto number 1, “probably the most beautiful music written for the instrument”; The Spark Huntersby Hannah Kendall, a songwriter showing her English and Afro-Caribbean heritage, ending with Spanish whim, by Nikolai Rimsky-Korzakov.

The Nobel Prize Concert is part of the official week in honor of the laureates, held annually inviting outstanding soloists and conductors. This year, the festivities in the cities of Stockholm and Oslo will be a combination of face-to-face and digital, plus many of them will be broadcast online, as will the awards ceremony next Friday, from the Swedish capital city hall.

Sol Gabetta, a 41-year-old French-Argentine cellist, dazzled the stage with a flowing and wide dress in waves of mustard and ocher, as in honor of her name as the star king. When she performed the first cello concerto written by the French Saint-Saëns, she smiled with pleasure, with her eyes closed most of the time.

The American conductor Ryan Bancrotf took the podium without the classical baton in hand, clad in simple black attire and with a mandarin collar, in contrast to the orchestra musicians, elegantly dressed in black tailcoats and white bows. He was recently appointed principal conductor of the Royal Philharmonic Orchestra of this Nordic country for the 2023/24 season. The night on the occasion of the Nobel was his first public presentation with the group.

The 32-year-old musician grew up in Los Angeles, standing out in 2018 when he won first prize and audience award at the Malko Competition for Young Directors in Copenhagen. At her Stockholm debut she would spread her arms like a passionate ballet of swans or an odishi dance, the sweetness on her face to soften the intensity. In the end, he received a prolonged six-minute ovation. Although he returned to the stage, he did not concede a again before the rhythmic demand of the palms.

The sound of drums began the evening, with the Swedish royal anthem in a moment of great solemnity before the entrance of the monarch Carlos XVI Gustavo, who occupied the central box of the Konserthouset Stockholm, the concert hall in the Swedish capital that once again received the public, since last year the orchestra was recorded with an empty forum. This time the images showed the space filled, without distancing and only some of them wearing masks. The building with a blue facade, with neoclassical architecture, has a capacity of 1770 seats.

The concert was recorded on YouTube, for those who want to attend from their screen to the celebration of the achievements of science, literature and peace. “Someday I’ll be asleep when I get the call,” wrote one of the virtual assistants in the chat. While others waved from their countries: India, Colombia, England, Turkey, Pakistan, Iran, taking the roll. Someone else simply said: “a little good music to calm the soul.”