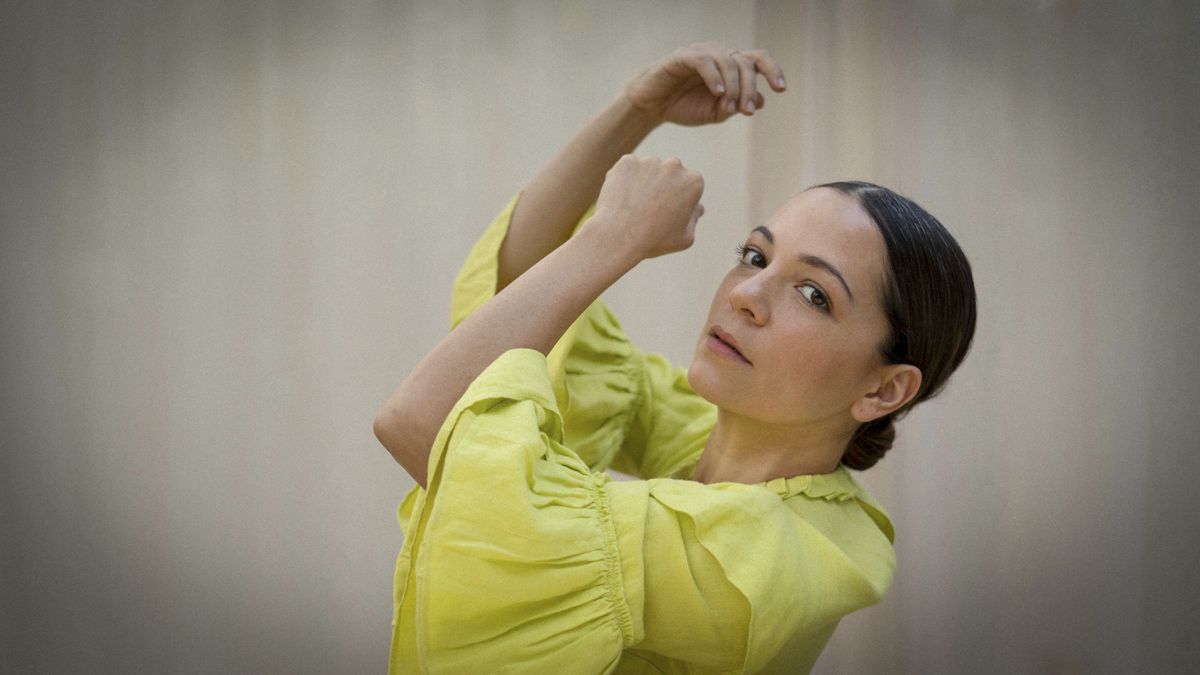 Natalia Lafourcade (Mexico City, 37 years old) tests the sound of his computer. She says she is learning from this new technological world: “I am a grandmother. I am very young for the age that I really am, ”he says, laughing from his home in Veracruz. Descendant of Cuauhtémoc and Mexican fortunately, as the lyrics of The son of the people (Jose Alfredo Jimenez), Lafourcade feels very lucky to be Mexican. “With everything, because everything has its contrasts in life,” he clarifies. He likes his people, his town, where he lives, where he grew up, which is Veracruz. “I am a true fan of my people and their food, of the nature that I have around my house. I live among bamboos, bananas, coffee plantations, trees … It is a beauty ”. This love of nature in her is not new. When she was a child, the house where she lived with her mother was in the middle of the field and in front they had a guava tree. With him, his mother brought the family forward.

How do you remember it? Like a total warrior, a very talented woman. She studied a career as a pianist and later became a music educator. He taught me that things are won, that you have to work to make them happen, that discipline is very important. He never gave me anything without my having to work in return, and I really appreciate that; From a very young age my character was forging, sometimes I am very stubborn. My mother taught me to be sensitive, loving, grateful and to love nature. When there were storms, he would take me out to a little terrace that we had in the house and there he would hug me and say: “Don’t be afraid, look at what beauty.” Where we lived, if you looked straight ahead, there was a field full of cows, and with the rays in the sky you could see them at midnight eating their pasture. Then he confessed to me that he was actually dying of fear.

And his father? My father is a beautiful character with a very strong personality and temperament. He is also a music lover, passionate about poetry and ships, which is another of the hobbies that keep it alive. He has many and he has all made them. They are wooden boats of all sizes, with detail and precision. But of course, it is that he builds harpsichords from scratch. At home I have the first harpsichord he made, which he gave me when I was 20 or 21 years old. For me it has been very surprising to see how he continues to teach and to see that he has the soul of a child at 86 years old. Another of his passions is flying kites (kites). He puts one in the car, he drives off, he flies it up and he’s happy. Over time I have learned to understand her way of being and to love her passion for her world and her life and for the things she loves.

At this point in the conversation, the interview stops at the musical roots of Natalia Lafourcade, who already knew from a young age what it was to act in canteens with mariachis behind the back. Many years later, after that tribute to Agustin Lara titled Divine Woman (Sony, 2012), the Mexican artist continued to develop works closer to folklore: Up to the root (Sony, 2015) and Muses. A tribute to Latin American folklore in the hands of Los Macorinos (Sony, 2017). Last year, with the publication of the first volume of A song for Mexico (Sony, 2020), Lafourcade already warned that this was going to be the last installment of this series of folk albums.

The second part, published in 2021, closes the circle, with the reconstruction of the Documentation Center of the They are Jorocho, in Jáltipan de Morelos, Veracruz, which suffered damage from the earthquake of September 19, 2017. Natalia was in Madrid presenting Muses when that happened. “The pandemic construction stopped for a little while, but last month we made three visits every week, ”she explains happily. If all goes well, he thinks they can deliver the space to them in December. “If that happens, we are going to do a huge fandango to celebrate it.”

“I think that where we come from, the family, where we grew up or the people around us, are part of many more things that we are, that intertwined determine our way of going through life,” continues Lafourcade. “We are many other things that do not necessarily have to come from our family. It is important what our family leaves us and how we were raised, right? Because I feel that there is a period of childhood that remains impregnated in our way of being, that later it is very difficult, when we grow up, to shake it off. I have memory of my mother saying “don’t be afraid”, and now I am not afraid of the dark.

Do you have to be a daughter of the people to sing to Mexico? No. You have to sing with your truth, with love, connecting with the feeling and the heart. And you don’t have to be born in Mexico to sing to him. Sight Chavela Vargas. She was not born on this earth and yet this earth received her. There are artists like her who, upon arriving here, made us value what we have. I could sing in French. I love France, I love it Edith Piaf, I get excited every time I go to Paris … And maybe, just because of that, I could one day sing in French, because I would do it with truth and love.

On the record he sings The braid with Mon Laferte, Chilean, who composed about her grandmother. When we think of My LaferteWe didn’t want her to sing any traditional Mexican song or any Natalia Lafourcade song; she has to sing a Mon Laferte song. We chose The braid for being a song of love, but not of typical love, but the love of the grandmother with the granddaughter. I get excited when I hear it; I identify myself so much that it makes me think of that moment in my childhood where my mother went to work and I stayed at my great-aunt’s house. We have all had that moment. And Mon is an artist who came from Chile to Mexico and now for us she is Mexican.

On November 14, 2019, the MGM Grand Garden Arena in Las Vegas hosted the 20th Gala of the Grammy latinos. Mon Laferte was nominated for Best Alternative Music Album with Rule (Universal, 2018) and their passage through the carpet was the way to show a protest message written on their breasts, which showed naked to the cameras: “In Chile they torture, rape and kill.” Natalia Lafourcade extrapolates it to the rest of the world: “It is very courageous to think that in our world there are still people suffering and so many things that are not fixed and that are not taken care of.” And he applauds the gesture of his partner: “How brave she [Mon Laferte] for having taken that position in the middle of a celebration of music. It also makes you question to what extent we follow normal life a bit, as if nothing is happening at the same time that terrible things are happening in other places ”.

Rubén Blades figure in You do know how to love me, a song that Natalia wrote at the time of Muses and that speaks of love in freedom if it is well reciprocated. Is also Mother Warning Lyrics, from the world of hip-hop or, as Lafourcade puts it, from the “word of protest.” The work that Mare is doing, continues the Mexican, is very important, because at the same time that she is talking about her personal issues, she also talks about the issues of so many women and people around that had not been brought to light before. “Share what she is learning, what she knows is shared with other people. He has a beautiful spirit. She is a woman who possesses a strength, a tenderness with such security … Those are the things that we can do ”.

How does a 10-year-old girl see the world when she is performing in canteens? [Antes de responder, Natalia busca una fotografía que tiene a mano. Es ella con un poncho cantando canciones de Juan Gabriel y José Alfredo Jiménez acompañada de un mariachi]. I didn’t know that I was going to have a mariachi behind me!

Is that the first time you stepped on a stage? Yes. I was just dying of nerves. My knees were shaking, I salivated … I wanted to die. But there was no more: the people were in front and I had the microphone in my hand with the mariachi behind. I started singing and halfway through the song I said to myself: “WHAT-IS-IS-TO? Leave me here all night, because I don’t get off ”. And that day I knew that this was my place. I started asking my mom to take me to the bars where there was mariachi every Saturday. But I was 10 years old. At one point, my mother started to get scared, because she would go, sing and, apart from that, we were doing well. People were happy. Luckily for her and me too, one day, a lady who sang with the mariachi from one of the canteens, in the bathroom grabbed us and said: “Look, miss, although everyone loves your voice and I love how you interpret the song, I am going to tell you something that you may not like: if you keep singing the way you are, in a year you will not have a voice, you will finish it, because although you sing very beautifully, no you know to sing. You cannot sing more than two or three songs, because you become hoarse, because you are singing with your throat and you have to learn to sing. You have to learn technique, voice warm-up, to sing with your diaphragm … ”. He threw me a “choro” of less than a minute. I hate him, but he’s right. There I started taking singing classes and my mother took a little rest.

Who told you that alone you would not be able to act, to record …? A partner that I had. We were very young. I think that some of us have to go through these dark relationships, which are real, harmful heavy. You have such a hard time that you say that you will never in your life put yourself in a situation like that again and you will never allow your relationships to reach this degree of self-destruction. And that’s what I learned. And I never had a relationship this destructive again. I do not regret anything, on the contrary; I think that person was a teacher for me and I surely for him too. I wasn’t a little white dove, huh? It was tremendous too. So it was mutual. This person told me that I couldn’t go into recording an album alone, but that strengthened me.