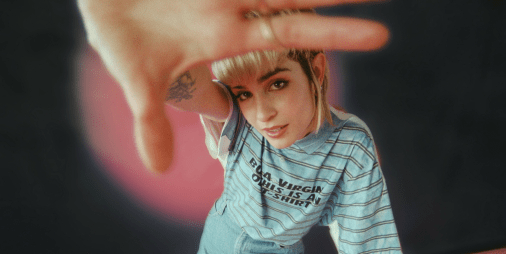 MURCIA. The 22-year-old singer-songwriter Natalia Lacunza will land on September 4 at the B-Side Festival from Molina de Segura, accompanied by her band. Natalia -who participated in 2018 in Triumph operation, and has since released two EPs: Other Alas (2019) and EP2 (2020) -Talk to Murcia Plaza about his new album, which is scheduled for 2022. He enthusiastically celebrates the reception of this concert in the Region, as he assures that in just five minutes the 700 tickets were sold out: “I don’t know if this would have happened anywhere else, so Murcia you just win my heart. ”

First of all, how are you after this concert season?

Well, really good. We are already finishing the tour, and in fact, since we started, we have not stopped playing practically the whole year. I feel super lucky for it, because in this difficult situation almost no one has been able to play; now yes, but before I’ve been one of the only ones that hasn’t really stopped playing at all. In fact, the first tour I did was pandemic. I don’t know what it is to play under normal circumstances, standing up, without a mask … and despite that I have been playing for almost two years and the truth is that I am super happy. The end of this stage is coming, because I’m already very focused on creating the next album; There are two concerts left and we stop until next year.

Now music is consumed in a different way, you no longer just swallow what’s on the radio or at the big festivals, and that gives more opportunities

When is the next album going to come out? How is it going to sound?

I still don’t know exactly what dates; but, in theory, for the first quarter of next year (February / March). It is an album that is not far from the previous two, but I think it has another point, because I am doing it entirely with the same producer. I could say that it is very dream pop –that in Spain you don’t play much – a mix of many genres: electronic, pop (obviously), funky…

And Natalia, is what you wanted to do when you left Operación de Triunfo similar to what you are doing now?

Yes, totally. At all times I have done what I wanted and I have always been very clear about it. Obviously your music evolves as you grow up, the two things go a bit hand in hand. I have been super faithful with what I wanted to do, I have reflected what I felt and what inspired me at every moment, and I am super happy because I have never stopped working or been influenced, and I have improved a lot composing. I also see my project becoming more solid and that makes me very happy.

Your band is made up of only women (Luz Abril, María Lázaro, Teresa Gutiérrez and Paula Ruiz?), How did it come about? Do you think you are opening a kind of path in the industry, breaking with that stereotype of ‘male bands’?

All I know is that I wanted to live a little in Camp Rock (Serie). I wanted to surround myself with people who lived music in a way similar to mine, more or less my age, evolve all together, be from the same generation … I thought it was a bit strange to see a ‘pop girl’ ‘surrounded by women her age. It is something that we are not very used to seeing, sad but it is like that, and I did it because I wanted to surround myself with women. I’m surrounded by men all the time, because the industry is 80% made up of men, and I wanted my band to be what it is.

I would say no to breaking schemes, there are a lot of women and groups making music, I don’t think I’m a predecessor by any means, but I just hope that it reaches the point where it is no longer surprising to see a whole band of women.

In relation to this, how do you see the industry and the music scene today?

We are in a very interesting moment because there are many artists who do not belong specifically to record companies, who are making their niche thanks to the internet, thanks to YouTube, Instagram, Spotify … now music is consumed in another way, you no longer just swallow what that is on the radio or on the big festival posters, now I feel that people have a more concrete way of consuming, and that allows there to be a little more opportunities for artists who do not have as much visibility or support.

I’m going to stop a bit with the collaborations, because I want to focus on my own solo music

In fact, you have focused a lot on collaborating with groups of this style, such as Chill Boys O Trashi for example, that they are creating a fairly new music landscape.

Yes, my collaborations have always been super organic. I like to do them with people around my age, who live music in the same way as me and that it comes out in the purest possible way. The result is always groups of this style. Now I’m going to stop a bit with the collaborations because I want to focus on my own solo music, although in not long a collaboration will come out, but it’s not my song, it’s from another boy, so I can’t say anything yet. .

What have you learned since you left Operación Triunfo? Has your audience changed?

I have learned that constant work is very important, but also listening to yourself, following your own instincts and working very hard from there. It was already clear to me, but it is something that I have verified. And with respect to the public, hI have noticed that it has expanded a lot, there are many people who stayed since Operación Triunfo but also many new people, people of all types and of all ages, and that makes me very happy.

Do you consider your aesthetics and that of your band very important?

I believe that the image is something very important, not the image for beauty canons, but more for the energy that you transmit on a visual level. Nowadays it is no longer valid to make good songs, you have to give everything a direction, to accompany them and to add. The visual energy that you give as an artist is essential, it is reflected through the clothes, the image, the video clips, the hair … and I consider it fundamental.

How do you live social networks?

I take them as a work tool, because it is basically a platform to connect with your audience and show new things. There are times that I would like to use them less, but I just know that they are something beneficial for my career and that is how I take them, they are basic, although I consider myself very ‘unprofessional’ in them (laughs).

Of course! Murcia is like my third home, my first home is Pamplona, ​​then Madrid and then Murcia; I come here a lot and I have a lot of friends here. I’m very excited to play. Also, the tickets for the September 4 concert have sold out in literally five minutes, 700 people in no time, I don’t know if this would have happened anywhere else, so Murcia just wins my heart.