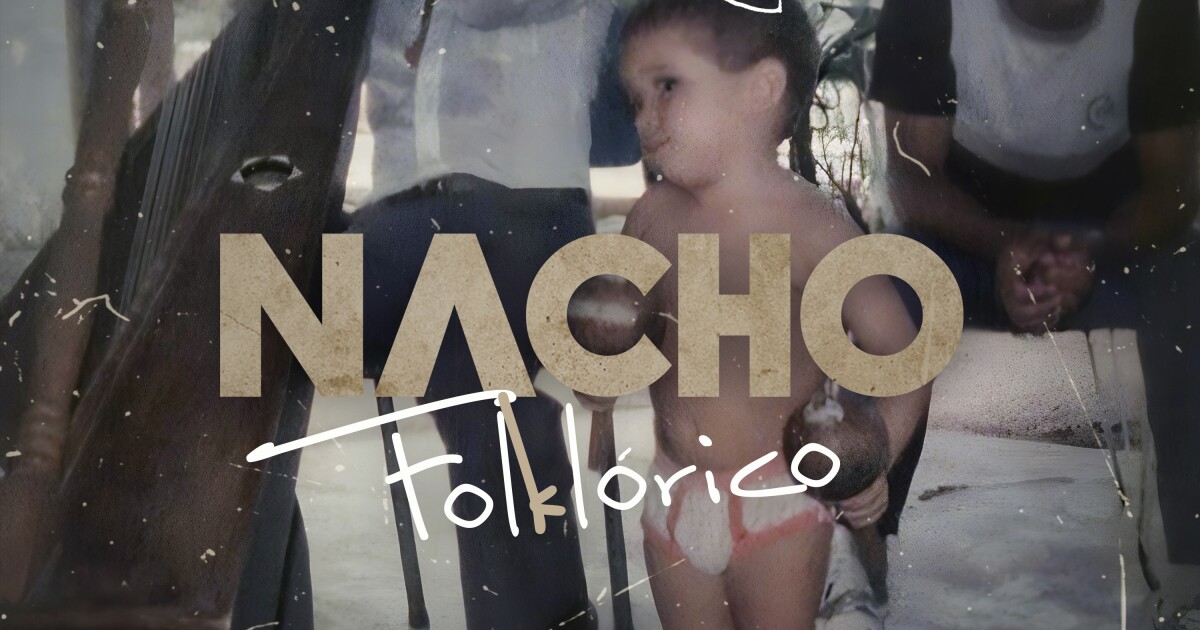 Nacho celebrates his llaneras roots with a conceptual album in which he recalls his childhood, his beginnings in music and his love for his country, Venezuela.

Featuring 10 songs played on typical Venezuelan instruments, harp, cuatro, and maracas, accompanied by an electric bass, the urban-tropical singer released “Nacho Folkórica” (Universal Music) on Friday along with the music video for the album’s opening track, “My expression.”

“Here I am fulfilling a dream that I had since I was little and it has come true / Singing llanera music is happiness for me / Because I carry it in my soul, that is a great truth”, Nacho sings at the beginning of the song, expressing from the outset what this project means to him.

“Obviously I feel very proud representing young people with modern music,” Nacho told The Associated Press in a recent interview from Miami, where he lives. “But after having achieved popularity with my style of urban music, I think it is a great responsibility that I have to assume not to continue alienating young people from what naturally defines us, but to try to contribute, rescue my roots and show them where I come from. we come, what is our real music”.

The former member of the duo Chino & Nacho, known for pop songs like “Mi Niña Bonita” and “Andas En Mi Cabeza”, has enjoyed a solid career since making his solo debut in 2017 with hits including “No te vas”, “Báilame” and “La Buena” and videos that add up to hundreds of millions of views on YouTube.

The musician, whose real name is Miguel Ignacio Mendoza Donatti, was born in Lechería, in the northeastern state of Anzoátegui, and grew up in a family that did not miss the opportunity to play Venezuelan folk music whenever they got together.

“It was just a family hobby. In each of the meetings, everyone spent the four like a hot potato and each one began to sing their songs or songs recognized within the genre of folklore, and that’s how I started, ”she recalled. “I learned to sing through my mother’s family.”

Already in primary school he began to participate in folk music festivals and took home more than one award singing joropo.

“But obviously one is hit by the onslaught of modernism and there comes a time, let’s say at 17 years old, when I begin to experiment and begin to listen to rock, to listen to merengue, to listen to salsa, to listen to pop, and to catch all those rhythms that They helped me to be much more versatile in music, but they completely separated me from my Venezuelan roots,” he said.

Presenting an indigenous project was of the utmost importance for the 38-year-old artist, who refrained from experimenting and recruited Venezuelan Creole music writers Rolando Díaz, Enrique Belizario, Wilfredo Vegas, Elio Díaz and Bartolo Jiménez to capture “the words of our Venezuelan plain, that lexicon that defines our folklore”.

The result can be heard in songs like “Tonada”, “Con vista al mar”, “La defeat”, “Mujer” and “Dos Naciones, un folklor”, which she performs together with Carlos E. Ochoa on the harp, Yosmar Cabrera on the fourth, Erick Chourio on maracas and Milvier Ortiz on bass.

Each song has its respective video, which combines scenes of the musicians playing at Nacho’s house in the city of Maracay, some 120 kilometers (75 miles) west of Caracas, with others riding horses through plains landscapes or sitting on the beach. The direction was carried out by Wilmer Romero.

Excited about this project, Nacho confesses that he has “very high expectations” and the hope that his colleagues will recognize the work and effort that was made in terms of production.

“I swear to you that we were super meticulous at the mixing level, at the mastering level, at the recording level, at the quantization level… Everything was very well taken care of, so I would like my colleagues to at least hear it. I feel like it’s a beautiful piece of work,” he said.

He announced that his next album, titled “Como antes” and which he hopes to release in August, will return him to the sound he created with Chino Miranda (now artistically known as Chyno) in his early days.

“During my time as a soloist I have experimented with many rhythms so as not to disrespect the sound that was achieved as a duo, but I feel that that is where my essence basically lies,” said Nacho. “(Now) I find myself again, with that tropical base of merengue and songs that have their humorous touch and their history, songs that have some substance at the composition level”.

On the health of Chyno — who continues to recover and remains out of the public eye after suffering a serious case of COVID-19 in late 2020 that led to paralysis and other complications — he said that, like most people, he is a little oblivious to all that process.

However, he did shed some hope from a recent conversation he had with Chyno’s cousin, who he said is the one “let’s say leading his recovery.”

“Despite the fact that she does not go into the details much, because right now it is the first time that I speak with her and she tells me very positive things, that they have done tests that have come out super positive, and that they continue to work on his recovery. Nachos said. “It’s time to wait for them to feel that he is ready to communicate again, to be back, let’s say, in the public arena, and I also have to wait.”

“I would love to see him well, I would love to share music with him again,” added the musician, recalling that, just before Chyno got sick, they recorded an album that was supposed to be their great reunion. “With God’s favor… We want him to get better.”

Nacho celebrates his llaneras roots in the album ‘Folklorico’