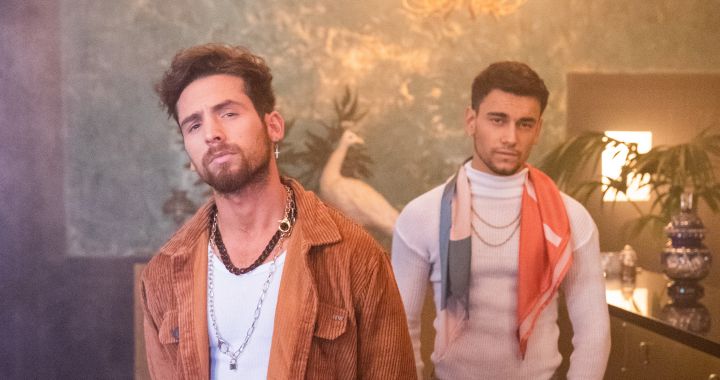 Maxi Espíndola and Agus Bernasconi They have been known since adolescence. Both coincided in the Argentine youth telenovela Aliados, created by Cris Morena (producer behind such famous series as Rebelde Way and Almost Angeles). There a beautiful friendship was created that almost a decade later continues in force.

This relationship of friends was consolidated thanks to his passion for music. Both artists began uploading cover videos on YouTube, making their fans fall in love. Thus, in 2018 they had the opportunity to have their own group: MYA.

Three years later, Maxi and Agus are living their own dream: to live off music. His latest success? Nothing more and nothing less than the remix of 2:50 next to Teen and Duki. In fact, it was this song that has brought them back to Spain. The duo was on top of the stage with the Argentine artist at the Coca-Cola Music Experience singing it.

This same Friday, September 10, they have also released a new song: Like + nobody. To talk about their musical plans, their experience in Spain and their past as teenage stars, MYA gave us an interview with LOS40.

Question (Q): The first question is obligatory, how about the return to Spain?

Q: We have seen you in a Madrid studio composing. Are you taking advantage?

Maxi: We have been with the Raccoon boys. They are our producers from Colombia. One of them is Isaza de Morat. These days we are going to continue working on the next thing. Whenever we have the opportunity, we take the opportunity to make music.

Q: Have you met any Spanish artist in the studio?

And: The truth is that we have not had the opportunity to stay in a studio. But at Coca-Cola we have come across several. With Ana Mena, for example, we have a very good vibe. Hopefully one day there will be a chance to sing in the studio with her.

Q: I have also seen in networks that during these days in Madrid you have been eating with Teen and Nicki nicoleHave you made Argentine pineapple here?

And: We agreed that the two of them were together with their team, that we know them, and it turned out to be a lot of good vibes. We have met them a couple of times. Also with the guys from DVICIO. And it was very nice to meet again.

Q: You were singing in a restaurant with Nicki and Tini, did the staff say anything to you?

Maxi: (Laughs) We were singing at the last minute. The site was closing and they asked us to please leave because they wanted to go to sleep now. We kept singing.

Q: You have already collaborated with Tini, but not with Nicki yet. Are things coming?

And: The truth is that we haven’t talked to her about it. But there is very good vibes. She is an artist that we greatly admire and with whom we get along very well. Is very large. Hopefully there will be an opportunity to record something with her.

Q: With Tini you have released the remix of 2:50 a few months ago. Duki also joined. I want to know why give a second life to this song.

Maxi: 2:50 was a very special song for us from the beginning. We didn’t plan on doing the remix at first. It happened that way. We were playing one day, we got together and 2:50 came out in an acoustic version. That night Duki was there and in the middle of the song he got on to do a freestyle. When he put the remix on the table it seemed like an incredible idea. In a few days we were in the studio and he recorded his part. Broke it. Tini also signed up. We came from doing something together and we felt that it could be something interesting.

Q: Do you think then that the songs have to last longer than 2:50 as you say in the song?

And: Well I think so. What this song says is that the song lasts longer to spend more time with that person. I think it has happened to all of us at some point. Being in a bar or at a party and meeting someone special. Dance with that person and want the moment to be eternal. That’s what he’s talking about.

Q: But if we talk about the trend in the industry, are we going to make the songs last less and less?

Maxi: Yes, it also depends on the song. Now longer remixes are coming out. Over there songs of more time do emerge.

Q: It’s been two years since you released your first album. Are you already focused on the second or are you only taking out single songs?

And: We are full with new songs. Looking for what themes can fit on the album. We are very anxious because people can already hear some of the songs that will go. We are also looking at the design of everything. It is a very interesting part. Soon we will reveal things.

Q: The songs that you have been putting out during these two years, will they be on the new album then?

And: Obviously there are going to be the songs that we have been releasing throughout this time. We are also going to put unreleased songs so that people have some surprises.

Q: I want to talk to you about the current Argentine music scene. He’s hitting it. What kind of relationship do you have with each other?

Maxi: I think the Argentine music scene has grown a lot in the last three years. There is an energy of companionship that is critical for it to grow in this way. I feel like there has been a lot of growth in both the artists and the producers. This is terrific.

Q: Does the collaboration between all of you emerge organically?

And: Exactly. Our collaborations, at least, have always been like this. You have to be very cool for them to flow

Q: Agus, in Spain many people know you for your character in Yo Soy Luna, the Disney soap opera. Is it difficult to get rid of that Disney past?

Agus: I think it is logically normal. It was very strong in Spain and Latin America. I think we were able to get deeply involved with MYA and bring part of that audience that followed me through that series. I believe that everything can be carried. There are many fans who knew us through a series and ended up falling in love with our music.

Q: You also coincided in Aliados, a youth series by Cris Morena (Rebelde Way, Casi Ángeles). Has it been difficult for the public to see you as adults?

Maxi: I think the audience grows with one too. I feel that from the first moment we were connected with the music. Since we started recording the series, we were already preparing songs and uploading music to our YouTube channels. We were always musicians and we were waiting for our moment to be able to release our own songs. We were making our own way in music. Thank God more and more is happening.

Q: And do you miss acting?

Maxi: I think we really liked it and we like it, but right now we are one hundred percent with the music. We do not close the doors to act. When we were called to do the Aliados series, we were very surprised because it was something that we had never done before.

And: In addition, in the video clips we try to act a little and refresh.

Q: Now that you’ve been to Spain, which artist from here would you like to collaborate with?

And: There are so many huge artists here. With Alejandro Sanz it would be crazy. We admire him so much and doing a ballad with him would be amazing. As we said before, with Ana Mena we would also love it. We also love Aitana.

Q: For Alejandro Sanz, you can ask Tini for the number, who will have it after Un beso en Madrid.

And: We met him the other day.

Maxi: I was on Camilo’s show and it’s the best.

Q: Finally, two years have passed since we interviewed you for LOS40.com, and I want to know how MYA has changed in this time.

Maxi: It has been two years that had an impact on us. I think we have also had time to think of more songs. We came from traveling all the time and MYA’s sound and style could grow. This for us was fundamental.