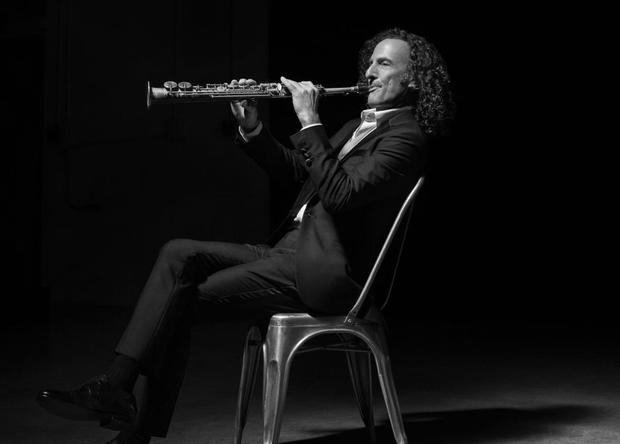 We have been able to listen to his music in films such as “Pretty Woman”, “The Bodyguard” or “Wall Street”, he surpasses -by far- in record sales the great names in the history of jazz and his own is written about a star on the Hollywood Walk of Fame. He turned songs like “Silhouette”, “Forever in Love”, “Songbird”, “The Moment” or “Sentimental” into hits. All this, even if the purists of the genre like it little or not at all and others consider it a misunderstood talent. Precisely about how inexplicable his success is for many, he deals with “Listening to Kenny G”, the documentary directed by Penny Lane and recently released on HBO Max that, through interviews and testimonials, shows us an artist as kind as he is intelligent, as well as tolerant of his harshest critics. About that audiovisual document, his first days with Barry White, his relationship with the saxophone he has played since he was a teenager, his experience with R&B in a Seattle agitated by grunge and his passion to become a better musician, he spoke with El Comercio in the next interview.

─Thirteen years have passed since your last visit to Peru. How does it feel to come back after so long?

I love to come back. I remember that the last time I was in Peru, 13 years ago, as you say, what I enjoyed the most was the Peruvian-Japanese food, it was really delicious. I am excited to return because, in addition, I will have a few days to take advantage of Lima and I really hope that people enjoy coming to my show, just as I will enjoy getting to know your city.

─What is the biggest test you had to go through to become a successful saxophonist?

First of all, I want to say that I have played the same saxophone since I was in high school. It’s a beautiful instrument that has practically become a part of my body, it’s a part of me, so it’s impossible for me to imagine playing another saxophone. I don’t think I’ve had to go through any challenges to achieve success, I’ve just continued to be disciplined in my practices and worked very hard on trying to become the best saxophonist I can. That, for me, is the most important thing: to consistently keep practicing your subject and try to be better with each passing day. I think that’s what I do and then the rest of the stuff falls into place.

─You were born in Seattle, a place linked much more to grunge than to your musical style. What was it like being young in a context like that, with bands like Nirvana, Soundgarden or Pearl Jam?

Honestly, I’ve never listened to grunge music, so it never had an effect on me. I grew up in a neighborhood where there was a lot of R&B, so that’s where I started, and as I got older and went from high school to college I started listening to more jazz, so I think I ended up combining the two styles. I’m proud because my sound is unique and I’m glad that people seem to enjoy what I do.

─What is your best memory of your time with Barry White?

I played with Barry White when I was still in high school. It was a wonderful experience playing a professional set being so young. This created in me a confidence that I could play with professional musicians and that he was good enough and therefore could continue doing this.

─What do you feel has changed the most since the 90s, with all the success and fame that those years meant to you, compared to today?

Things are quite different from how they were in the 90s. Especially with social platforms and streaming music, it makes for completely different situations. It is very difficult to reach people. Before, when I had a concert, I knew that they put my songs on the radio and, since everyone listened to a single radio, everyone heard about the concert. Now, with so many things to pay attention to, it’s hard to reach people. It’s even hard for them to find out that we’re coming to their cities to play, so it’s much more challenging this way. Also, people don’t listen to music in the same way, putting on a record. Now it’s streaming from your mobile devices and it’s not the same. There is good and bad.

─You have done duets with Elton John, Sinatra, Stevie Wonder, Barbra Streisand or Katy Perry. Which one have you enjoyed the most?

Regarding the duets, I enjoy each one for the music and I don’t compare them. If I accept the contract to play a duet, it’s for the music. If I like the music I will create a solo that works and I take pride in those things. For me, it’s like putting together a puzzle and finding the missing piece, and when I do that I feel very satisfied.

─What thing in the world gives you the most inspiration to create your music and develop your interpretations?

About the inspiration of my music, I can’t tell you something specific, but I think what happens is that I have a certain feeling when I play my saxophone and when I play certain notes and melodies something happens and I understand if this can be a song and I go from there . It usually happens with the saxophone in my hands, sometimes while driving, or sitting, and suddenly a melody comes to me, but most of the time it’s when I pick up my saxophone and start playing notes that inspire me to write a melody of they. This is how I get my inspiration.

─Is the sensation of playing the sax comparable to that of flying planes, your other passion? Could you choose one between the two if you had to?

From the very idea of ​​trying to master a skill, like golf, something that I enjoy. Of course also playing the sax for me is the same, because it’s something I enjoy, I try to become someone really good at it, because I enjoy it more when I’m good at something, and I’ll enjoy it more if I’m great at it, and I’ll enjoy it even more when it’s even better. So I try to get to that level with the things that I like and that’s the similarity there.

─What feeling did the recent HBO documentary about your life leave you with? How does it feel to contemplate what you have achieved with your career as in a movie? Because there are also moments that are very critical of your music…

I think it was a wonderful documentary about how people like different styles of music and how passionate they are about it. There are some critics who don’t like my music, they’re very passionate about it, and I think it’s great that their voices were included in my documentary so that it wasn’t a movie about me or my life or how great it is. This or that. It’s really an opening to the discussion about how passionate people are about their music and why they think it’s great or not, and how an artist like me can deal with critics. So the main thing, if people had to take something from the documentary, would be that they believe in themselves and work really hard at what they do and not worry about what people say. If they are passionate about what they do, obviously, that will lead them to be happier people. Find what you really like to do and work hard at it to get really good at it. So I think people will generally be happier.

─Finally, what can we expect from the show you will give in Lima as part of the New Standards tour?

We’re going to play songs from our older albums and probably a song from our New Standards album. I’m sure that most of the people who will be coming to our concert will not have heard our new album, because that’s how it is nowadays, so we will probably give them a song to enjoy in advance. My concerts are full of energy, more energy than most people would imagine. We have a band and everyone gets to do their solos, so if you want to see an awesome percussion solo, you’ll see it, as well as piano, guitar, bass and of course saxophone. I think we make our music very accessible to people, so even though we’re playing complicated songs with a lot of notes and probably complicated jazz songs, we do it in a way that people can really absorb and enjoy. I hope that people leave my concert thinking or, rather, knowing that they have seen six great musicians on stage doing what they do, and what they have worked their whole lives to do, because we have all dedicated our lives to our instruments. We’re proud of how good we are and we hope that people walk away thinking that they’ve seen six musicians at the highest level and that will probably inspire them. Probably many young people come to the concert and get inspired and pick up an instrument because they were really moved by what they saw.

“My concerts are full of energy, more energy than most people would imagine”

Harry Styles: the song that he does not perform in concerts but his fans claim it
Johnny Depp waves the tricolor flag and wears an Ecuadorian bra at a concert in New York | People |...
The party, the GPS and a threat: this was how 'Otoniel' planned the death of a popular music singer