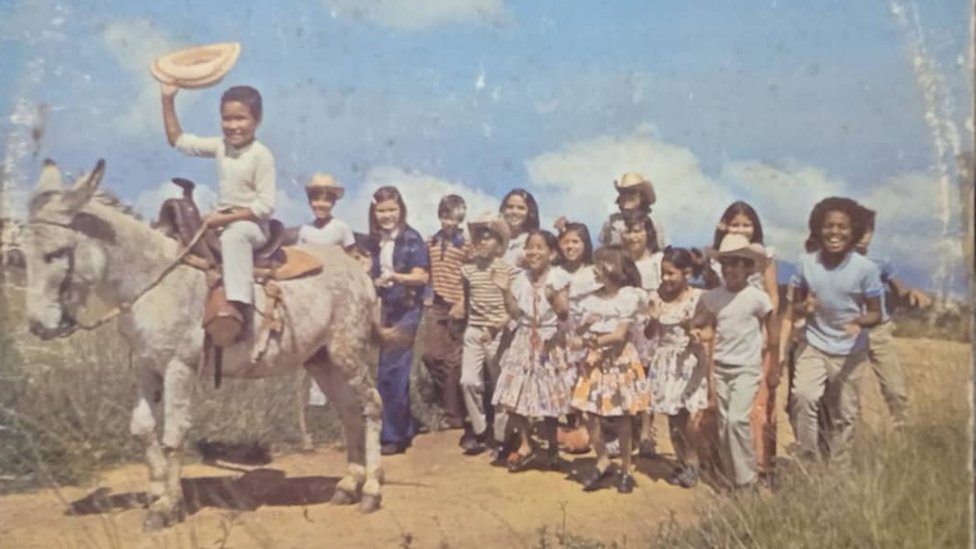 If you were born in Latin America after 1975, it is very possible that those lyrics evoke memories of your childhood and that you are even listening to them again these Christmas days.

The Christmas carol “Mi Burrito Sabanero” or “El Burrito de Belén”, of Venezuelan origin, has been performed by a very wide range of artists: from the legend of Venezuelan music Simon Diaz even the Colombian singer Juanes passing by Elvis crespo.

But no version has had the impact that the one recorded, more than 40 years ago, by a group from the Venezuela Children’s Choir known as The Rondallita.

That 1975 version is the most popular and not only is it a memory of more than 40 years ago, but to this day it continues to be one of the reference Christmas carols in Latin America, Spain and the Latin community. from the United States.

In fact, the American magazine specialized in music Billboard has included this version of “Burrito de Belén” in its list of the 100 best Christmas songs of all time..

What not many know is the story of Ricardo Cuenci, the 8-year-old boy who voiced the burrito.

“Better in a child’s voice”

“When in 1975, the teacher Hugo Blanco composed the song of the Burrito Sabanero, first it was sung by the renowned musician, also Venezuelan, Simón Díaz,” tells BBC Mundo Aguasanta Márquez, current director of the Venezuela Children’s Choir.

“But Hugo Blanco thought it sounded better in the voices of some children, children’s voices,” he adds.

Márquez says that it was at that time that maestro Blanco contacted the Venezuela Children’s Choir, and its director then, the also renowned arranger Raúl Cabrera.

“What Professor Cabrera did was the choral montage, the musical arrangement for a children’s choral montage,” explains Márquez. “Hugo Blanco chooses with the teacher [Cabrera] to the children who are going to record ‘El Burrito Sabanero’ “.

And as a soloist, they choose little Ricardo Cuenci, 8 years old.

Now, 55 years old, Ricardo tells BBC Mundo from Venezuela that from a very young age music was part of his life: “When I was 4 or 5 years old, my father participated in a llanera music group.”

“Y I would grab a box of matches, put brads in it and he began to play maracas because he saw others playing maracas. “

It was because of that interest in music, and thanks to the great friendship that his father had with Raúl Cabrera, that Ricardo ended up singing in La Rondallita. And so the boy heard “El Burrito de Belén” for the first time.

“I remember we were recording with the Venezuela Children’s Choir in a studio. Hugo Blanco was there, Raúl Cabrera was there and I listened to the song that Simón Díaz had recorded,” says Ricardo.

“And I started humming in the hallways of the studio and singing El Burrito Sabanero. Then they come out and listen to what I’m singing […] And since I knew I had a way to sing it, I sang it […] It even had to be recorded as Burrito Tabanero, because I didn’t know how to pronounce S. And that’s how it remained “.

Already recorded “El Burrito de Belén” with Ricardo’s voice, Raúl Cabrera was in charge of spreading it, according to Márquez, of the Venezuela Children’s Choir.

“When the album came out, maestro Cabrera worked in a record store that belonged to his father. And it was he who took the records to jukeboxes all over the country. And what did he do? burrito sabanero so they could start putting it in the jukeboxes “.

The puck began to gain traction. It first arrived in Caracas, and from there it began to internationalize.

“From there, La Rondallita [el coro infantil venezolano] began to become famous abroad, especially in Puerto Rico […] La Rondallita travels to Puerto Rico, but the funny thing is that the children who traveled are not the same ones who recorded. Ricardo Cuenci was not among those who traveled“recalls Márquez.

Although Ricardo was not on that first La Rondallita tour, he told BBC Mundo that he received an invitation from Cabrera to travel everywhere to sing.

“He traveled! We made two trips. The second time we stayed for three months and we sang everywhere. In zoos, at night, in hotels, in parks. Wherever they asked us, he sang.”

Despite the fact that it was a short period of time that he was on tour with La Rondallita, Ricardo says that there were moments that began to disappoint him.

In addition, Ricardo says that never saw any kind of royalties of the version of “Burrito Sabanero” despite the popularity that the song acquired throughout the region and that it still maintains.

“As a child, one never knew anything about that, neither about money, nor about charges … We were never paid a bolivar divided in half, neither to me nor to my companions from La Rondallita.”

But one of the biggest disappointments was when Ricardo’s father rejected an offer that could have changed his life: to be part of Menudo, the popular Puerto Rican children’s group to which he belonged, among others, Ricky Martin.

“And the moment came when that was turned off. I turned off. I didn’t want to know anything more about Burrito de Belén or La Rondallita or anything like that. And I dedicated myself to my business, to my family, to my things.”

He tells that he studied music, that he learned other jobs, that he worked in the fields and that currently does it with advertising.

But given the still interest in La Rondallita’s version of “Burrito de Belén,” Ricardo says he has maintained contact with his former choir companions, and is even planning to release a new version of the famous Christmas carol.

“There is a scoop now on the 24 [de diciembre] with my granddaughter. I’m going to YouTube a piece, a song. And it is also with my uncle, who is Tony Cuenci, a tremendous tenor singer. It is so that they are surprised that there is still talent for a while. “

Today, with the support of his family, Ricardo feels grateful with the donkey and with the happiness that it has been able to bring to so many people around the world.

“May every child in the world listen to that song and be filled with joy, it fills me a lot.”

My burrito sabanero: the Venezuelan boy who popularized the Christmas carol