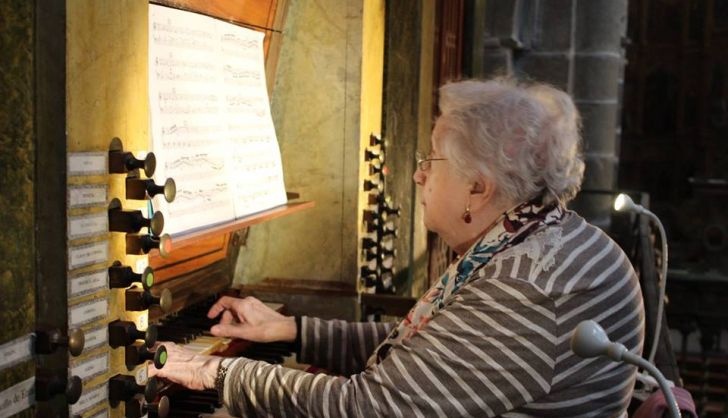 The Cathedral of Santa María de Ciudad Rodrigo hosts this Wednesday, at 8:00 p.m., the first of the six organ concerts included in the Organ Concerts Cycle of the province, ‘The centenary sounds’, organized by the Diputación de Salamanca and coordinated by Samuel Maíllo, organ professor at the Conservatorio Superior de Música de Castilla y León.

The inauguration of the first cycle will feature a luxury organist, Montserrat Torrent, emeritus professor of Barcelona and dean of Spanish organists who, at 95 years old, opens this cultural proposal in Ciudad Rodrigo with free admission until full capacity is reached. Previously, at 7.40 pm, there will be a projection of the nonagenarian organist and a short conference.

Montserrat Torrent, known as ‘La Dama del Órgano’, is possibly the most important Spanish organist of the second half of the 20th century and the beginning of the 21st. At the age of 95, he continues to offer concerts throughout the Spanish geography and abroad. In addition to her concert side, she stands out as a trainer of a new generation of organists who are teachers at conservatories and first-rate soloists.

In addition to the Miróbriga concert, five other locations -Alba, Lumbrales, Palaciosrubios, Villares and Béjar- participate in this first cycle, with free admission. In addition to bringing it closer to the residents of these towns in the province, this first cycle aims to promote knowledge of the organ, enhance it as a cultural activity and help its maintenance and conservation.

The organ of the Cathedral of Ciudad Rodrigo is the most important after the organ that is in the New Cathedral of Salamanca. These are two instruments by Pedro de Liborna Echevarría, one dating from 1725 and found on the Gospel side. The organ box on the Epistle side, with more than 30 registers and effects, was made by maestro Churriguera.

This is the program of the first series of concerts until October 22: