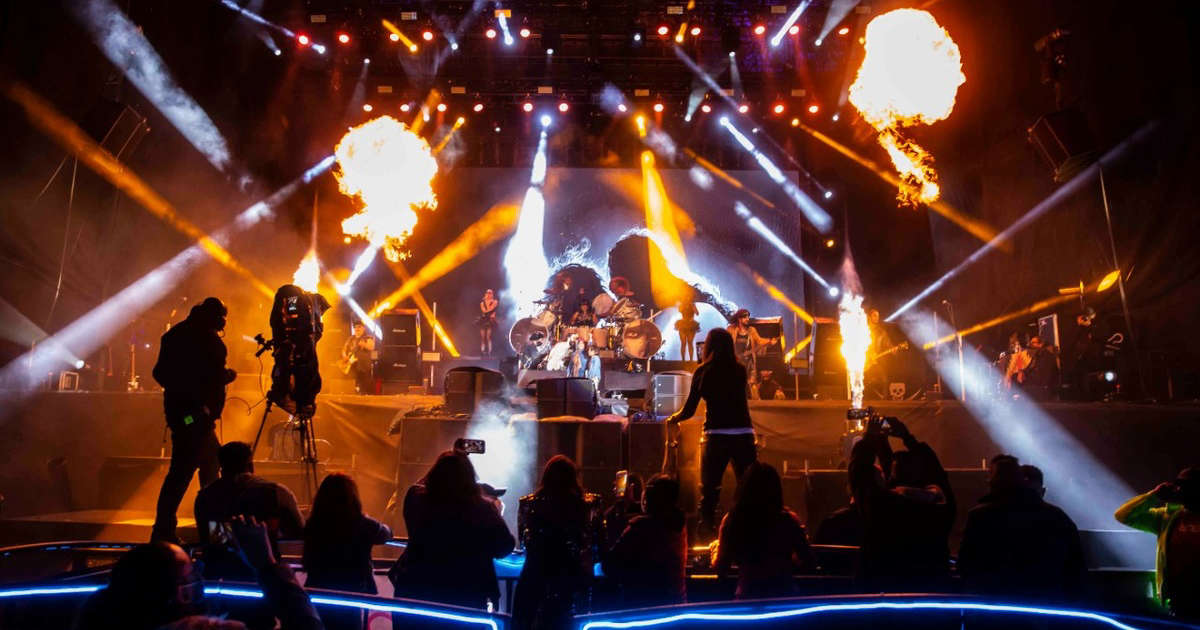 With all the health and safety measures in turn 4 of the Hermanos Rodríguez Autodrome at 8:00 p.m., access was opened for one of the concerts most awaited by rock fans, Moderatto outdoor.


At 9:04 p.m. the stage lights were turned on and videos of fans on the screens playing the best of the group’s hits and minutes later they appeared Jay de la Cueva, Mick Marcy, Iñaki Vázquez, Elohim Corona, Xavi, Roy Ochoa to start his show with the song “Will not be able”, “Isabel” and “Sentimettal”.

“Good night sinners”Said Jay also known as Brian Amadeus And followed “We have missed them a lot, I see a lot of makeups, I propose that this show becomes a hip if such psychiatric ones need them to indulge in the damn sinners party “ and continued with “Surrender” and “If I am a crime is to rock”.

“We need your energy, in the beginning all the darkness and God said that the battery is haha ​​damn sinners”And proceeded Elohin the drummer of the band to do a solo in front of the hundreds of people who shouted with excitement and then present the song “Zodiac”.

“You are already beginning to feel the noise and Moderatto army They know that we miss them a lot and we come to play until the sun comes up; Every night and every place we can visit is going to be an incredible night, even though everything is changing and although this division exists, it is necessary that the noise in your heart be expanded to feel more alive than ever, the reason for this meeting is la la music to be able to connect and enjoy life ”.

One of the songs they used to remember the music of the eighties was “Fall in love with meWhat interprets Daniela romoAfter the song, he asked that the cell phones be turned on to play with the lights in harmony with the instrumental music, which caused an energy to vibrate among the entire audience that amounted to just over 8,500 people.

“The pandemic that scares me the most is not being empathic the only one with the other knowing that we all have different needs“Jay said to the microphone who left everything on stage, showed his passion and the nostalgia he had for returning to live shows.

“Dying slow”It was one of the songs that made the public explode but nothing like “I already saw it coming”Which was undoubtedly the song of the night, since part of the audience went up to play the melody with them, 3 on guitar and one of the girls who came up gave him the instrument, also invited one more woman to play the drums and another girl on drums and one of them gave her as a gift.

Charlie Watts was born in London in 1941 and began drumming in clubs in the early 1960s. AP

His passion for drums led him to play in various London R&B clubs. | AP

Charlie Watts helped the band to become one of the symbols of rock in the 60’s. AFP

In addition to taking part as a drummer, he designed the covers of the band’s first albums. | AFP

The goal of the band was to get Charlie Watts back in shape for the big 60th anniversary celebrations. | Reuters

In 1964 he married Shirley Ann Shepherd, whom he met before the success of the Rolling Stones. | AFP

In 2022 they will release their first album of original songs by the band in 17 years. | AFP

The tribute to Charlie Watts

“Honoring Charlie Watts tonight may he rest in peace, are you ready to go wild? Hands in the air, Brian went to the piano to play and sing “Autos, Moda y Rock & Roll”.

“Long live Charlie WattsHe shouted almost at the end of the night.

“All this damn sinners is incredible, thanks Andrea Alexa and Mayra ” He told his showgirls and dancers, in addition to of course naming all the members and they performed “Thanks”.