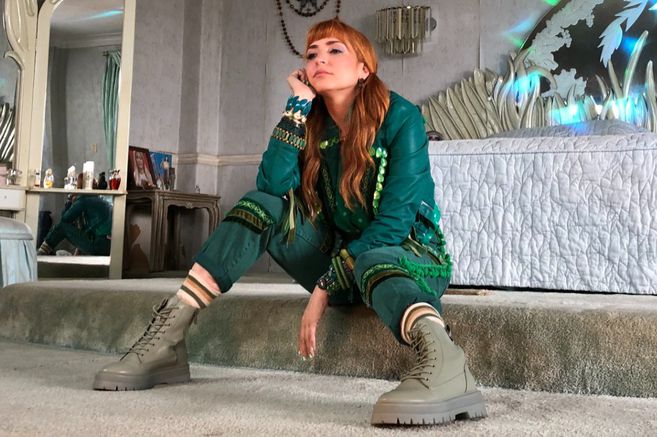 Mirella Cesa defines the video for “Locura” as an explosion of colors, in a search towards the interior, with hints of nostalgia and melancholy that contrast with the rhythm and interpretation of this single.

After captivating the sound of the bolero “When You Look at Me” and taking her original proposal to countries like Mexico, the Ecuadorian singer-songwriter Mirella Cesa presents the video clip of her single “Locura”, a composition by Guayaquileña under the production of Marcel Ferrer.

“A madness of colors, in a search towards the interior, with hints of nostalgia and melancholy that contrast with the rhythm and interpretation of this single”, is how Mirella Cesa defines the concept of audiovisual production that is developed from a setting of the 80’s, under the direction of David López and the production of the same artist.

The film shot in the city of Guayaquil confirms the versatility and artistic qualities of the composer, who, in addition to being involved in the musical process, is in charge of giving life and aesthetics to her stories through their styling.

Mirella Cesa, who has been an ambassador of Ecuadorian music and culture to the world, is nominated for the new edition of the Heat Awards as “Best Andean Region Artist” for her outstanding representation in the music scene.

(You may be interested in: “Getting the stadium was the most difficult”: 10 years of Paul McCartney’s concert)

The awards that reward the best of Latin music from Latin American soil have previously recognized the career of Mirella Cesa who has been nominated in different categories throughout its seventh editions, in 2015 she was competing for the Heat balloon as “Revelation Artist” , in 2016 and 2017 for “Best Female Artist”, and in 2019 and 2022 for “Best Andean Region Artist”.

Mirella Cesa continues with her promotional tour of the United States and Latin America, where she will visit countries such as Colombia, in May, and the Dominican Republic, in June.

Mirella Cesa presents the video clip of her single “Locura”