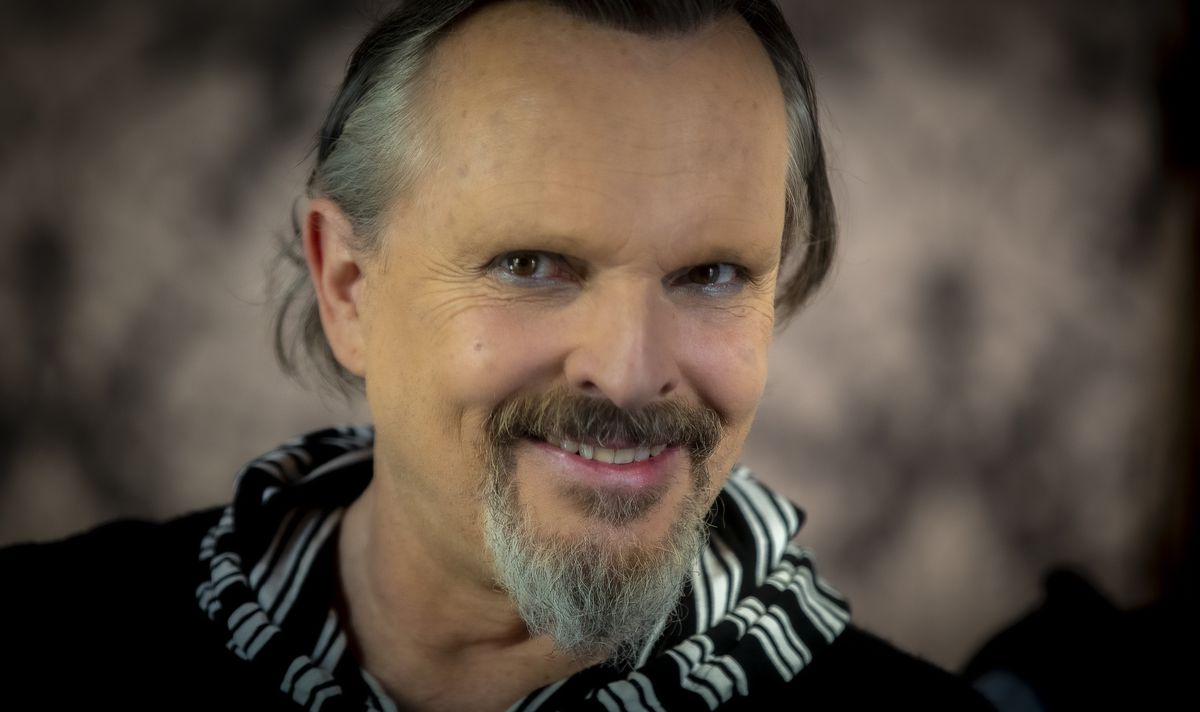 It is 11 in the morning in a room of a luxury hotel in Madrid. Miguel Bosé faces his second day of interviews to promote his book. Dozens of companions have passed, one immediately after another, before the artist in this junket, that habitual practice of publishers, record companies and production companies to milk the protagonists of their releases until the last drop in the media. Bosé has asked – demanded – his editors that the questions of the press, radio and television, be limited to his autobiography. We journalists know it, just as he knows that we will ask him about his coronavirus denialist stance, if in something we esteem our profession and we do not want to pass for Martians or for their own public relations. Bosé’s book, the first he writes, it is fair to say, is an enjoyable, exciting, hard, tender and torrid read at times, written with a good pulse, taste and narrative rhythm. I look at the title of the volume, and its signature, written on the cover in what looks like someone’s handwriting, linking one letter to the other with curls and tails like in that flowery children’s handwriting until they release the letter. wrist. I ask him:

Is this your handwriting?

Do you have several?

Yes, just like I have several coats, and they are different. But, let’s see, let’s see where we go.

I am curious about having multiple letters. Why did you choose that to title your biography?

Because it is so, because perhaps it is the one that is closest to the child that I was, I do not know why you ask that.

What question would you like me to ask you?

Ask me about the book. “How is your book?”

And what headline would you like me to get?

Oh please, what a boring thing. ‘An extraordinary life’, that would be the headline for me, because that is the band that I have put to the book. But you are not going to put that one.

When did you realize that it was extraordinary? His life, I say.

You don’t realize it, not even comparing yourself to those around you. If your head is underwater, you can’t breathe, you have to get out. And that’s what I’ve done, get out of the water. I have realized that my life was very beautiful, unique, exceptional. But living it, you don’t realize it. Just like, seeing it every day in the mirror, you don’t see the things that happen to your face.

Who have been the man and woman in your life?

My father and my mother.

Has no other love marked you so much?

That’s an ‘Oedipus’ and an ‘Electra’ from a book, right?

Well, you see in the book that my mother certainly stimulated Oedipus. All mothers do. The father, I suppose, stimulates the Electra with his daughters, and with the sons, so that they somehow grow up, they create competition.

In its pages he recreates harsh scenes in which his father mercilessly mistreats him as a child. Did he need to take out that pain, or I don’t know if he was bitter, to explain and explain his subsequent reconciliation?

There is no rancor in the book. If you see it, it is because you interpret it that way, but no, never. They are hard memories, sometimes very unpleasant, very ugly, but because what I tell was like that. The portrait is faithful to the memory I have. Without sweetening it. There are the textures, the gestures, the lights, everything I tell was as is. If he did tell it, he had to tell it like it was.

Did you cry writing?

If much. Because it takes out things that were parked. By pulling the thread of a memory, you remember what happened next, what consequences that had. You know that these things flow, that, if you let them go, things start to come out from the top of the mountain into the sea of ​​stories.

Does it cost more to be a father or a son?

It is more difficult to be a son. For me, I don’t know on a general level. I know there are people who find being a parent uncomfortable, who don’t know how to handle things. That doesn’t happen to me. It was difficult for me to be a son because I realized that I had to survive two holy monsters, who had very long shadows and overshadowed everything.

The portrait he makes of his great-grandfather Reme, the woman who took care of them, is moving. What was she in her life?

The backbone of the family. The only one who had a head between two gods, two stars who were spoiled for everything, and who did brutal things. Tata Reme was the manager, the one who held the head of the house. And luckily it was.

Are you afraid to repeat your parents’ mistakes with your own children?

They are not repeated because there are things that are naturally discarded, or changed, or redirected. I have made no effort to give my children what I lacked, or to separate them from what hurt me, or what didn’t teach me anything. It just happens. And then you can realize that, in effect, you are giving them what you would have liked them to give you.

Why did you title your book ‘The Son of Captain Thunder’?

For me song of the same title, which explains the relationship my father and I had. It is the most unpublished of all the unpublished that I tell in the book, and I would like you to revisit it before reading it.

In the book he talks openly and explicitly about his bisexuality. Have you always lived without cabinets?

But he does tell it in the book.

Who is your worst enemy?

Right now, my worst enemy is you.

It has a dozen songs that we know by heart, inserted in the collective memory of the country. Is that your best legacy?

Yes, especially in music, because in addition, these themes correspond to different very specific moments in the history of this country.

Do you think your controversial views on the pandemic have eroded your reputation?

I’m not going to talk about things that don’t have to do with the book. You were told. You can ask and I cannot answer.

OF HIS FATHER AND HIS MOTHER

Miguel Bosé (Panama, 65 years old), only male child of the myths Luis Miguel Dominguín and Lucia Bosé, believes that the time has come to tell the first part of a “unique, beautiful and exceptional” life. Yours. The result, Captain Thunder’s son (Espasa), are lively and vigorous memories that begin before the conception of “Miguelito”, as he calls himself as a child, and end right with his legendary debut as a singer in Florida Park, before the rapt eyes of his parents, already separated and reunited to accompany him. His stormy coexistence with the volcanic Dominguín, with whom he felt he would never meet his expectations. The very free atmosphere of the Bosé house when, finally, his mother decided to abandon the bullfighter. The adolescent Miguel’s first loves with Helmut Berger and other men and women. His almost familiar relationship with 20th century myths, such as Picasso and Ava Gardner. All these events, and more, told without sparing hair, signs, sweat and tears, parade through the pages of the autobiography. The continuation, the no less convulsed life of the adult Miguel and the artist Bosé, will soon be seen in a television documentary that he is preparing now.

Miguel Bosé: “It has been more difficult for me to be a son than a father”