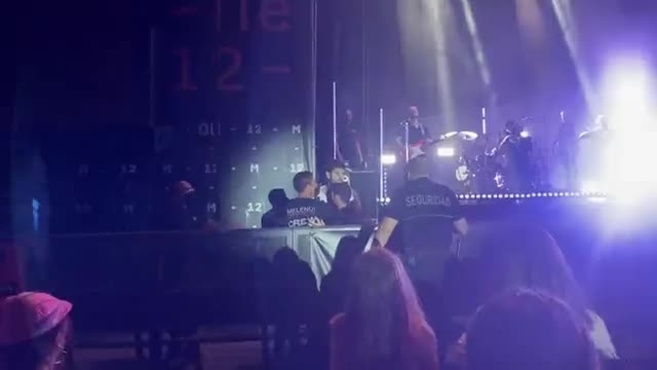 AAlthough it would not have been what was desired, the truth is that the concert that Melendi has offered his fans in Alicante has ended up marked by the incident starring the singer himself with a security guard in the middle of the show. The artist did not like the way of proceeding of the guard with the public and would not hesitate to recriminate it, getting to face him and having to be necessary the intervention of other employees who watched over the maintenance of order to prevent them from coming to blows.

Everything will happen in the middle of the concert, when suddenly Melendi realizes that something is happening between a security guard and various fans of the first rows. Far from letting it be overlooked, the singer would interrupt his performance and leave the stage fully lit and ready to address the employee. It would be the rapid mediation of his companions that would prevent the singer from acceding to his goal.

However, the barrier posed by the rest of the security guards would not prevent Melendi from showing her indignation and saying four things to the worker that had disturbed his performance. “Don’t touch people, asshole!”, I blurted out while being held just a meter away. After that insult, he would continue his attempt to justify his reaction. “Don’t touch people, man!”

In view of how things had become, the security employees would lead Melendi back to the stage while urging her partner to leave that area as well. “Get over there, you idiot!”, the artist concluded as they parted their paths. An anger and a reaction in defense of his fans that would receive the applause of those attending the concert while everyone tried to return normality to the show in which the singer tried to present his new song ‘Likes and scars’ that will go on sale at the end of the year in which he criticizes the existing posture on social networks.