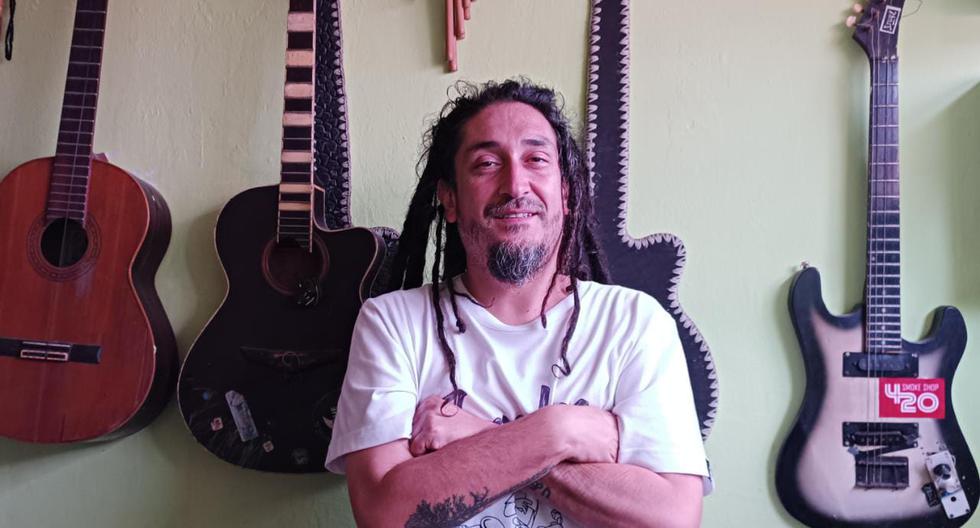 MC Jona, lead singer of the successful reggae band gondwana, is in Lima to give a series of concerts. He talked with Peru21 about music, his favorite places in Peru, and the cabal that never fails him when visiting our country.

Jonathan Elías Aguirre Pérez is 40 years old. He was born in Valparaíso, Chile, and in that same city he lives with his wife and raises his two children. He grew up listening to reggae and said that Gondwana was one of his favorite bands when he was at school. At that time, the group was consolidating in Latin America.

Years passed and he turned his passion into his career, he started making music and, by fate, Gondwana changed singers and was summoned. The rest is history. They currently make extensive annual tours, their main destinations being Mexico and the United States.

LOOK: I-Locks Labbé: “We are the benchmarks for other bands”

What is your relationship with Peru?

MC Jona says that he has come to Peru since he was little on family trips. In 2004, he returned for work reasons. From that date, his travels became constant and he currently has many collaborations with Peruvian musicians.

“I had to come to Peru from a very young age. I made good friends and in 2004 I returned to launch the album Informativo Popular. I come here a lot to make music, we have made videos, we have had to travel a lot. I have also had to come with Gondwana and thus I have been able to share with many musicians, record, we always try to get the most out of coming to Peru”, he pointed out.

“I have had the opportunity to present songs from my new album, which came out last year, I have been able to travel to various cities in Peru,” he stressed.

He also highlighted the work of artists from our country. “We have recorded several songs with Gustavo (of the band Nyjah Bredda), we have done several projects with different musicians. The Peruvian reggae scene has a long history., has established artists, such as Ysabel Omega, bands that travel abroad. I think the movement is always a wave, sometimes it comes and goes, but it is maintained over time, new groups are always coming out. Peru has very good musicians and the mix of fusions that they do with their culture is also very valuable”, he affirmed.

He also considered that “perhaps the reggae scene is not gigantic or voluminous, but it is constant and has managed to stay strong over the years,” he said.

What is it like to be part of Gondwana?

“I love Gondwana very much, I admire them. I’ve been listening to them since I was a kid and coming back has been a pleasure, it’s gratifying to move in the circuit that they have. We go to the United States almost every year because there are many Latinos and all Latinos know Gondwana, it is a band that is known worldwide. It is an iconic band and no one is going to take that away from them”, stated the artist.

He also highlighted the vision that the group had and the decision to internationalize. “The Gondwana were very visionary because after they did the Viña Festival (2001 and 2003), they set their career abroad, they began to travel. It was the icing on the cake for me because when I joined the band in 2011, they were already at a super high level, ”he said.

He also referred to comparisons with other vocalists. “Obviously, all changes cost and there are people who prefer one or the other, that will always happen, but people know that Gondwana has a structure and will be an iconic band that transcends ages,” she said.

“The records with Quique Neira marked generations, they marked many of us and from there when a lot of changes happen (in the band) one also understands it because there are people who feel affection for one and will want, like in a soap opera, that come together and be the happy ending I get it and I know there are fan comments but I get it and I try to take it with humor. In this year that I returned, it was as if I had not left, the people were very respectful, “he concluded.

Regarding his projects, he pointed out that he is open to collaborations with other musicians. “I have a more local way of working. I have a very good relationship with Cultura Profética, Los Cafres, We have gone on tour together, but you also have your moments, now I have collaboration with people who I relate to more closely”, he pointed out.

The Peruvian cabal that does not fail

MC Jona says that, in addition to being a fan of Peruvian food, he loves to travel to various cities in our country.

“I love going where nobody wants to go or where it costs more to get there. I love opening those doors, getting to know and betting on what can happen, not losing that spark that gives the uncertainty of not knowing where I am going or what will happen. It is like a small adrenaline rush and here I have had to get to know a lot of places, even on vacation, ”she added enthusiastically.

“A cabal that I have is to go to Polvos Azules to buy shirts. I have to wear a T-shirt for everything to go well. Besides, the boys always ask me for a ride. When I come, we also go to eat ceviche. Here there is very good coffee and I am kind of addicted to coffee, here we have a friend who has a little bar called ‘Cafeteador’ in Pueblo Libre and we always end up there,” he revealed.

When will your concerts be in Peru?

Yesterday, Friday January 20, he performed in Chosica and Punta Hermosa. Today, Saturday, she will be at a disco in Colán and tomorrow, Sunday, in Trujillo singing songs from Gondwana and her hits as a soloist.

In addition, he promises to return in February for some gigs in nightclubs in the capital.

What are Gondwana’s greatest hits?

This reggae band has left its mark in Chile and throughout Latin America. It was created in 1987 in Chile by I-Locs Labbé after listening to The Police at the Viña Festival. It has 11 albums and dozens of successful songs such as: Sentimiento Original, Armonía de Amor, Piénsame, Mi Princesa, Verde Amarillo y Rojo and Antonia. In 2022 he returned to Lima after four years to perform at the Reactiva Perú festival and celebrate his 35th anniversary.

MC Jona, vocalist of Gondwana: “My cabal is to go buy shirts at Polvos Azules”