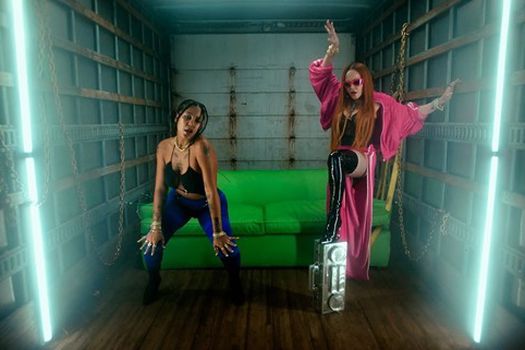 Tokischa is an emerging artist who deconstructs the common norms and perceptions surrounding the role of women.

madonna has released the music video “Hung Up on Tokischa”the new remix of his worldwide hit “hung-up”with the participation of the versatile Dominican rapper Tokischa.

The collaboration premiered with the special live performance of this duo at Madonna’s Pride event, at Terminal 5 in New York in June, after the celebration of their collection Finally Enough Love: 50 Number Ones. Recently, Madonna was mentioned about creating “Hung Up” with Stuart Price on the podcast “Song Exploder,” offering fans a rare glimpse into the making of the song, which is already charting on the charts.

Tokischa is an emerging artist who deconstructs the common norms and perceptions surrounding the role of women. Her style is crude, an authentic trap that few artists dare to pursue. In her world, there is no fear of showing society what she does, what she likes and who she is. She promotes a way of life free from hypocrisy and gender stereotypes. Her tone of voice is instantly identifiable and is another factor that characterizes her and makes her one of her distinctive songs.

In addition to his pioneering dembow tracks, which have already become hits in his native Dominican Republic and other Spanish-speaking countries, he has attracted millions of views on YouTube, mostly over the past three years. Tokischa has managed to capture the attention of international fans through two critically acclaimed collaborations, with Rosalia (Linda and La combi Versace), work with J Balvin and now Estilazo’s new release with Marshmello.

According to Billboard “The dembow is gaining global recognition… [como] the iconoclastic promise of the genre, Tokischa has shone with his innovative and unapologetic music, bringing the thriving local scene of the Dominican Republic to the forefront.” In the month of April, attentions towards the artist increased, with the statement of the New York Times: “The last rebel of Latin music does not hold back… and speaks her truth… a fearless feminist whose insurgent spirit is leading the way… an agitator and queer and sex-positive cultural figure whose performances make a gesture toward liberation.”

Madonna releases music video for her song “Hung Up on Tokischa”