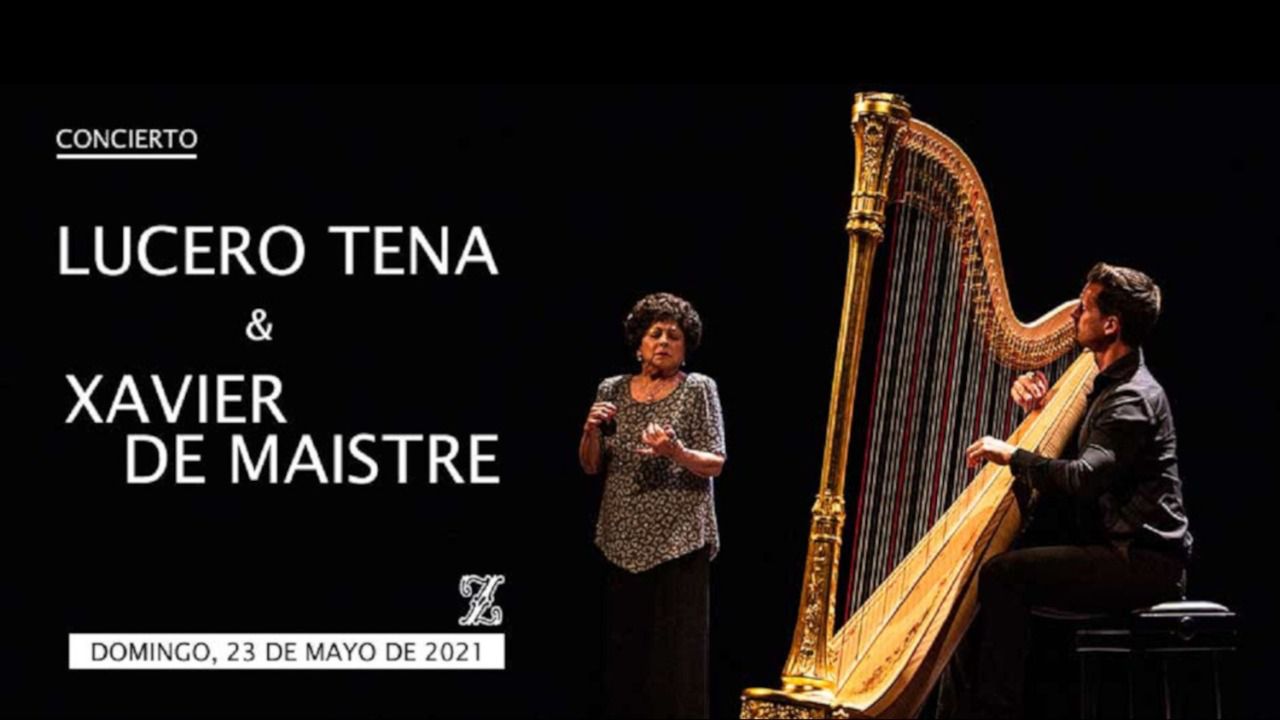 If there is someone who deserves everything, artistically and personally, that is Lucero tena. This is how his fellow artists know it, such as the immense harpist Xavier de Maistre who will accompany her at the next concert Sunday, May 23 (6:00 p.m.), and also the public, who adore her unconditionally. Tickets for this long-awaited recital of the Cycle of Concerts of the Teatro de la Zarzuela is it so sold out for days.

The appointment will serve, as for years have been all his public appearances, of exciting tribute to a unique life and career, difficult to emulate even from a distance.

Lucero Tena and Xavier de Maistre will offer some of the most beautiful pages of Spanish music. The passionate and bizarre tolling of her castanets, accompanied by the sweet and evocative sound of his harp, will bring to life essential works by Padre Soler, Mateo Pérez de Albéniz, Francisco Tárrega, Isaac Albéniz, Enrique Granados, Manuel de Falla or Jesús Guridi.

Lucero Tena has marked an unmistakable personal style to his interpretation of castanets with the incorporation of this instrument as a soloist in concert works. Throughout his career he has performed as a soloist in concert halls around the five continents, with conductors such as Lorin Maazel, Mstislav Rostropovich, Rafael Frühbeck de Burgos, Jesús López Cobos, Sergiu Comissiona, Franz-Paul Decker and David Afkham, among others. In recent seasons he has played at La Folle Journée Festival in Nantes (2013), Tokyo (2014) and Warsaw (2015), with the National Orchestra of Spain in 2015, at the Berlin Philharmonie, conducted by Plácido Domingo in 2016 and new directed by Domingo at the Teatro alla Scala in Milan in 2017.

In 2018 he appeared, together with Xavier de Maistre, at the Ravenna and MiTo Festival festivals and in concert with an orchestra at the Paris Philharmonic and at the Hollywood Bowl, together with the Los Angeles Philharmonic Orchestra conducted by Plácido Domingo. Throughout the 2018-2019 season he continued his tour with the harpist Xavier de Maistre through Germany, Spain, France, Lebanon, Japan, China, and also offers concerts with orchestra in Muscat, Belgrade or Madrid. At the Teatro de la Zarzuela Lucero Tena has participated in the Doña Francisquita show, directed by Lluís Pasqual.

He was born in Toulon (France). He began studying harp at the age of nine. His studies culminated in Paris with Catherine Michel and Jacqueline Borot. He became the first French musician to join the ranks of the prestigious Vienna Philharmonic Orchestra. De Maistre is an artist who is redefining the possibilities of his instrument. Aside from new works commissioned by composers such as Krzysztof Penderecki and Kaija Saariaho, he performs works such as Smetana’s Ma Vlast with great precision, presenting arrangements of orchestral works. De Maistre has performed with large orchestras under the direction of conductors such as Bertrand de Billy, Daniele Gatti, Kristjan Järvi, Philippe Jordan, Riccardo Muti, Andrés Orozco-Estrada, André Previn, Simon Rattle, Heinrich Schiff and Gilbert Varga. He performs at the Schleswig-Holstein, Salzburg, Rheingau, Vienna and Verbier festivals, Budapest spring and the Würzburg Mozart. And he collaborates in chamber ensembles with artists such as Diana Damrau, Mojca Erdmann, Daniel Müller-Schott, Baiba Skride, Arabella Steinbacher and Magali Mosnier. Since 2001 De Maistre has been a professor at the Hamburg Academy of Music. He also gives master classes at the Juilliard School in New York, the University of Toho in Tokyo and the Trinity College of Music in London.

De Maistre records exclusively for Sony Music: in 2009 he won the Echo Klassik Award for Instrumentalist of the Year. And in 2012 the album Notte veneziana was published, with the Ensemble l’Arte del Mondo, which entered the top ten of the classical music charts. Xavier de Maistre plays Lyon and Healy on a harp and performs for the first time at the Teatro de la Zarzuela.