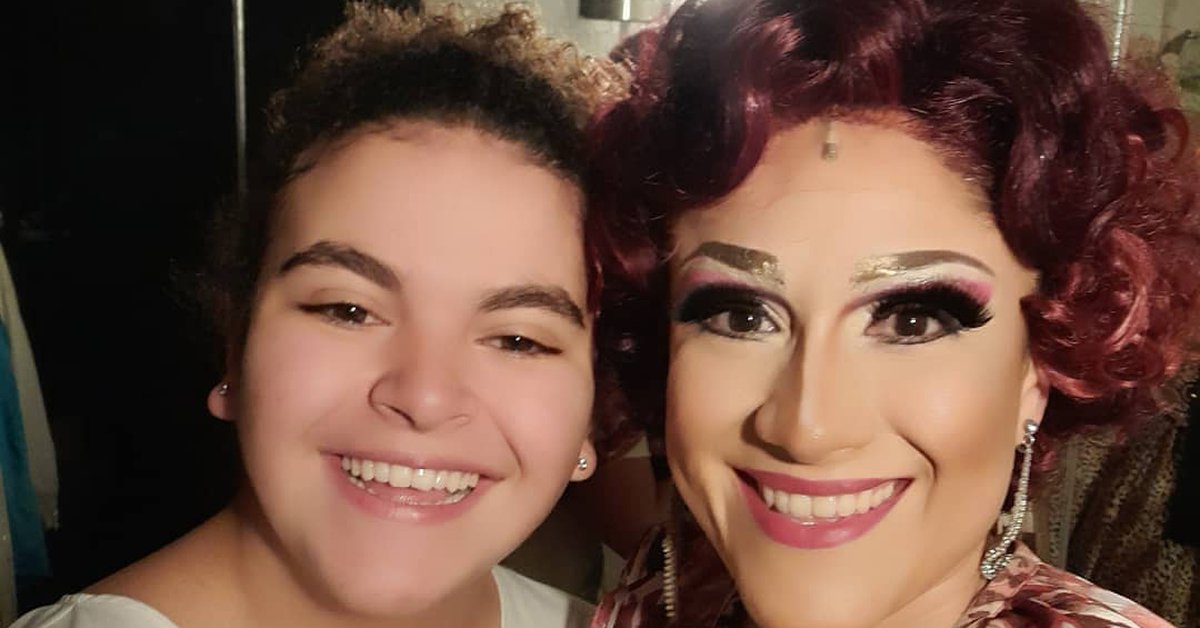 Lucerito Mijares has attended the theatrical play on several occasions The Cage of the Locas and He has taken the opportunity to make TikToks with his friend Gerry Pérez Brown. In the video social network you can see them dancing to various themes, but the one that stood out the most was the song of Lucero “Tell me”.

In the clip you can see the Drag Queen “Silvia”, a character played by Gerry, next to her is Lucerito with a big wig with a big pThey are like a curly hairstyle his mom had when she was younger.

The choreography began with a close-up of Pérez while the daughter of Mijares he pretended to sing a part of the song. “Papiripao tell me who is in your head.” They followed the dance to the beat of the song and doing literally what the letter says, such as pointing to the heart and counting the moles on the back; In the next part of the song, the drag decided to throw herself on the ground to match the verse “Don’t come any closer, be calm, I’m falling out of the hammock.” The youngest daughter of America’s Bride He kept moving and showing off his great hair.

This is not the first video that the young woman makes with the actor, as it is also They have made parodies of a couple of audios of the influencer Chiky Bombom ´La Pantera´, who is characterized by its positive messages. The first clip that Lucerito and Gerry decided to make was with the audio “Good morning! Today we woke up … rich, tasty, delicious because I can, do I deserve it? Yes, I have the personality ”. Throughout the audio they showed their best steps showing their great attitude.

In another short film you can see them dancing a rumba, with the audio of the Dominican. “I need new friends, rumberas, spectacular and succulent who want to give everything until …”. At all times, the big smile that characterizes Lucero’s daughter stood out.

Lucerito has had an excellent relationship with Rogelio Suarez, another actor from the same play which also characterizes a drag. The actor shared a picture by his side at the end of May and in a very unusual way, Mijares’ youngest daughter attended fully made up.

The photo was accompanied by a loving description for the young woman: “I adore you, Amika. I’m your megafan ”, he also added some heart emojis. In the photograph you can see Lucerito’s characteristic smile, but he had never shown his face with makeup.

His participation in his parents’ concert “Siempre Amigos” was a success (photo: screenshot Instagram / @ luceroftbuenfil)

In the snapshot, the singer appears with lips highlighted with a metallic tone lipstick, she decided to use false eyelashes and a shadow gradient on the lids of his eyes, he used a black tone for the ends and approached his tear duct with a yellowish tone, in addition to a black outlined and hair collected.

The young woman’s fans were surprised by the incredible change in Lucero’s daughter. The image was shared in the various fan clubs, having thousands of reactions and comments that highlighted how good his make up and the great resemblance he had with his mother.

This is how Mijares’s daughter decided to put on makeup (photo: Instagram / luceromijaresh)

Lucerito returned to attend the production that is presented at the Hidalgo Theater In the month of June And in the same way, she decided to apply a little makeup. Through social networks, they shared a couple of images in which you can see Mijares’s daughter with her big smile, with a reddish shadow on the eyelids, a light black outline, also accompanied his look with a very light red lipstick, a little blush on the cheeks, in addition to longer and fuller false eyelashes than last time, managing to highlight his eyes.

“I was peeing”, Bárbara de Regil suffered an accident inside her camper
“It’s complicated”: Mariana Ochoa revealed that OV7 members ignore her
Rauw Alejandro finally spoke about Ester Exposito while preparing for the MTV Miaw