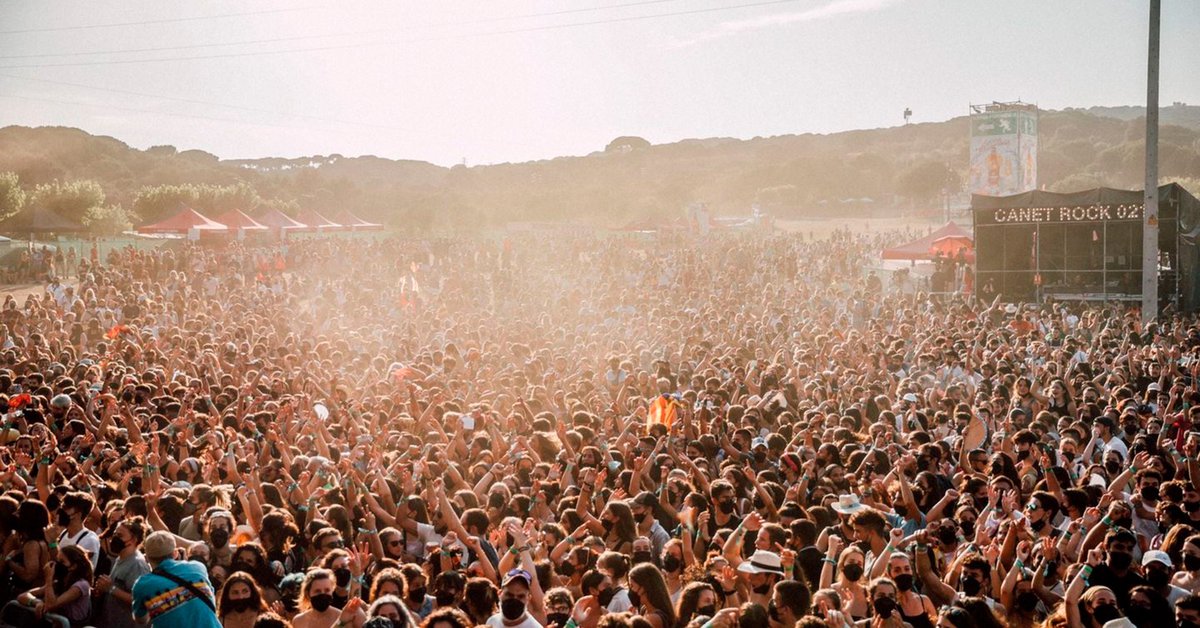 “We know that we have done an antigen test and that we are abroad, but it is necessary that we all put on the FFP2 mask that we give you at the entrance of the festival. The mask is part of the protocol that allows us to live this experience. Let’s use it out of respect for others and for the love of music ”. With this text in their official accounts, the festival’s production Crossroads of Barcelona he encouraged people to behave well. But the responsibility was not only in the public: the production of a festival of these characteristics, the first without social distance still in a pandemic, was a challenge.

Cruïlla has been made in the capital of Catalonia since 2005 and, as its name in Catalan indicates, it is a “crossroads” of styles, artists, cultures. Precisely for that reason it has always been an attraction for music fans from other parts of the world and a danger for the expansion of the coronavirus in this stage (will it be the end?) Of the pandemic.

As Europe transits the fifth wave, it looks suspiciously at the numbers of Spain: since the beginning of the pandemic there have been 3,937,192 cases of coronavirus and the current cumulative incidence is 316.17 cases per 100,000 inhabitants. Argentina exceeds that figure with 595.61 per 100,000. Spain has a high figure (although it is almost half that of Argentina), but it also has a pro: 50 percent of the Spanish population has completed the vaccination cycle, while Argentina has not yet reached 11 percent.

These figures, which are bad, but not so bad (16 deaths from coronavirus in Spain in the average of a week, against 447 per week in Argentina) encourage the entertainment sector to resume the march and thus Cruïlla arrives to take place on July 8, 9 and 10 with 25 thousand people per date, without social distance and a thousand cares. Although it is mandatory to wear a chinstrap, to enter the venue the organization distributes free FFP2 masks at the entrance and if at any time you have to change it, there will be specific points where you can do it.

It does not matter that attendees are vaccinated and wear a mask, everyone at the festival must take a test to enter, including children who are accompanying an older person. For that, the production has enabled a space in the Center de Convencions Internacional de Barcelona (CCIB) to do the tests. Obviously, only people whose test is negative will have the possibility to enter the festival. The system works out quite well: after purchasing the tickets, the assistant receives an email with the data to be able to reserve an appointment online for screening. And the one who goes all three days? You must take a test every day before entering, the price is included in the entrance … Scabies with pleasure does not itch.

With all these cares, the festival held in the Parc del Fòrum recorded at 9 p.m. on Thursday that there were 123 positives for coronavirus among the first 13 thousand attendees. That was not the only bad news, also the positive of Sergi Sala, from the band hiphopera Mr. Goose, took away the possibility of opening the festival. The opening was left to Xavi Ojeda aka Sr. Wilson. The talents are local as artists from outside Spain are still wary of traveling to other countries.

Even the Cosquin Rock that he was going to have an inaugural celebration at full steam in Fuengirola, Malaga, will settle for a Pre Cosquín: on July 31 with La Maravillosa Orquesta del Alcohol (from Burgos) and on August 1 with the Madrilenians of Sidecar. Although they are two great exponents of Spanish rock, the poster with Argentine names will be relegated to later.

It all started with Life

One week before the return of the Crossroads, was carried out – not without some setbacks – the Vida Festival in the Masia d’en Cabanyes, in Vilanova i La Geltrú. Ten thousand people a day (from Friday 2 to Sunday 4) made a revolution for these times. The attendees also had to take an antigen test before entering, but a failure of the validation system of the QR codes of the applications that were to record those results caused delays and anger that manifested themselves on social networks.

On Twitter, many users showed images of the toilets (more than a hundred) with their arms crossed because their electronic devices could not read the applications of the assistants. When the health professionals finished their workday at 10 at night, the testing began to be carried out by volunteers. The delays and discontent multiplied and many returned home after losing a lot of time and unable to enter the festival that had an impressive line-up: Thursday 1 with Vetusta Morla, Friday 2 with Nathy Peluso and Saturday 3 with Love of Lesbian.

Vetusta Morla at the Vida Festival, in Vilanova (YouTube)

The truth is that despite the failures, this operation had been the first of a series of events that will have incorporated this type of testing, QR, nurses and applications. As a result of the screening on the first day of the festival, a total of five positives were recorded among the 8,200 attendees and another two among the 1,200 festival workers (attendees, press officers, musicians).

Another of the multitudinous festivals and without social distance that took place at the beginning of this month was the CanetRock although like him Crossroads suffered a casualty. The Valencian band Zoo, one of those that headed the poster, had to suspend its show due to cases of covid in the team.

After a year and a half with a devastated entertainment industry, the return of the festivals brings a light of hope for what is to come, a new normal that is not at all pleasant, but which will have to get used to.

Mariana Fabbiani said goodbye to her cycle in El Trece: “The programs pass, but the links remain”
Calu Rivero posted a photo smoking hemp and referred to the medicinal properties of cannabis: “Plants that heal”
Nati Jota was a victim of sexual cyberbullying: “I’m crying and shaking”