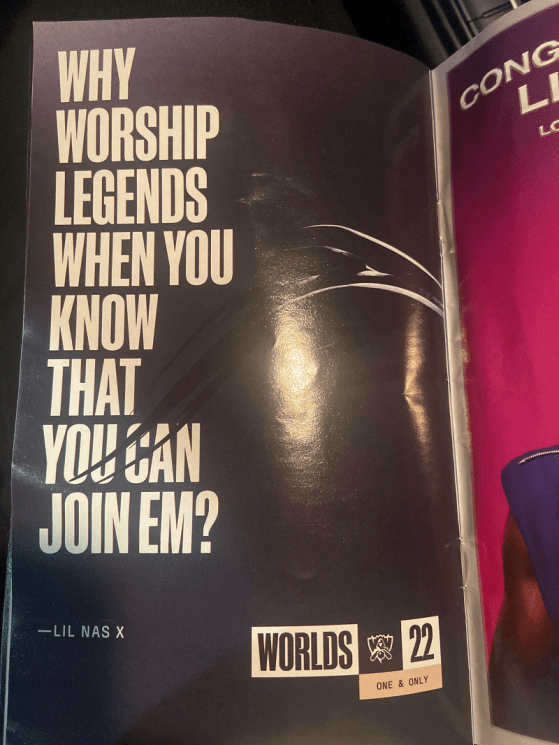 Lil Nas X will be the protagonist of the song of Worlds 2022 from League of Legends. Riot has made this announcement official through a video on its social networks in the purest style of The Office, in which the American rapper is the protagonist of it.

In the final section of the video, which lasts three minutes, small fragments of the song are heard, which It will be called Star Walkin’ and that the next one will be released September 23.

Thus, Riot is looking for a new musical genre for the main theme of the event, since for several years, we have seen a quite similar style in them, something that the community has complained about with the release of the latest songs, especially the last of 2021, Burn it All Down.

Lil Nas X has already sung this song at his concerts

As Reddit user Nightmonkey121 posted on the dedicated League of Legends subforum, the rumors have come true. In a flyer for a Lil Nas X concert, a phrase from the American singer about the LoL World Championship appeared with a photo that read as follows:

“Why worship legends when you know you can join them.” The Worlds 2022 logo also appeared in this image.

In fact, and as you can see in the video, has already sung this song in several concertsso you already have the spoiler of how this music will be that will accompany us in this World Cup and your letter.

Lil Nas X already collaborated with Riot last year in the final phase of the LCS with a spectacular video of plays of the main stars of the league, while one of his most famous songs, Industry Baby, played in the background.

In addition, he visited the 100 Thieves offices when they won the LCS last year to support them on their way through the League of Legends World Cups, which were held on European soil, so his relationship with esports and, specifically with Riot’s MOBA Games is more than latent.

League of Legends is looking for a new Creative Director, a role focused on telling the stories of Runeterra in the best possible way and that could satisfy some of the requests that the community has been repeating for years.