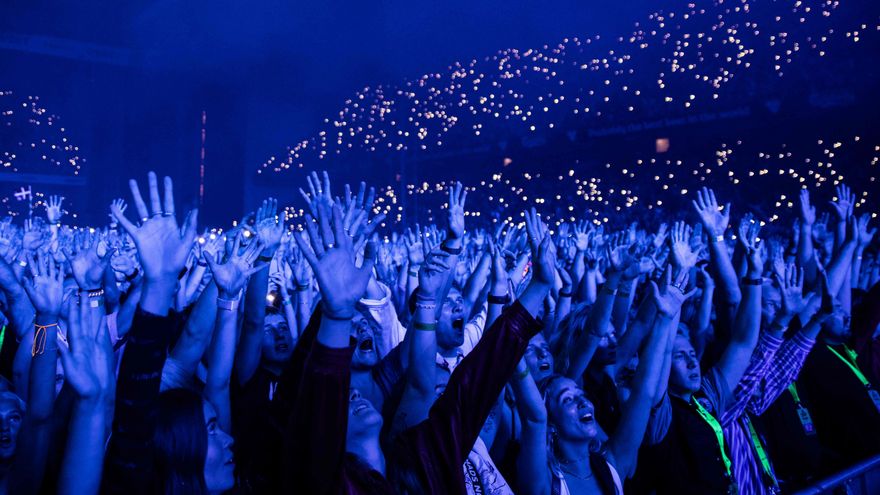 Just as, in the difficult 2020-21 academic year, Spain distinguished itself by being one of the few European countries where it was possible to perform certain types of concerts (small format, seated audience), the tables have turned and now it looks like a restricted territory if we are talking about larger calls. While in the north of the Pyrenees there are sudden steps towards normality, implanting the covid passport or even without it, here they send limits similar or identical to those of months ago (especially in Catalonia), and what promoters perceive it as a comparative offense: the go-ahead that sports can gather, in stadiums and pavilions, a much larger audience than music.

Health has raised the capacity of the football and basketball leagues to 60% (stadiums, outdoors) and 40% (pavilions), thresholds that in Catalonia they have been set down at 40 and 30%. Thus, the Camp Nou can now gather some 40,000 people in a football match, while, if it is a concert, the limit is still 3,000. From the APM (Association of Musical Promoters) they warn that “if there is no clarification in this regard, we are facing a comparative grievance& rdquor ;, since “if a stadium is opened at 40%, that should also be valid for any concert & rdquor ;, indicates its president, Albert Salmerón, which asks the institutions for a “quick correction & rdquor ;.

Now there are few artists available who can summon 40,000 people, but there are many who could benefit from an increase in capacities: last week, the Colombian Camilo performed at the Estadi Olímpic with the 3,000 tickets sold out for days, and from Live Nation They note that, if the capacity were equated with that of football, a thousand more could easily have been sold. And a covered venue like the Palau Sant Jordi (17,000 seats), at 30%, could see almost double those 3,000 attendees.

Neo Sala, founder and director of Doctor Music, is “outraged & rdquor; that “Music continues to be discriminated in this way without any justification & rdquor ;, while Tito Ramoneda (president of The Project), he wonders “why in a space like the Palau Sant Jordi, currently hyperventilated, it is not possible to gather more people for a concert and thus equate ourselves to European countries that are practicing 100% capacity & rdquor ;, and he is expeditious in his request to Salut: “Sirs of the Procicat, open your eyes, we are dying and this has to start & rdquor ;. Promoters suspect that soccer’s lobi outweighs music’s. “This is about who has more power and it is not the same as Barça going bankrupt to my company breaking up,” meditates Xavi Manresa, director of Cap-Cap.

At the heart of the matter is the implementation of the covid certificate, which in other countries is underway but, in Spain, the courts have overthrown in Andalusia, Galicia, the Canary Islands and Cantabria. In Catalonia he is defended by Salut, who claimed him from Health, as reported last week by Secretary Carmen Cabezas, seeking protection in a “state strategy”. The APM says to maintain a dialogue on the matter with the Government, although it sees there “A certain reluctance & rdquor; for “the fear that the judges will revoke it & rdquor ;, points out Albert Salmerón, who sees the passport as “very positive in a transition phase & rdquor ;, not only to increase capacity, but also “to reactivate the concerts in the halls & rdquor ;, an emphatically punished sector, where“ there are many promoters of small tours who are very affected & rdquor ;.

As Salmerón adds, there are even countries that discard the certificate and “open normally & rdquor ;, case of Denmark, where the covid is no longer considered a ‘socially critical disease’, and where this Saturday 50,000 people gathered at a concert by the post-punk group The Minds of 99 at the Parken Stadium in Copenhagen. Neo Sala is committed to that normality without a passport, “given the high vaccination rate we have in our country & rdquor ;. Denmark registers a vaccination level of 74.1%, six tenths below that of Spain (and its Nordic neighbor Sweden, with 59.9%, will lift all restrictions at the end of the month). At United Kingdom, already in August mass festivals followed, such as Reading-Leeds, despite observing a rise in the contagion curve.

Warming up the tours

The international tour schedule in Europe shows signs of movement for the first time since March 2020, with striking cases, such as the autumn ‘tour’ of Elton John. The dates initially planned for the Palau Sant Jordi (October 22 and 23, moved to May 2023) have been occupied by Oslo, with stops within an itinerary through scenarios such as the Accor Arena in Paris or the O2 in London and other squares in the center and north of the continent.

Given these comparisons, the promoters ask to be able to operate with full capacity this fall, arguing that vaccination levels can reach 80%. Looking up more, they glimpse, or wish to glimpse, a 2022 at full throttle. “Next year’s tours are all already closed, whether they are announced or not & rdquor;, explains Xavi Manresa. “The rooms are all occupied, and whoever wants to organize a ‘tour’ now must surely go to 2023 & rdquor ;. Neo Sala appeals to the British example to think that “the rest of the European countries, Spain included, will follow the same path and in 2022 we will have concerts with full capacity again & rdquor ;.

To all this, there is awareness that the coexistence with the virus for which it is committed in the United Kingdom or in Denmark generates objections in at least a part of the scientific community, due to the risk that it may entail that it gives rise to new variants. The APM presents itself as “receptive to everything that comes from the scientific world & rdquor ;, emphasizes Salmerón, although he defends that “There must be a certain courage to break the dynamic in which we are and go to a situation where we can go back to work; if not, we have a serious problem as a society & rdquor ;.