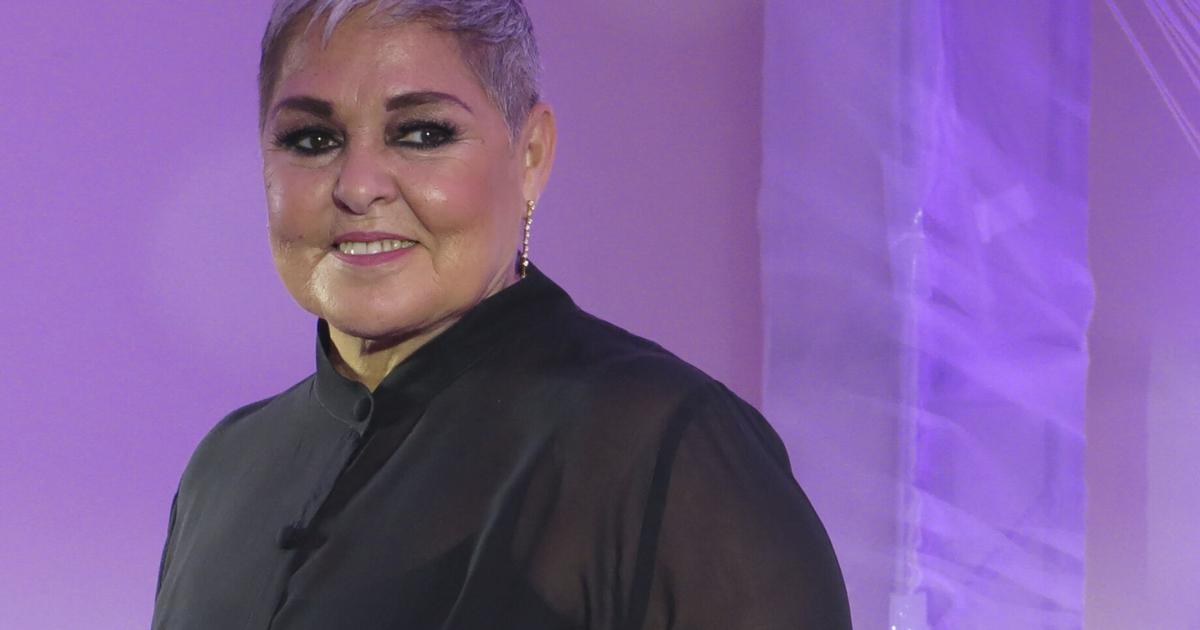 MEXICO CITY (AP) — On stage she is a lioness; in her heart, a mother, grandmother and survivor. With more than five decades of artistic career, Lupita D’Alessio will be recognized this week with the Legend Award at the Latin American Music Awards. The Mexican singer opened the doors of her house to speak with The Associated Press.

“D’Alessio is not always in a good mood,” acknowledged the star nicknamed “The Sleeping Lioness” at the beginning of the interview, because at press conferences she has a reputation for being a careful artist who does not like inappropriate questions.

The award that she will receive on Thursday at the Latin AMAs ceremony in Las Vegas was a surprise for her.

“I burst into tears, it was something very nice,” he said. “I don’t like ‘the legend’ because I feel like they’re talking about ‘La Llorona’, but it doesn’t matter, it’s accepted, it sounds nice”.

At the Latin AMAs you will not only receive your statuette; She will also perform a medley of her greatest hits, among which “Mudanzas”, “Sorry my love”, “Lies”, “Innocent poor friend” and “Neither war nor peace”. And staying true to her way of working, she will sing entirely live, she said, without playback.

The award is dedicated to her parents — “these are Lupita D’Alessio’s roots, my teachers,” she said — “to Mexico that saw me grow up, Latin America and the United States.”

D’Alessio, whose real name is Guadalupe Contreras Ramos, was born on March 10, 1954 in Mexico City, he clarified in the interview, and not in Tijuana as many web pages point out. Because of her parents’ work — both in the arts — he grew up moving frequently, including to that Mexican border city as well as Peru and Panama. His mother, Euralia Ramos, was an American soprano originally from Santana, California; her father, Poncho D’Alessio, a television presenter who arrived in Mexico as a newborn from Naples, Italy.

“My mother taught me the technique, she was my singing teacher,” said D’Alessio, while she learned discipline from her father.

D’Alessio was training to be a professional 200-meter butterfly swimmer at her beloved Club Atlas in Guadalajara. She had been selected nationally and they called her for the Pan American Games, she said, but her father did not let it be hers.

She also studied classical ballet and received a scholarship to go to New York, but her father did not give her permission to move to the United States either. “You are not Pavlova”, she told him then. “You are going to sing.”

The family moved once again to Mexico City, where D’Alessio began singing professionally as a teenager: her debut album, “Mi corazón es un gitano,” was released in 1971, as portrayed in her biographical series “Hoy I am going to change” of 2017.

“To sing to him, there was no other. (My father) used to say ‘if you don’t work, you don’t eat,’” he said. “It was very intense. Not like the bioseries, it’s exaggerated there, but he was a very disciplined man. We had to be there early, and that stuck with me: I’m the first to arrive and the last to leave, always”.

On a personal level, D’Alessio went from the harshness of her father to a stormy marriage to Mexican singer Jorge Vargas, whom she met when she was 17 and he was 31, during the promotion of her first album.

“I cried a lot because I didn’t want to be a singer; I wanted to start a family, get married, have children, be a normal woman. But when I got married, I didn’t get a normal man,” D’Alessio said.

The couple faced the death of their firstborn, Jorge, at 28 days old due to sepsis.

“The first blow of my life was that,” said the singer, who was 18 years old at the time. “The boy was beautiful, he looked a lot like my dad, with blue eyes, red hair, white… I held him in my arms for 10 days and from there he went to the hospital. Those were the hardest days of my life.”

The couple eventually had two other children: Jorge (1974) and Ernesto (1977). In the meantime, D’Alessio released albums such as “Toy World”, “I swear I’ll never come back” and “Get out of here”; She acted in telenovelas such as “Ana del aire”, “Paloma” and “Pacto de amor” and in 1978 she won the OTI Song Festival performing “Como tú” by Lolita de la Colina, which projected her to international fame.

But the violence that Vargas inflicted on D’Alessio made the relationship unbearable for her. He conditioned her: if she left him, she would not see her children, who were then 2 and 4 years old.

“Tell me one thing, do you stay with a man who hits you or do you leave?” Said the artist. “What are you doing? Are you left without your music, without the dream of being a great singer? … Do you stay frustrated all the time for your children, even if your children see that they mistreat you, or should I leave because of my music?

“I had no choice,” he said. “I took it for music and I think it was the best decision for me.”

A decade later, her children decided to leave Vargas and ran away from home to go live with her. The reunion, however, was complicated: D’Alessio was married to the Mexican musician César Gómez, with whom she had her youngest son, César, after having had brief marriages with the Uruguayan soccer player Julio Canessa and the Argentine musician Sabú. .

“It was a situation of jealousy, between my children, between my husband,” she recalled. “They did not understand in their minds why I sent them to Canada to study (the older ones); they thought he wanted to push them away.”

At the same time, D’Alessio began to develop a cocaine addiction that had her hooked for two decades. She also spent a couple of weeks in prison for tax problems in 1993.

When she believed that she had no way out, her son Ernesto, who by then already had his own career as a singer and actor, put her on the road to rehabilitation supported by a renewed faith. She recalled that she was alone in an apartment she was renting for her parties when she called for help unable to even stand up. In a drawer she found a card that her son had left her with the contact of a pastor.

“I called him and he said: ‘Stop using and I’ll go there,'” he said. “I opened the door on all fours for the pastor, I couldn’t stand up and he picked me up when he saw me… I hugged him and told him: ‘I want to receive Christ, I want my life to change.’ And that’s where I think he entered my heart, ”she said moved.

Now she is delighted with her stage as a grandmother of eight grandchildren and happy to have recovered the rights to record her own music, half a century after they were taken from her when she signed a record contract while still a minor.

At 68, D’Alessio remains active in music. His most recent single, “Ese hombre”, will be part of a live DVD from the Mexico City Arena to be released on April 29, and on June 23 he will return to the same venue for a concert with Paquita la del Barrio. She will also perform with the Mexican diva for Mother’s Day on May 10 in Puebla; on May 12 in Oaxaca at the Guelaguetza popular fair, on May 14 in Guadalajara and on May 20 in Monterrey. Between September and November she will tour the United States with the Mexican singer María José “La Josa”, with concerts in cities such as Denver, Seattle, New York and Chicago.

D’Alessio, who in 2019 received the Award for Musical Excellence from the Latin Recording Academy, stated that the theme of her repertoire that best defines her at this time is “Mudanzas”.

“It’s a song that talks about how women can change at any time,” she said. “She is no longer the Sleeping Lioness; she is more awake than ever, by the way”.

The Latin AMAs will air live on Telemundo on Thursday starting at 6 pm Mexico City (2300 GMT). They can also be seen on the Peacock streaming service, the Universo cable channel and throughout the Americas on Telemundo Internacional.