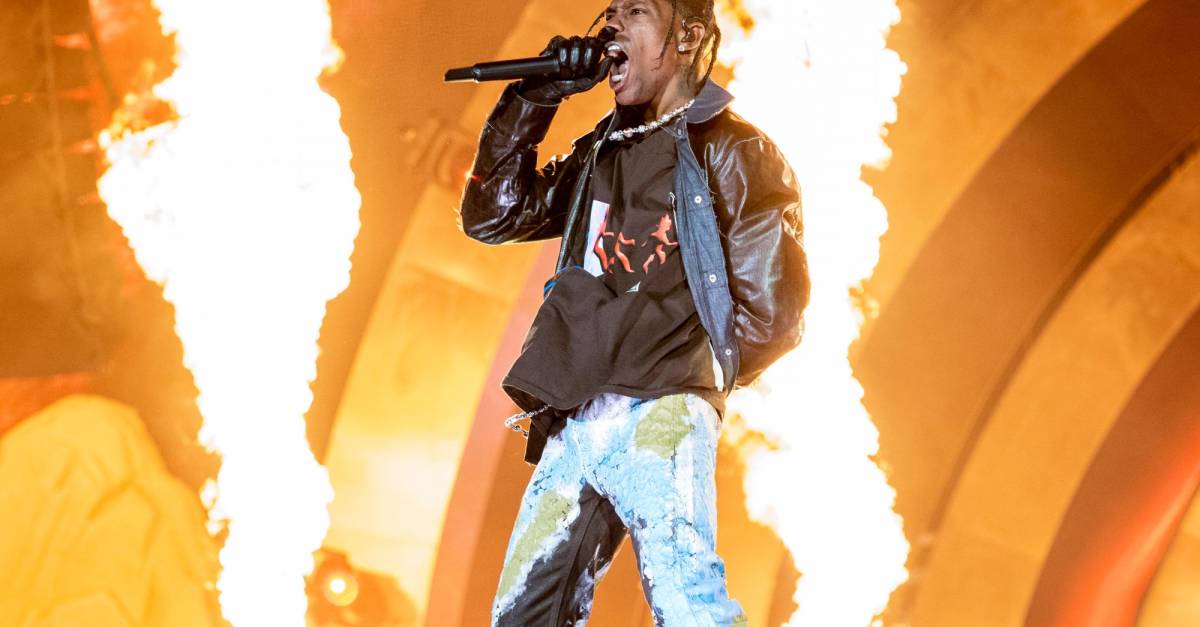 Fame, scandals, chaos and rage are the ingredients of a controversial and provocative artist.

In 2019 a Travis Scott fan declared in Look Mom I Can Fly, the rapper’s biographical documentary: “You can fall and everyone will pick you up. It’s strange how the music of one person can make everyone into such a family. ” Reality denied it at once: on Friday a crowd enraged by Scott’s presence on stage devastated hundreds of people, leaving eight dead and dozens injured.

Upon hearing the news – the act concluded – the thirty-year-old singer trilled: “I am absolutely devastated by what happened last night.” However, this is not the first time that excesses and disorder have altered their concerts. His has been a career marked by anger and provocation.

Born in Houston – by the name of Jacques Berman Webster II – Scott is a cultural phenomenon. To get an idea of ​​his status in the media ecosystem, it is enough to know the name of his spouse: Kylie Jenner, a member of the clan known in much of the world for airing his private life on the television series Keeping Up with the Kardashians.

Unlike his wife – the daughter of a celebrity and an Olympic medalist – the rapper did not always have the cameras behind him. After spending a few years with his grandmother in the suburbs of his hometown as a child, the rapper returned to his father’s home. He interrupted his studies at the U. of Texas and traveled to New York with the plan of dedicating himself completely to the music industry.

Scott’s music – nicknamed La Flame – won the favor of young audiences. From Rodeo, album released in 2015, the sales of their albums have grown with the rush of foam. Astroworld, of 2018, was his swan song: in a few days he broke records by reaching the first Billboard 200 position. Such success took him beyond the borders of hip hop by transforming him into a leader of the pop industry. Add to that his marketing prowess – he promotes events with astonishing efficiency on social media.

In short, an explosive cocktail. Its impact is visible. For example, in the first minutes of the aforementioned documentary, the rapper’s magnetism is perceived: he rebukes, gives orders, challenges, jumps from the stage into the arms of the public. At times, the viewer has the impression of attending a political rally, a religious event, not a normal recital.

To understand Scott’s rise and the events of Saturday, the psychology professor Ricardo Andrade mentions a capital work of Freudian thought: Psychology of the masses and analysis of the self. It explains the process “of identification with the leader who occupies the place of the ideal.” When this happens, the subjects become mass and consequently lose critical functions, emotional self-regulation, among other capacities.

“In the mass you are not you. In the mass people lose inhibitory functions. In the mass, you lose your individuality and for that reason you do things that you wouldn’t normally do ”, says Andrade. The foregoing is completed by the head of the Eafit Psychology department Johnny Orejuela when explaining the role of leaders: “They generate a reference towards which to orient ourselves, they interpret the ideal self. They also free us from helplessness, they give a direction to our life ”.

With the decline of identity referents –God, the family, the homeland–, citizenship is left in a kind of drift, a kind of orphanhood. This also explains the emergence in all fields of figures who are attractive to audiences due to their high doses of radicalism. This trend covers not only entertainment, it reaches politics, economics, sports. The bond of the charismatic leader with his followers is in many ways similar to falling in love: he idealizes the other to the point of considering the slightest criticism of the beloved as a major act of disloyalty.

La Flame is well aware of its power. In 2018, the video Stop trying to be God (Stop trying to be God). There he incarnates a lumpen version of Jesus: he baptizes, leads a flock of sheep while his disciples dance around. In order to cross the borders of what is well seen, he even appears in heaven disguised with the garb of God the Father.

The irreverence of his manners and the rawness of his lyrics have led him to be compared to Eminem, Tupac and Snoop Dog. Conflicts with the authorities are a springboard for his figure: on two occasions the police have accused him of inciting chaos in his presentations. By pleading guilty and paying the fines, he has thus far been spared the consequences. Of course, this is the short way to increase audience impact: Jim Morrison’s arrest on stage bears this out. After being photographed in 1967 with wives, the lead singer of The Doors reached the level of legend.

According The New York TimesBefore the start of the program, Houston Police Chief Troy Finner spoke with Scott about public safety concerns. The logistical forecasts were surpassed by the effervescence of the assistants, fed, of course, by the artist. Videos on social media and police reports record an environment out of hand. One of the most viewed posts was Jenner’s Instagram story: she recorded clips from the concert. With the scandal red-hot, she defended her husband by stating that if she had known the seriousness of the situation, “I would not have continued the show and I would not have continued recording it.”

There are stories – many apocryphal – of what happened on Friday. For example, a security officer is said to have been injected into the neck with an unknown substance. Therefore, the Police opened two tracking lines: homicides and narcotics. Attorney Tony Buzbee announced a lawsuit against Scott and the festival organizers.

While waiting to establish those responsible, La Flame promised financial support for the survivors as his name and face appear in a thousand parts. Faced with all this, the university professor Juan Antonio Vázquez recommends avoiding moral judgment and trying to understand the complexity of the matter: “In this there are technical and logistical reasons, bad forecasts and the effervescence that a cultural phenomenon can produce (…) . What do we see in those artists? The answers to many questions we ask ourselves. They are the expression of a society ”.

The responsibility of leaders in any field is to avoid the passion of their followers. And that of the rest of the mortals choose guides less prone to stridency and radicalism. However, the dynamics of the civilization of the spectacle portend the opposite.

Learn why Travis Scott is a controversial rapper for his concerts