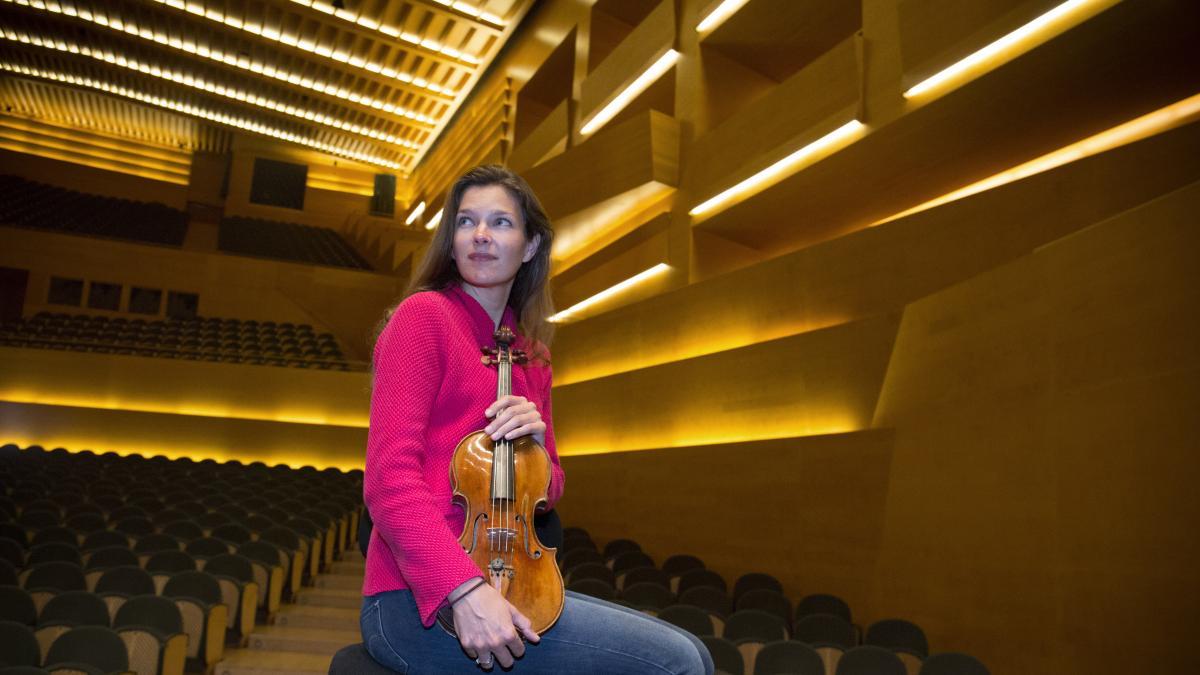 I return to the great symphonism at L’Auditori next season. From Brahms to Rakhmàninov, Mahler, Bruckner, Stravinsky, Shostakovich or Richard Strauss, the programming will be expansive in the Barcelona equipment, which will continue to bet on heritage (present in 32 programs) and on new creation. In fact, the 430 concerts it has presented this Wednesday – with performances by the OBC, the Municipal Band or the Tarta Relena – contain 30 premieres and 17 commissions.

Among others to Joan Magrané and Bernat Vivancos, guest composers, but also to leading international names such as Thomas Adès and Luca Francesconi, in collaboration with the Bamberg and Goteborg symphony or the Los Angeles Philharmonia. Francesconi also has the violin of Patricia Kopatchinskaja, in an important co-commission that will be released shortly in Porto.

The participation in more than one project by some musicians will lead to authentic artist portraits: Adès himself will direct the OBC, and will also sit at the piano for a Winterreise with tenor Ian Bostridge, who in turn will sing Britten at another time. Scottish violinist Nicola Benedetti can be seen in the chamber cycle but also playing Mozart.

And Denis Kozhukhin, that other Russian piano phenomenon, will perform at a Rachmaninov Festival to be held in March with the full concert. He will do it together with the OBC, after having recorded it with Simon Rattle, while another keyboard star like Nicolai Lugansky interprets preludes and Études tableaux, And watch out for the tandem in a Kozhukhin recital with the violin goddess Janine Jansen.

In addition, the cycle of great international orchestras will count on the efforts of Ibercamera and BCN Clàssics, who will bring the Mariïnski Theater Orchestra and the Stuttgar, Vienna and Düsseldorf symphony, all four with their headlines: Valéry Gergiev, Teodor Currentzis, Andrés Orozco-Estrada and Ádám Fischer. And the incomparable pianists Eugeny Kissin and András Schiff will return to L’Auditori alone.

L’Auditori approaches this season as a second movement of a program structured in three consecutive seasons with a unitary artistic narrative that goes from genesis (creation as the theme of the 2020-21 season), development (21-22 with the love and hate theme) and the denouement (with the death and return of the 22-23).

Theme of the season

International orchestras will also perform works around the theme love and hate, with the 7th by Beethoven or the 5th by Mahler

Thus, love and hate as the motor of passions or polarization of opposite energies. Well, the proposals of the international orchestras will also revolve around this idea of ​​duality, with works such as Beethoven’s Seventh, Mahler’s Fifth or Hero life of Strauss.

The OBC will have batons such as Pinchas Zukerman, Alondra de la Parra, Ludovic Morlot, Ilan Vokov, Matthias Pintsch, Nuno Coelho or Anja Bihlmaier. And among his soloists, Sheku Kanneh-Mason, Marco Mezquida, María José Llergo (these two with a work by Palomar), Pierre-Lauren Aimard or Pablo Barragán, in addition to the aforementioned Patricia Kopatchinskaja and Ian Bostridge.

The orchestra will address Don Quixote from Strauss, to Schéhérazade of Rimski-Korsakov, Daphnis et Chloé of Ravel, The sacre du printemps Stravinsky, or the Romeo and Juliet by Tchaikovsky and Prokofiev. He too Cello Concerto of Elgar or the Symphonies of Brahms. And other authors of the land such as Jordi Cervelló, Enric Palomar, Miquel Oliu or Benet Casablancas.

The OBC will go on a tour of Scandinavia with one of the most relevant Spanish conductors, Juanjo Mena

But the highlight of the OBC will be its tour of Scandinavia in April. And with one of the most relevant Spanish directors on the current scene, Juanjo Mena. The group will visit cities in Germany (the Hamburg Elbphilharmonie), Sweden and Finland, with a soloist on cello such as Pablo Ferrández, who will perform the Saint-Saëns Concert and complete the program with the Fantastic Berlioz and Danses of Don Quixote by Gerhard.

Here is another classic Barcelonan room that, apart from making a management effort, has had immense luck in budgetary terms when it comes to overcoming the crisis that has caused the pandemic. If the Palau de la Música has a refund of the looting of Fèlix Millet, L’Auditori has the possibility of returning to the box for the 2019-2020 season thanks to the commitment of the consortium administrations to cover the structural deficit delays, and to the investment that the Madrid-Barcelona cocapitality will entail in 2021.

There will be six additions to the OBC in July, but the orchestra’s 97 musicians are yet to be reached.

“Everything we did in 19-20 we can continue to do, although there will be a small increase in the budget, not so much for programming but for the reconstruction of the orchestra”, explains conductor Robert Brufau. “It is a project that we have been developing for a long time and it will take us three or four years to go from the 74 to the 97 musicians that we should have. Six new musicians will enter in July. It is essential and is linked to the new ownership of the orchestra, so that when that person arrives, growth occurs globally. “

L’Auditori continues its defense of equity on the podium, with nine invited directors. But also with an important representation of female composers. Lili Boulanger will have her place in the OBC season, Kaija Saariaho, Andrea Tarrodi, or Betsy Jolas who is about to turn 95 will play.

In addition, the Cor de L’Auditori was finally born, whose start had been truncated by the pandemic. And it will begin with an a cappella play under the leadership of Xavier Pastrana. Another from Magrané and with The tab by Gerhard in collaboration with other choirs. And dedicating himself to the integral of Manuel Oltra and his choral music, when in 2022 his centenary is fulfilled.

As for the Mozart Nits d’Estiu Festival, in July 2022, it will feature three fundamental batons: Trevor Pinnock, Laurence Equilbey and Dani Espasa. With soloists such as the aforementioned Nicola Benedetti, the famous Patricia Petibon and the cellist Kian Soltani, interpreting Mozart, Haydn, Baguer, Gluck, Adès …

In chamber music, L’Auditori will feature the Quartet Casals and the Quatuor Hanson, among others. Jordi Savall will complete the part of the Beethoven integral that he had pending at L’Auditori, that is, the 6th and 7th (the 8th and 9th will already take place at the Liceu). And with his reading of the Requiem from Mozart. Dani Espasa and Vespres d’Arnadí will interpret the Amadigi di Gaula by Händel with the voices of Xavier Sabata and Nuria Rial.

Also Ton Koopman, axis of the historicist recovery, will be present in the framework of the Bachcelona Festival. And at the Emergents Festival, the Jove capella Reial de Catalunya and the recorder Lucie Horsch and the lute player Thomas Dunford will participate.

The Llums d’Antiga will be held in the Capella de Santa Àgata, the Basilica of Santa Maria del Pi and the Monestir de Sant Pau del Camp

And the Llums d’Antiga will be held in the Capella de Santa Àgata, the Basilica of Santa Maria del Pi and the Monestir de Sant Pau del Camp. Exaudi Vocal Ensemble and Graindelavoix will perform Gesualdo. La Grande Chapelle by Albert Recasens will be inaugurated. And Savall will explore the art of variation and improvisation from the European seventeenth century.

Finally, at the Sampler Sèries there will be, for example, a vinyl session, with memory stripping and writing by Philip Jecky and Otomo Yoshihide. And the Belgian musician / actress Liesa Van der Aa will bring her voice, violin and electronics, with a proposal very close to pop, also scenic.

And from the Escenes cycle, highlight a co-creation project that starts from the work Timber, by the North American Michael Gordon (for six persucionists) r, by michael godrodn from post-medieval America. It is diu timber Perqun eons sis great lists of whips that fan to sound in rotllana and it is a proposal of its enveloping, and the proposal is of franc quesada,