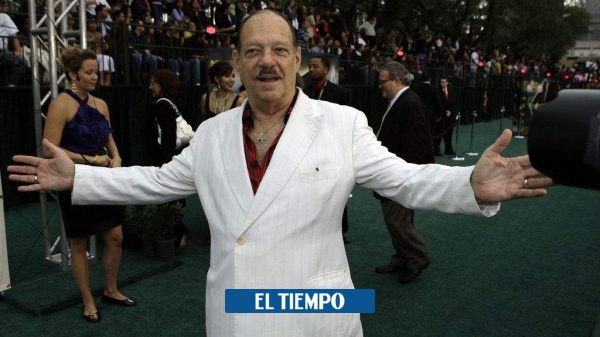 I am sensationalby Larry Harlow, voiced by Junior González.

As a result of kidney problems, after 32 days in the clinic, Larry Harlow, known in the salsa universe as ‘the wonderful Jew’, left us. Harlow was born in Brooklyn, New York, on May 20, 1939, as Lawrence Ira Khan. He grew up in the Latin Quarter of New York, where he ended up seduced by the Cuban rhythms that sounded in the neighborhood.

His family was musical. His mother, Rose, was an opera singer and his father wandered with his monumental double bass through all the nightclubs of the city with the Latin groups.

(It gives you context: We invite you to read: Salsa icon Larry Harlow died at 82)

His ear had the best teachers; When I was a child I went to the concerts of the jazz gods: Charlie Parker, Miles Davis and John Coltrane. Then he jumped to the Palladium, where he discovered the roots of Cuban music and spent hours trying to decipher the essence of that music that is based on a very strong key, almost all based on the son montuno. Harlow listened incessantly to Noro Morales, Machito, Tito Puente…, he began to compulsively buy his records and became a sophisticated collector of Cuban and Latin music.

He was definitely a precocious child, not only did he understand Tito Puente and Charlie Parker, but at the age of 13 he played various instruments and had created his own orchestra. His attraction to Cuba led him to Havana between 1957 and 1959, before the triumph of the revolution led by Fidel Castro. That fascination for the island never left him.

Larry spoke English, Spanish, German and Lucumí, the liturgical language of Santeria. His ears absorbed everything. In a remote interview he describes the genealogy of the Caribbean sound world with the precision of a historian and the passion of a composer who would go beyond the known limits of salsa: “First it was the mambo, then the boogaloo, salsa dura was born and in the eighty, it was oriented towards romantic or monga salsa, but I believe that salsa dura is the best, with excellent products and musicians, who will never be forgotten ”.

The Harlow Orchestra was the first to sign with the Fania label by Masucci and Pacheco. First he made an album with the singer Felo Brito, and then he gave way and fame to Ismael Miranda, Junior González, Frankie Rodríguez, Edwin Colón, Pablito Rosario, Tony Jiménez, Rosa Roy, Gary Carrión, Ray Pérez and wrote a unique story with Celia Cruz, which, of course, deserves a separate chapter.

Larry took on the challenge of making the salsa adaptation of the rock opera Tommy, by the legendary English group The Who. His production, entitled ‘Hommy, A Latin Opera’ He started it in 1972 and was recorded in parts with Marty Sheller. Everyone thought he was crazy. But he was not daunted.

He called his trusted singers: Cheo Feliciano, Justo Betancourt, Pete el Conde and Adalberto Santiago. And suddenly her head lit up: she needed to have as a guest singer Celia Cruz to record divine Grace. For Harlow, she was the only one who could interpret it and he looked for it in Mexico, where he lived after his departure from Cuba. He sent him a cassette with the number on it to buy time. Celia arrived in New York and did not rehearse, she simply recorded the theme of one, without cuts.

Harlow was not short on compliments: “That lady is a genius, the greatest thing ever born. Only one recording was made, without repeating anything. I’ve never seen anyone like it. Celia is unique, she is the greatest! ”.

‘Hommy, A Latin Opera’ premiered on March 29, 1973, at Carnegie Hall in New York, to frenzied success.

Because Harlow was always a forward, while New York danced boogaloo, he recovered the son montuno. In the 1980s, he incorporated complex electronic sounds and percussion into his band. He was always with Andy, his flutist brother, and supported him in the creation of his orchestra.

He also offered his support to his wife, Rita Harlow, to launch Latin Fever, the most important female group in New York, with an explosive mix of salsa, funk and black music.

Harlow’s first theme was ‘Orquesta Harlow’, sung by Felo Brito, in 1965. Hits such as ‘Con Dulzura’ came with the voice of Ismael miranda. The famous ‘Make way’, a classic by Miranda, who is currently recovering from a serious heart attack.

Another of his unforgettable songs is Señor sereno, a song that was heard in every nightclub in Cali at dawn. The portfolio, with Junior González, and with Junior himself made a topic for our country: For the whole of Colombia. Me and My Monkey was his first gold record.

Harlow was a total, ambitious and daring musician. From very early, in his shows, he incorporated the games of lights.

In 1997 he embarked on a far-reaching project: La Raza Latina, a history of Latin music, with Rubén Blades, with which it reached a Grammy nomination.
“Larry was one of the smartest and most intellectually prepared artists I ever met in New York. Possessing an acid and direct sense of humor, it was a pleasure to chat with him on any type of subject, ”Blades wrote on his Facebook account.

His presence at Fania is another of his milestones. In 1968 he was in his first concert at the Red Garter nightclub and later he was the co-producer of the legendary Cheetah concert –with 4000 people– alongside Pacheco and Masucci. In the group’s history, Harlow replaced Richie Ray at the piano and then handed the baton to Papo Lucca, who, in turn, handed it over to another legend, Eddie Palmieri.

In 1994 they lived an unforgettable moment at a concert in Puerto Rico, Larry Harlow, Papo Lucca and Eddie Palmieri shared the stage. There is a Cuban theme that each of them opens with a piano solo, which Pacheco cuts with a flute solo. It was a moment of legend.

Harlow also recovered the charanga format in the instrumentation of salsa: To record ‘The portfolio’ and ‘El paso de incarnation’, he used two trombones and two trumpets, crossed with violins. They were portentous, modern, and supremely commercial arrangements.

In 1991, when Gary Domínguez organized the first edition of the ‘Meeting of collectors and music lovers’, within the framework of the Cali Fair, Harlow was present. Then I saw him again at the last Fania All Stars presentation, at the Pascual Guerrero stadium, in 1996, where he was dressed in a double-breasted overalls, without a shirt down. I could greet him for a second and I kept his smile. That concert was organized by Hugo Molina and we share the stage all the time. His final visit to Cali was to the Jazz Festival, about ten years ago, with an experimental group.

Image of the first version of the Meeting of Collectors and Melómanos in Cali.

“At 82, Larry Harlow died,” his wife reported in a news release.
This man who recorded 106 albums and won a 2008 Latin Grammy, very little for a different musician, advanced in his thought and musical work.

He did a master’s degree in Philosophy from the School of Social Research in New York. He was ahead of his time, at Fania he only brought novelty, complicated proposals and the purest sound of the Latin invention that had the strength to compete with rock.

By Umberto Valverde
Special for THE TIME