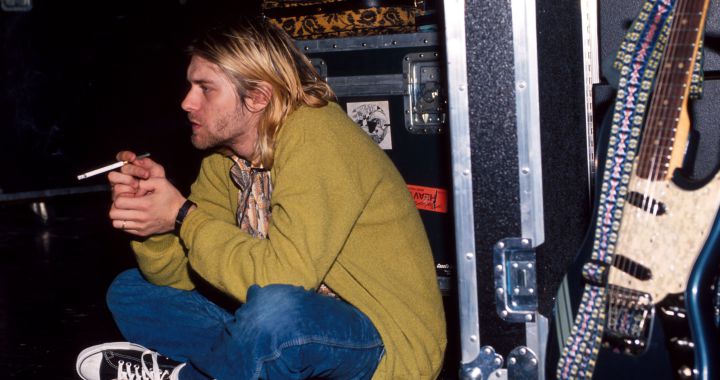 The mythomania continues to move thousands and thousands of euros throughout the world. Fans of the most famous artists and groups, in addition to consuming their music, want to get hold of the objects that their idols have touched. One of these great icons, whose value continues to revalue as the years go by after his deathit is Kurt Cobain. the leader of Nirvana He left us in 1994, and since then, his mysterious suicide and unstable life have made him an attractive character.

There is already a long list of Cobain memorabilia that have been put up for sale at auction. The jacket he wore during MTV Unplugged in New York reached 300,000 euros, and has been made available to fans up to grunge icon hair. Now, a new auction has been announced, this time for a more practical and surely more coveted object: the guitar that Cobain used in the video for Smells Like Teen Spirit.

The auction will take place May 20-22 at the Hard Rock Cafe in New York, and the object of desire will be that blue 1969 Fender Mustang that we all remember close to the American musician. According to those responsible for the auction, the guitar is expected to be sold for around 600,000 or 800,000 dollars, a very logical price considering that it was one of the most beloved instruments by the leader of Nirvana.

As the director of Julien’s Auctions, the auction house that manages it, comments, “the Fender Mustang is one of the most culturally and historically significant guitars, not only as part of the legacy of Kurt Cobain and Nirvana, but in the entire history of the rock music. Items of Kurt Cobain’s personal property are rarely put up for sale to the public. like this guitar.

The guitar has so far remained with the Cobain family, but for the past 12 years it has been loaned and displayed at the Museum of Pop Culture in Seattle, Nirvana’s hometown.

The auction will be held to coincide with Mental Health Awareness month, and part of the proceeds from this and other items belonging to the musician will be donated to a charity working to improve mental health.

A decisive role in the success of Smells Like Teen Spirit was the launch of the video. It was directed by Samuel Bayer, who would become a collaborator with David Bowie, Rolling Stones, Metallica either green Day, but at a time when he was just a fledgling filmmaker, chosen by the band because of his inexperience and because of his more punk and non-aligned image than a band produced by a multinational company. In the clip’s DNA is the 1979 feature film Into the Abyss by Jonathan Kaplan and the Rock’n’Roll High School of the ramones. This single, destined to change not only her career but also the history of music, becoming the last true generational anthem of rock.