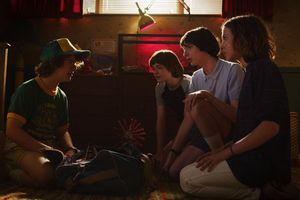 Running Up That Hill by Kate Bush has reached number one on the UK Singles Chart this June 17 after his appearance in the last season of Stranger Things.

Last week, the song was the most streamed song on the planet. and reached number one on the UK and US Spotify charts after earning 57 million streams in just one week.

As well as being number one now in the UK, it is also number one in Australia, New Zealand and Switzerland. In the United States, it is currently number four on the main chart and number one on the Billboard Global 200 chart, making it Bush’s biggest US hit 37 years after its original release.

In a new statement today, Bush said of the news: “The Duffer brothers have created four extraordinary series of stranger things andn which child actors have become young adults.

“To present Running Up That Hill In such a positive light, like a talisman for Max, the song has been brought into the emotional arena of his story. Fear, conflict and the power of love are all around him and his friends. I salute the Duffer brothers for their courage in taking this new series to a much more adult and darker place. I want to thank you so much for bringing the song into the lives of so many people.”

Running Up That Hill originally reached number three in the UK in 1985 and charted again in 2012, when it reached number 12. The song was also recently used in It’s A Sin, Russell T Davies’ award-winning television series.

The song was written and produced by Bush and appeared on his fifth studio album. Hounds Of Love, which was released in 1985, debuting at number 30 on the Billboard chart, where it currently sits at number 12.

“I am overwhelmed by the scale of affection and support that the song is receiving, and it’s all happening very fast, like it’s being driven by some kind of elemental force. I have to admit that I feel really moved by everything. Thank you so much for making the song a number one in such an unexpected way.”

Bush now boasts the longest gap between number one singles in official chart historywith 44 years between his number one on the list of 1978’s ‘Wuthering Heights’ and 2022’s ‘Running Up That Hill’.

Bush now also claims the record for the longest time it takes for a single to reach number one on the Official Singles Chart, with 37 years since the single was first released.