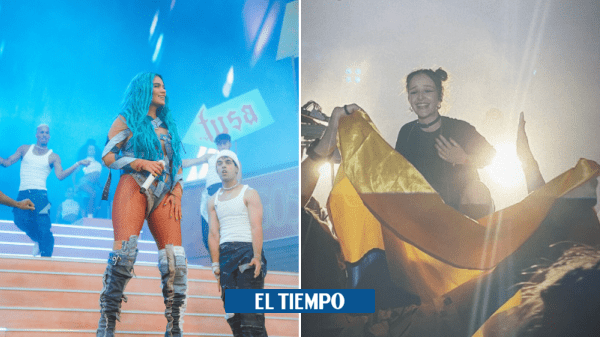 Colombian singer Karol G performed this Sunday, April 17, at Coachella 2022. Hours before, she was excited and let her see it before her followers on social networks through several photographs.

(See: The return of music festivals in Colombia)

The adrenaline of the paisa artist to be present in this new edition was evident, since Coachella is one of the most important music festivals in the world, where art and fashion also converge. The challenge was not minor: his show was on the main stage.

bom day! Still shocked as Medley ontem by Karol G honoring all the great Latin hits over the years I’ve been there to chegar no seu Tusa and finish ELA SABE QUE É A MAIOR! What a show did you give COACHELLA Latin pride Karol G a major female artist ❤️pic.twitter.com/hWS6EfuogT

“This is my first time on this stage. Up with the ‘bichotas’,” he exclaimed in his 45-minute presentation. “Dreams come true and I’m sharing with you,” she said at another time. One of the guests was Becky G, with whom she performed the song “Mami” live for the first time. Minutes before, she was on stage with Tiësto to sing ‘Don’t be shy’.

“These are the colors of my flag. I am from Colombia and I am proud to represent them and the entire Latino community,” she said before singing Selena’s iconic song ‘Como la flor’, while going through the most popular songs of Latin music in recent decades. ‘María’ by Ricky Martin, ‘La macarena’ by Los del Río, ‘Life is a carnival’ by Celia Cruz, ‘Gasolina’ by Daddy Yankee, ‘Hips don’t lie’ by Shakira, ‘Despacito’ by Luis Fonsi , ‘My People’ by J Balvin, among those sung by Karol G. “There are the Latin songs that have been number one, but they were not heard here,” he mentioned.

She closed her presentation with ‘Tusa’, one of her biggest hits in her musical career and with which she managed to be recognized in the United States and Europe.

One of the curiosities that was seen during the show is that several of the attendees arrived with aquamarine wigs, a style that she has managed in recent months.. The Colombian had told her followers to accompany her with that “look”. Social networks were flooded with photos of the event and the hashtag #Bichotella was a trend on Twitter.

The festival returned after two years of cancellation due to covid-19 and this year it takes place over two weekends, the first from April 15 to 17 and the second from April 22 to 24.

One of the most important shows on Friday was the Harry Styles, who performed for the first time at Coachella with an 18-song show and had a surprise guest, the Canadian singer Shania Twain, with whom he performed Man! I Feel Like a Woman! and You’re Still the One. Billie Eilish’s, on Saturday, was described as impressive and majestic by many.

Colombian singer and songwriter Ela Minus also represented Colombia at the festival: closed the presentations of the Sonora stage on Friday. Her show was a success and connected hundreds of people. In the middle of the presentation, she took a Colombian flag from the audience and put it around her neck.

The artist surprised the attendees, as she has done in recent months. She continues to prove that she is one of the most important artists in the country’s electronic scene. A month ago she was at the Stereo Picnic Festival.

Karol G and Ela Minus, at Coachella 2022: this was their presentations