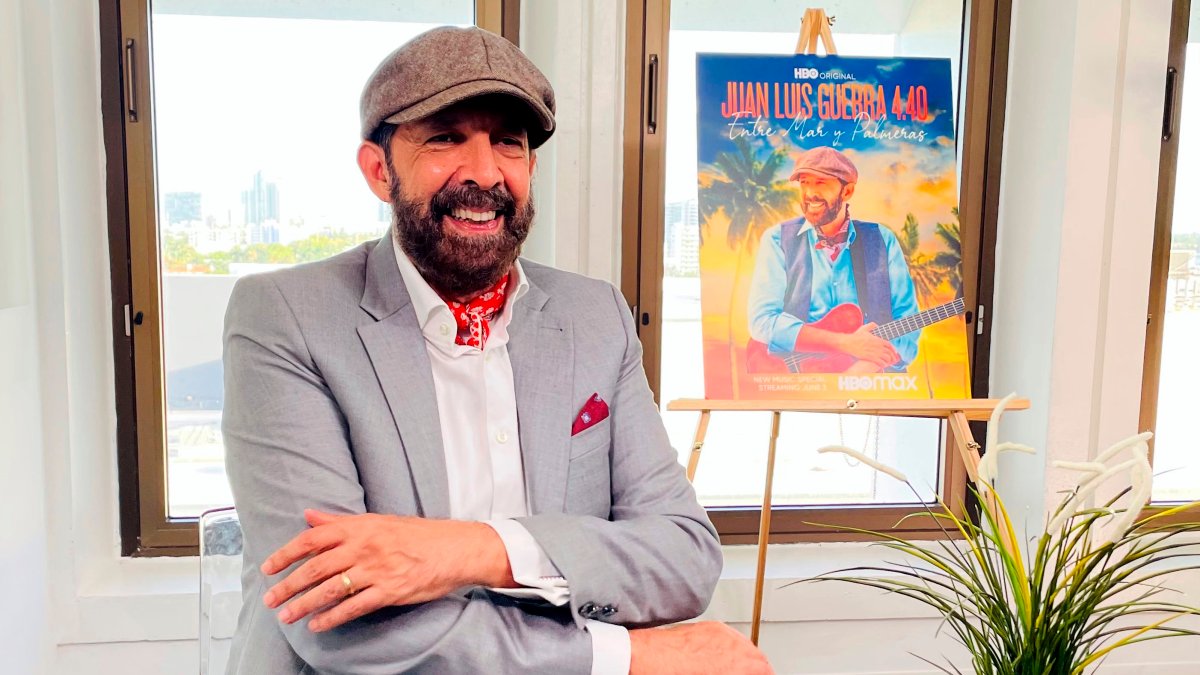 MIAMI – Dominican artist Juan Luis Guerra announced his new tour, “Entre mar y palmeras”, inspired by the documentary of the same name that debuted this Thursday on HBO, and the upcoming premiere of “Capitán Avispa”, a film inspired by his song ” The bees”.

In an intimate conversation with Efe in Miami Beach, where HBO organized a party for him to present the documentary, Guerra declared himself surprised by the inspiration that had been born in the confinement of the pandemic, which happened with his family at his home in Santo Domingo .

“It gave me time to make different arrangements of my songs as I presented in ‘Privé’,” he said in reference to an album and digital concert in which he offered reimagined interpretations of five of his most legendary songs with elements of jazz, blues, bossa nova and classical music, accompanied by piano, guitar, güira, vibraphone and saxophone, among other instruments.

He was so excited about the project, unveiled on December 25, that he decided the time had come to accept HBO’s offer to revisit his career. Accompanied by his now legendary band 4.40, he prepared a repertoire of more than 20 songs, including “Bachata rosa”, which changed his life in 1990.

The result was the concert “Entre mar y palmeras”, recorded in January at Playa Esmeralda, one of the most paradisiacal settings in the country known for its incredible Caribbean landscapes.

The repertoire, which starts with “Rosalía” and walks through “Las wasps”, “La bilirubina” and many other songs, will be taken to the public on a tour that will bear the same name and that will start “in early 2022”, he said. the artist.

In the visual preview, Guerra is seen accompanied by only 75 “indispensable” people to create the magic and capture it on video. There is a sweetness in the images that comes from having replaced the applause with the lullaby of the waves and the large enclosures for a “roof of palm leaves and stars.”

“We always play as if the public were there, especially in this case in which we knew they would see the show,” said the artist.

However, Juan Luis Guerra seems more comfortable with his feet on the sand than on stages where he has made millions of people dance. “The sea is a wonderful and transformative thing,” said the artist, who admitted that it took him a bit to make the decision to do the concert on the beach, and specifically on that one.

“I protested that I was very far away (it is a three and a half hour trip from home), that all the equipment had to be moved, that if the wind could get into the sound. I tease a lot,” he revealed with a laugh, but the result he is more than satisfied: the most appropriate word is “proud.”

The pride comes not only from his musical work, but from the visual success of “Entre mar y palmeras”, courtesy of the lens of Jean Gabriel Guerra, the artist’s male child who feels more comfortable with the camera in his hands than with the instruments. musical, and knows “to combine the rhythm of the music with the image”.

Although the youngest of the Guerra family has stood out as a filmmaker in productions of his company Guerra Films and as a cinematographer and producer of projects such as “La Gunguna” and the reality show “Flow Calle”, the music has not stopped winking at him and is usually a close collaborator of the audiovisual branch of his father’s projects.

The Spanish singer appears to be in intense physical preparation for his concert tour.

In “Entre mar y palmeras” he shows how having grown up among the notes of his famous father has given him a special sensitivity to emphasize the effect of music with his shots.

“Jean Gabriel did an extraordinary job and knew how to handle my demands. For example, I found it very important that the movement of the camera kept the rhythm of the music,” explained the singer.

The father-son partnership will also soon hit the big screen with “Captain Wasp,” an animated film inspired by the song “The Wasps.”

“I had never participated in a movie from the beginning, less in an animated project. I have had to learn even when it comes to music,” admitted the artist, who turns 64 next Monday.

The song, which was released in 2004, changed the vision of the music industry regarding religious issues, and Guerra hopes the same will happen with animated and Latin American films: “Faith is part of everything I do and where my inspiration comes from “.

“We are already very advanced, even in music. The soundtrack that I am making from scratch has some of my well-known songs and totally new themes,” he said.