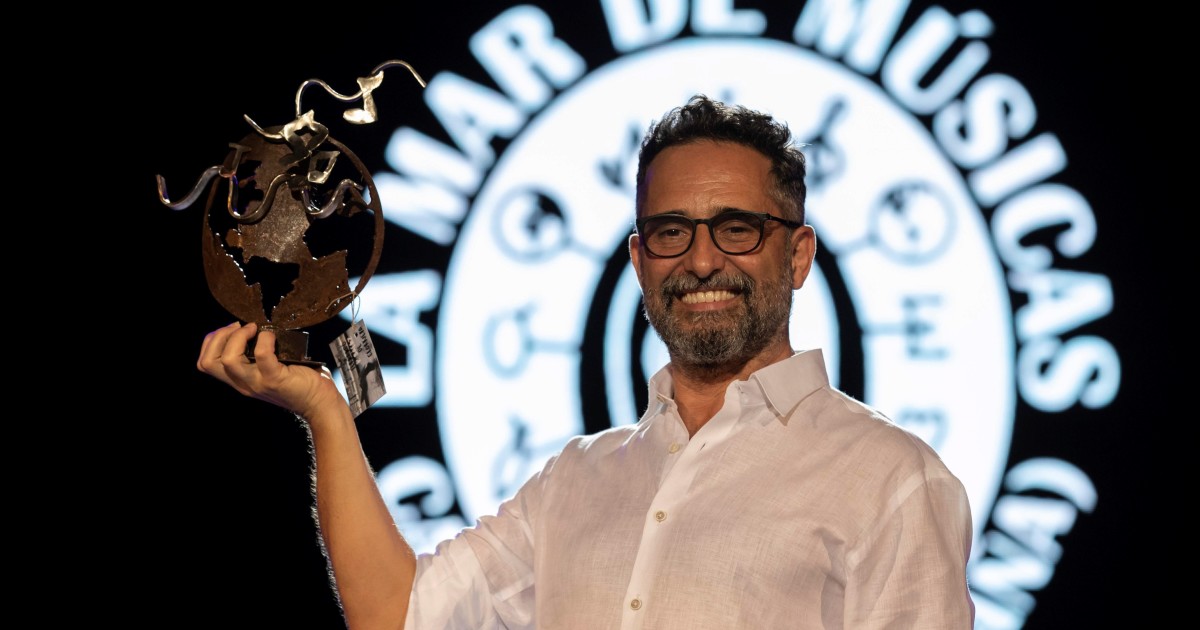 The Uruguayan composer and singer Jorge Drexler has received tonight the award of the festival La Mar de Músicas 2021 before shelling his discography in the third concert of his summer tour, after 16 months without doing so due to the pandemic.

The organization has decided that Drexler will succeed artists such as Gino Paoli, Omara Portuondo and Pablo Milanés in the list of winners for this award for being a “rebel artist with a universal pulsation, on whose transatlantic guitar they play new songs back and forth”.

The Uruguayan has also been recognized with the La Mar de Músicas award, created in 2012 to recognize relevant figures of world music, for having known how to “conjure, from the root, a full, challenging poetry, a lifeline of knowledge and memory” . “And for reminding us that living is being in constant movement”, have added those responsible for the event.

With the sculpture designed by the artist Fernando Sáenz de Elorrieta in his hands, Drexler has ironized that it was the first time he had received an award before starting a performance marked by his “desire to play again” and after 16 months without acting ” live ”in a“ very rare ”context due to the covid pandemic.

“I’m going to celebrate it in the best way, which is singing for you. It is an honor and I hope to be up to the task ”, declared the Uruguayan singer-songwriter before announcing that, due to the last-minute absence of the band’s regular pianist, they had to rethink the concert program.

“The unforeseen have something very beautiful and very special and that is that neither you nor we know what is going to happen”, has concluded his speech at the auditorium Paco Martín, who this year opens the new name in tribute to the creator of the festival, who died in August 2018.

The concert began with a nude staging, armed only with a guitar and bringing out his soul as a troubadour, improvising on the fly to summarize the last minute changes singing “Dos Colores (Black and White)”: “But you know, Gentlemen, very well how is this (of the protocol) / Our intention did not fail us ”.

The first part has continued with the pacifist “Milonga del moro judío” and the biographical “Montevideo”, belonging to “Salvavidas de ice” (2017), which has been his last studio work to date, and in which he has appeared on stage Borja Barrueta, the percursionist who has accompanied him for 16 years.

The stoic “Stardust” has preceded “Inopportune”, about unforeseen and unsought love, the ode to reflection and the passage of time from “The Age of Heaven”; “Asilo”, sung in his last duet work with the Chilean artist Mon Laferte, and the simple song of “Guitarra y vos”.

The concert continued with the beautiful and desolate “Curfew”, which he popularized as a duet with actress Leonor Watling, and “Elbow to elbow”, created and presented in September 2020, in the midst of a global pandemic, and which received a nomination for the 2020 Latin Grammy Awards in the Song of the Year category.

At the request of the audience, Drexler has played “Los bridges” – “for those brave who build bridges and the brave who cross them” -, continuing his relationship with “Soledad” and, in another show of improvisation, a duet with the cantaora Rocío Márquez, who today starred in another concert at La Mar de Músicas, singing a vidalita and “When Morente sang”.

The last part of the concert has included “Movimiento”; “Bolivia”, the artist’s tribute to the country that welcomed his father and grandparents when they had to flee from Nazi Germany; “The plot and the outcome” and “Telephony”, which has led to an encore with “Silence” and the chanted “Everything is transformed.”

The fourth day of the Cartagena festival has begun with the Burgos duo Feten Feten who, with the chotis, the tarantela, the jota and the waltz, sing the strength of their identity. María Rodés has also landed in the port city, who is coming back to La Mar de Músicas to present her latest album Lilith, considered one of the best albums of 2020, and inspired by the world of witches.

The Cartagena festival will arrive in Ecuador this Tuesday with its fifth day, which will feature the Cameroonian-born artist Yseult, winner of the Female Revelation Award in the last French Victoires de la Musique; Tanxugueiras; Rodrigo Cuevas and the long-awaited Rufus Wainwright.