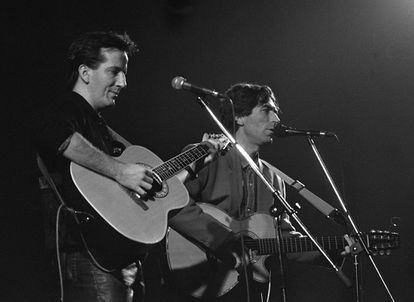 It happened a few years ago at a concert at the Gran Rex theater in Buenos Aires. Pancho Varona He approached Joaquín Sabina and told him: “This is my 1,000th concert with you.” The singer obviously did not keep count; his faithful musician, yes, and he felt the need to tell the boss. Sabina usually tells this anecdote as a photograph of the powerful relationship between the two musicians. He sometimes adorns her with humor, more or less thick, according to the inspiration of the moment. One day the joke was this: “Next year we will go to the parade of the Gay pride together. Crazy with thongs”. Joaquín and Pancho, always together. Until this week, that she has seen how a relationship of 40 years has broken. Few stories in Spanish music of such long duration. “My natural place, where I am happiest in life, is on stage, two meters behind my friend and my partner and two meters to the left. And that site, unfortunately, I have lost. I’m sad”. Pancho Varona (Madrid, 65 years old) responds to EL PAÍS from Mexico, where he is on tour with a show based on the songs of his now former boss.

While Joaquín Sabina (Úbeda, Jaén, 73 years old) doubted, last Tuesday, about his left-wing ideals at a press conference during the presentation of the documentary (which opens today Thursday) that Fernando León has filmed on his figure (“I’m not so leftist anymore,” he said), Pancho Varona released a statement informing him that his friend and partner had fired him. Panchito, as Sabina affectionately calls him, will not be at the singer’s next round of concerts, that starts in Costa Rica in February 2023 and that after several dates in Latin America, it has landed in Spain since April 20. The singer has decided to do without the buddy with whom he has composed a hundred songs and shared four dozen tours. The motives? “Honestly, I am not very clear about the reasons that have left me off the tour. Either I have not understood it well or it has not been explained to me well. I’m a bit clueless about it. I did not expect it, but it is true that I had been receiving certain types of signals for a few months. The truth is that after 40 years together I didn’t think I was going to stay on the sidelines”, says Varona.

The relationship of the two musicians began in the eighties. Varona used to attend the mandrake, that rogue place in the center of Madrid where the trio of the same name formed by Javier Krahe, Alberto Pérez and Sabina took shape. Accompanied by Gloria, his older sister, Pancho was seduced above all by Krahe’s lewdness. The first contact with his future friend was through Ducados tobacco. Sabina, who saw him there on concert days, always asked him for cigarettes from her pack. It all happened in the basement of La Mandrágora, a hole for 30 or 40 people. There, between smoke, drinks and no ventilation, they began to talk. One day, Sabina was desperate. He had a contracted concert with a band at a theater in Madrid and his guitarist led a scattered life with punctuality out of his priorities. At the umpteenth scare of the guitarist, Sabina decided to fire him. “I know all the songs,” replied a voice in the background. It was Varona, the one with the Ducats. “Well hired,” Sabina howled. That’s where it all began, in 1982. Pancho was aware of his limitations, but between the singer’s advice and his tenacity, he ended up learning. He was already the guitarist. The next step was missing. for the disk Judge and jury (1985), the lyricist handed him a sheet with the text of bull ballad. “Let’s see if you can compose something for me, Panchito.” Varona produced music that convinced Sabina.

Since then they have composed about a hundred pieces together, including classics from the Sabinero repertoire: With you, Eve sunbathing, gentlemen’s agreement, And yet, Noise either I get off at Atocha. Sabina in the lyrics and Varona in the music, some shared with fellow guitarist Antonio García De Diego, Sabina’s other great squire (with a few years less relationship with the boss than Varona). “The greatest pleasure in the world is to have a song fresh out of the oven, for Panchito and Antoñito to come [García De Diego], sit down and sing it to him. I make a letter, a skeleton of music, that sometimes they throw it away and build something else; or I do nothing, but I tell them what I would like. We work as a team much more than the Beatles,” Sabina explained in the documentary of the recording. mourning relief.

These days within the singer’s environment the law of silence prevails. This newspaper has contacted their representatives, but they have not wanted to make statements. Some of his collaborators and musicians have excused themselves: “Sorry, we have nothing to say.” In the environment, the breakup a year ago of Noche Sabinera, the group of musicians from the author of Princess who has been performing throughout Spain since 2006 “to fill the gaps in which Joaquín rests”. Antonio García De Diego and Pancho Varona were the most popular faces of a band that also includes Mara Barros, Paco Beneyto and Jaime Asúa. In September 2021, Varona announced: “The rest of the components that make up Noche Sabinera have decided to take another course with a new project in which I no longer have a place.” All but Varona were renamed Blessed Damned. Sources close to this group tell this newspaper that “the band broke up because there was a brutal conflict of interest.” Pancho Varona’s concert schedule with other projects made it unfeasible to organize the Noche Sabinera recitals, they say. “You cannot leave four colleagues at home for your own agenda,” they point out. And they insist that Noche Sabinera does not separate, but disappears and Benditos Malditos is born. Varona has her own version of him: “Yes, I have other projects and the time was divided in the middle of the month with Noche Sabinera and the other for my projects. What happens is that my half worked a lot and Noche Sabinera his half worked very little. And that annoyed them.”

For a year, Varona has been developing her tour Pact between gentlemen. 500 nights. And Benditos Malditos is theirs (they perform in Madrid on Friday). The two explode Sabina’s songbook. Two luxury tribute bands made up of musicians from the honoree. Sabina, as those close to him recognize, is a guy who avoids confrontation. Some sources suggest that the singer has made the drastic decision to do without Varona given the prospect of living together on the next tour (Against all odds) with a band where one member doesn’t talk to the rest. Many days of living together, many hours of work, a lot of tension. A lot of everything to start with friction. Varona responds: “According to Joaquín, that’s not why. He did not tell me that this could influence the decision. In all houses and in all families there are disagreements that end up being fixed over time”. The guitarist does not want to reveal the conversations with Sabina “out of respect.” They haven’t seen each other for many months. “The last time we spoke was a year and a half ago. I was at his house for some matters other than strictly musical matters. The conversation was excellent as it always had been.

After the accident that Sabina suffered at the WiZink Center in February 2020 and which forced him to cancel the tour, the Andalusian has only made two performances, which are considered to have taken a position in this conflict: one in February 2022 with Leiva at the Goya awards ceremony and the other in April of that same year in a concert in Madrid of Blessed Damned (no longer Varona).

The singer had already marked the way. For a long time he has moved with the crutch that Leiva gives him (and with that of the writer Benjamín Prado). They met in the days of Pereza (“los perecita” he called Rubén Pozo and Leiva, with that fondness of his for diminutives) and the presence of the rocker is increasingly crucial, and proportional to the distance on the artistic level with Varona. In the latest album by the Jaen artist, I deny everything (2017), Leiva plays Varona and De Diego, and they barely participate. Leiva is also the composer of the music for Feeling it a lot, the main song of the Aranoa documentary. Leiva is also the one in charge of the next work by the author of Let’s say I’m talking about Madrid, that he wants to publish in 2023. And again Leiva is the number one candidate to play the role of Sabina in a series that is being prepared about the singer’s English stage, when he left for London in the seventies before devoting himself professionally to music . Sabina wants Leiva to interpret for her, but the musician resists. It does not seem, however, that the former member of Pereza is going to be on the tour of Against all odds. The one who will make his debut with the singer is the guitarist Borja Montenegro, who has played with José Luis Perales, Víctor and Ana or Luz Casal. They will also almost certainly be Jaime Asúa, Antonio García de Diego and Mara Barros, the three from Benditos Malditos.

During all these years, Varona has been the spokesperson for her boss, in increasingly radical withdrawal from the media. Since he is not available, the guitarist, solicitous, narrated everything he had learned by his side, spoke for him and told the story of the songs. Sabina never objected. These days Varona is recovering in Mexico and is already thinking about the future: “I still have not finished assimilating or understanding the fact that she will not be present. They are many years together, many scenarios and many songs. But on the other hand I am working more than ever, and the phone does not stop ringing with a view to the next season”.

Joaquín Sabina and Pancho Varona: story of a 40-year relationship with a harsh ending