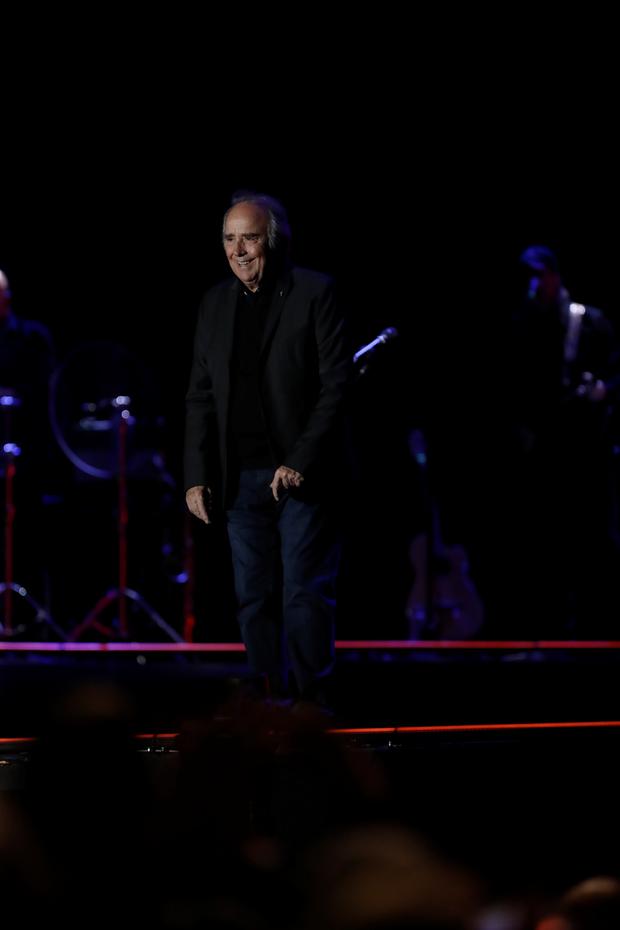 Piano, violin, drums, double bass, saxophone. It’s 9:15 p.m., and the musicians are ready on stage, an open curtain lets the singer-songwriter pass. The people receive him standing up and Joan Manuel Serrat open your arms His first words are sung: “Dale que dale”, a theme composed from the verses of Miguel Hernández, is the theme with which the most famous Catalan receives his public gathered at the Plaza Arena: Hit the blade, mill, until the wheat snows/ Hit the stone, water, until it becomes tame.

Serrat wears a proper gray jacket, black shirt and jeans. Her first words for the audience have a gender focus and the honesty of someone who has come a long way: “Ladies, gentlemen and impartial in the matter… I come to say goodbye with joy, I have no other choice. So many years doing something that I loved to do, sharing it with many people who have shared it with me. I have no other than joy.

Indeed, easygoing and funny, as usually happens in his concerts, Serrat flirts with stand up comedy, joking about his own death: “I don’t know what they may have told you, but I make it clear that this is not going to be my last concert, I want to say that today it will not be. Wait. I hope I haven’t come this far for such an unpleasant situation. If we didn’t make it to the end, you can always brag about it: “I was there when it crashed.”

Serrat plays with humor to get away from any hint that borders on melancholy or nostalgia. “I know it’s difficult, but think that, from now on, we only have the future,” he said, before interpreting “My childhood”, which he ties with “El carousel del furo”, a song dedicated to his grandfather, while, in the background of the scene, the circular route of the horses of a carousel is projected on the screen. It is the territory of childhood to which the Catalan musician transports us.

And yet, the composer will later confess the artifice behind the songs. He reveals that, unlike what was sung a few moments ago, his grandfather was not a fair worker, but a prudent secretary of the town hall. “But the characters are dreams”, says Serrat, who throughout the concert will share a few certainties of his personal poetics. The same will happen with “Romance de Curro ‘el palmo’”, an interpretation that, shared so many times, continues to move him. “These characters never coincided, but I put them together in a fantasy story,” he warns. “Fantasy revolves around the characters in the songs. And I suppose you will agree with me if I tell you that we would all be much sadder and poorer, if it weren’t for those wonderful creatures and lies that fiction gives us”, emphasizes the musician.

Then there will be classics like “Señora” or “Lucía”. Serrat takes up the guitar to accompany himself on songs like “Today for you, tomorrow for me”, composed with Joaquín Sabina and “I don’t do anything else but think about you”, one of his funniest songs, focused on the failed search for inspiration when composing. “What is a song?” asks the Catalan. The audience laughs when the singer cites the definition offered by Alexa’s artificial intelligence, responding solemnly with the definition of the Royal Spanish Academy. “What aseptic coldness that of the academics. A song is lyrics and music, but it is music that speaks and lyrics that sings, ”he defines.

Serrat will express his gratitude to musicians, poets and authors “who gave us songs to drink that made our throats shrink”. And of course, he does the same with the performers who have accompanied him for a good part of his life, such as Ricard Miralles and Josep Mas, who flank him on stage. The rest of his band is brilliant: David Palau on guitar, Úrsula Amargós on violin and backing vocals, Vicente Climent on drums. And on sax and flute, an immense José Miguel Pérez Sagaste, also a pillar of the wind section in Sabina’s concerts.

The concert then proceeds with the songs “Something personal”, “Las nanas de la cebolla” (based on another poem by Miguel Hernández, set to music by the late Alberto Cortez) and “Para la libertad”, a true anthem of anarchy, which updates his sense when the lucid graffiti of the British Banksy is projected on stage. Then Serrat will sing in Catalan “Cançó de bressol” (lullaby), in which he remembers his mother and his childhood in Poble-sec (Dry Town), a neighborhood in Barcelona on the slopes of Montjuïc, facing the sea Mediterranean. We also listen to essential early songs such as “De papier-mâché” or “Your name tastes like grass”, updated with mariachi arrangements, “Chance is capricious” and “Today can be a great day”, an affirmation of the artist’s vitality 78 years old.

In a corner of the concert, Serrat addresses the issue of global warming, a theme developed in his songs long before environmental concerns were part of the rhetoric of the media. “It is urgent to make tough decisions. But those who have to take them seem to be in no hurry, ”he denounces. And his warning is complemented by songs as profound as “Pare” (Father), sung in Catalan (Father, tell me what they have done to the river that no longer sings / It slides like a dead catfish under a span of white foam / Father, the river it is no longer the river), and then the fundamental “Mediterranean”.

They will then follow “Aquelas pequeños cosas”, in which Serrat opens the microphone to the public, who also interprets “Caminante no hay camino”, a famous commentary on Antonio Machado’s poem. Already on the verge of closing, the musician says goodbye but no one in the public allows it. “Everything that begins ends, that’s what I came to tell you”, warns the Catalan singer-songwriter, giving away three icons from his repertoire: “Esos locos bajitos”, “Pénélope” and, before the lights went out, “Fiesta”, a song to the traditional festival for San Juan’s day, replicating the fireworks on the screen, a tribute to Picasso, to the human towers formed by the strong Castellers, the parade of giants, the bonfires, the torches, the firecrackers. A Catalan celebration that puts an end to exactly two hours of concert. The singer-songwriter calls his musicians to share the applause he receives. The farewell of the entire cast assumes a theatrical manner. Serrat thanks him and we thank him.

His is the expression of the troubadour, that of a carnivalesque character who sings truths that many would not otherwise like to hear. Serrat is a core part of the culture, a voice that we need. The singer-songwriter label is almost insulting: it is not enough to define a deeply literary poet. Serrat came to say goodbye, but we have his word, or as he says, the word he sings.