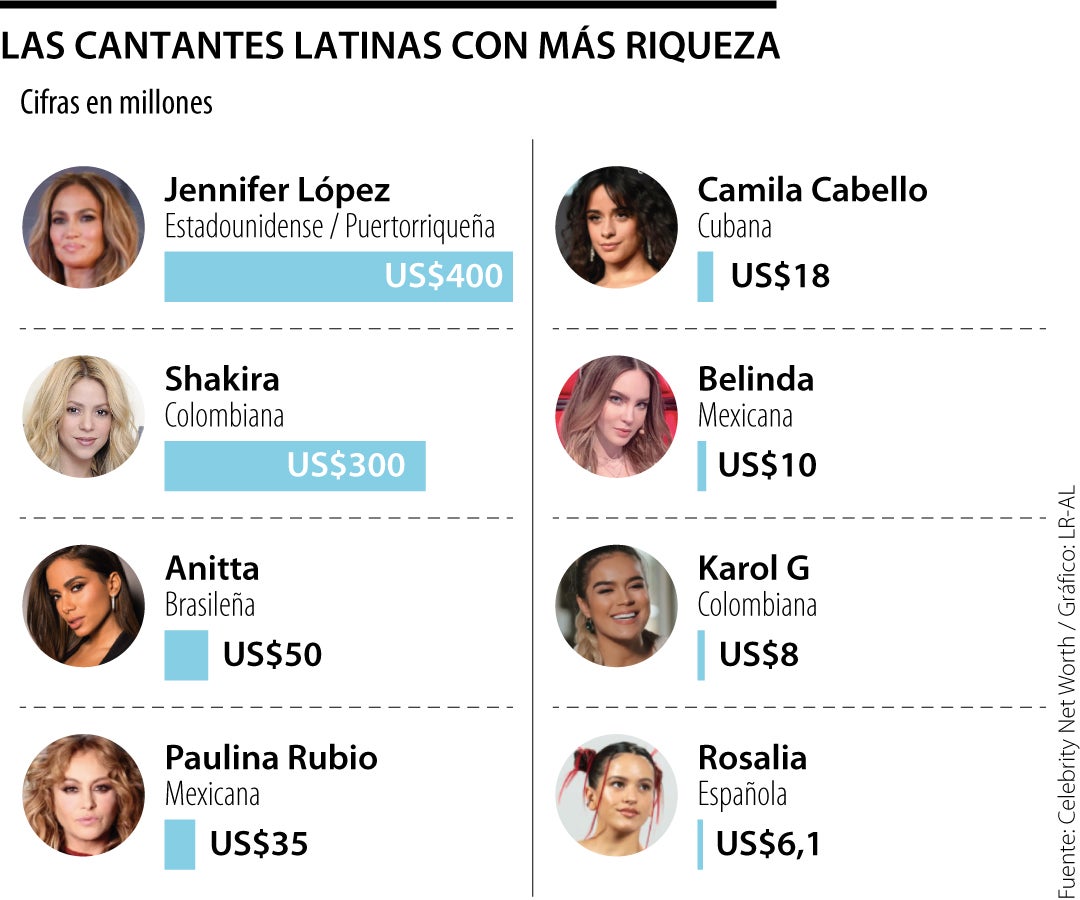 Since women began to open up more space in sectors that were traditionally dominated by men, they also began to occupy the power rankings.

One of them is that of the Latin singers who concentrate the most wealth in light of their accumulated net worth, according to data from Celebrity Net Worth. And it is that Latin music has also been another one that has co-opted scenarios that cross the regional border.

First on the list is American and Puerto Rican actress, singer, dancer, fashion designer, television producer, and businesswoman, Jennifer Lopez, with a cumulative net worth of $400 million.

This figure is the result of her musical career that has spanned more than 25 years and today she is one of the biggest celebrities on the Hollywood list. Due to the above, the singer has a salary close to US$40 million per year, approximately.

Second is Colombian Shakira, who has a net worth of US$300 million, according to Celebrity Net Worth. Shakira, who is a singer, songwriter, producer, dancer and philanthropist, has sold more than 125 million albums and singles worldwide, making her one of the most successful female singers of all time and hence her numbers. billing.

As the third richest singer is the Brazilian artist Annita, of hits like “Não Para”. The singer, songwriter, actress, and dancer has a net worth of $50 million. She has had several number one singles in Brazil, including “Show das Poderosas” and “Deixa Ele Sofrer”. Anitta rose to fame after releasing her debut single “Show das Poderosas” in 2013. The success of the song landed her a major contract with Warner Music Brasil.

In fourth position is Pulina Rubio, with US$35 million, who has been nominated for several Latin Grammy Awards and has sold more than 20 million records worldwide.

Cuban Camila Cabello closes the top five, with US$18 million net worth. She is followed in sixth place by Belinda, with US$10 million; and, seventh, the local Karol G, with US$8 million of accumulated net worth. And Spain’s Rosalía ranked eighth among the wealthiest Latin artists, with $6.1 million.

Jennifer Lopez and Shakira, the Latin singers with the most net worth