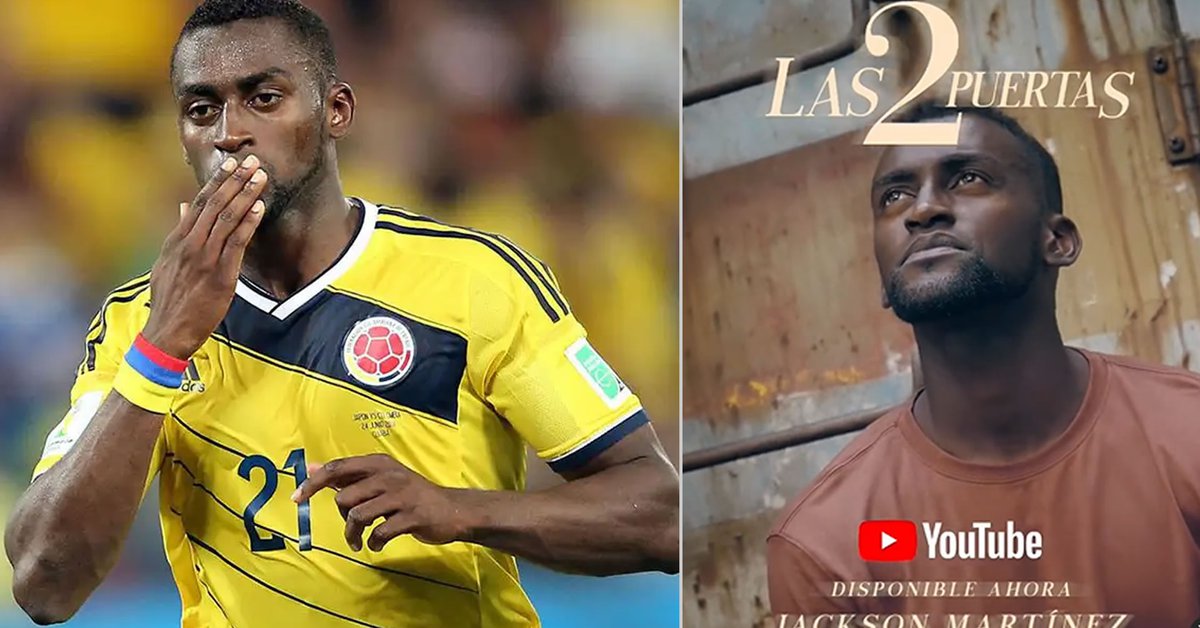 “The 2 doors” It is called the recent single that was released by the former player and striker of the Colombian National Team, Jackson Martínez, song that is part of his album ‘I will not fear’ and that was written by him, and is based on the biblical quote from Matthew 7: 13-14, where the reality of the human being is reflected that in his freedom to be able to choose the directions of his life always goes to the easiest or broadest without reviewing the consequences of doing this.

According to a statement, the song speaks of the wide door that is the easy one and the narrow door that is the one that leads to salvation provided by God. Both his album and the song were developed at Palma Production and were directed and produced by Mr Dec, a member of the group Golpe a Golpe, Guajiro Producer and Hugo 30.

The lyrics are authored by Jackson Martínez who creates his songs for the glory of God through the Bible, from the experiences he has had in his spiritual life and his personal life experiences.

As revealed behind the scenes of this production, the location was in Bello, Antioquia, in the old railway workshop, during the artist’s most recent visit to Colombia since he is based in Portugal. The location to shoot this video was the Parque Artes y Oficios and it was under the direction of the Colombian Cleyder Duque who has directed the last two videos of the paisa group Golpe a Golpe.

In this one, Jackson Martínez is seen in a quiet space accompanied by his musicians and reflecting on how easy but harmful it can be to take the short and wide path, avoiding the narrow one, avoiding the lessons that difficulties give.

After ending his football career and starting that of a singer, Martínez in an interview with the entertainment program La Red, from Portugal announced since last February 28 that he was working and strengthening his ability to rap and make uplifting music . Initially, his theme “Un Salvador” was known.

It should be noted that his album also highlights topics such as: ‘I will bless your name’, ‘Listen’ and ‘Decisions’.

When asking about a possible concert, the now rapper said that She has not yet planned something like this, as she is awaiting the birth of her child and still has pending business issues, so she believes that it takes time to do so.

The Colombian striker, had his beginnings in Independiente Medellín, going through Mexican soccer and reaching Portuguese soccer where he had his maximum splendor with Porto, he was always admired for his strength and good definition in the small area.

Nevertheless, His problems began in a knockout match with the Colombian National Team, where he had a strong blow to his left ankle, something that made his participation in his club at that time, Atlético Madrid, enormously difficult. Due to this, his level began to decline and in a short time he was transferred to Chinese football (Guangzhou Evergrande), having good moments, but never again had the same recognition.

Later he returned to Portuguese football, more precisely to Portimonense, but the constant relapses of his already chronic ankle injury, led him to make the decision to retire from football activity, on December 7, 2020. Currently, he is dedicated to his family and creating religious music.

Colombia lost a position in the FIFA ranking, after the triple knockout date
Tolima vs. Equidad and Pereira vs Pasto: the second key of semifinalists of the Colombia Cup is defined