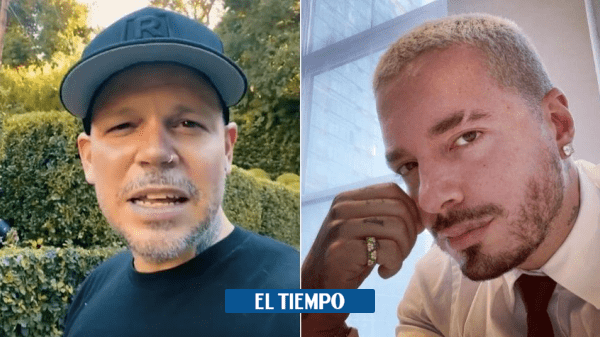 After several months of his controversy with Resident, J Balvin He referred to what happened in the discussion for the Latin Grammy nominations.

In an interview for the YouTube channel ‘Tell me king‘, Balvin affirmed that he felt alone in the middle of the controversy generated and assured that the episode hurt him, since he considered Resident as a friend.

This was what he said.

‘The Grammys don’t value us’: the controversy

The episode dates back to September, after the nominations for the Latin Grammy last November.

On that occasion, Balvin was dispatched against the awards for not recognizing the reggaeton. The artist even called for a boycott of the ceremony.

“The Grammys don’t value us, but they need us. It is my opinion and nothing against the other genres because they deserve all the respect. But the trick is already boring. We give them ratings, but they don’t give us respect (Pd. I’m nominated so they don’t come because I’m hurt), ”he wrote on that occasion.

“Those who have power in the genre, none should go. That is, all of us because we are a movement,” he added.

(You may be interested in: Controversy because J Balvin received the ‘Afro-Latino’ award)

Resident responds to J Balvin: ‘your music is like a hot dog cart’The artist responded to the Colombian’s comments about the Grammy Awards.

After the declaration, the Puerto Rican Resident He responded to Balvin by comparing his music to a hot dog cart and criticizing his call for a boycott on a night that would be dedicated to Rubén Blades.

“You have to understand José, it is as if a cart of ‘hot dogs’ gets upset and falls into … because you cannot earn a Michelin star (…) Let me explain to you, so that you understand, your music is as if it were a cart of ‘hot dogs’, which many people may like, but when those people want to eat well, they go to a restaurant, and that restaurant is the one that it earns Michelin stars, “he said in a video on his social networks.

‘I felt very lonely. That’s when I learned ‘

Although after a while the discussion was forgotten, the artist spoke in his recent interview and recounted how he experienced the controversy.

Balvin stated that he understood that he made a mistake by calling others to act and by not taking the initiative to speak with the Academy about what was happening with the urban genre at the awards.

“The biggest mistake I had when the Grammys happened was to summon people, instead of speaking directly with the Academy and with the artists and say: ‘this is happening’. It is one thing to call for power and another is to use it. I called him ”, he affirmed.

The Colombian assured that he understood that although others could agree, they would not make a boycott just because he requested it.

He also added that on that occasion felt lonely and he understood who he could count on.

Everyone has a clear conscience. I know what i said

“I felt very lonely. That’s when I learned (…). Obviously many people did not want to get involved, suddenly because they were afraid that someone would answer something, that they would get into a war. I get it, it wasn’t his situation either. There I realized who I am counting on“, He said.

On his discussion with ResidentThe artist said that it hurt him because he considered René as a friend, but he affirmed that he has a clear conscience about what he said and did at that time.

“I considered him a friend, my friend. That’s why it hurt (…). There are many things that people do not know and I am not going to tell them. Everyone has a clear conscience. I know what I said. Why didn’t I come out to talk? To foolish words, deaf ears ”.

(Read also: J Balvin: controversy over some answers he gives to his followers)

However, Balvin affirmed that he did not miss the opportunity to make merchandise with the controversy: “I am a paisa, I am from Medellín, and if lemons fall on me, I will make lemonade, and we will sell everything.”

He also left the door open for a possible reconciliation with Residente: “No friends, but if you talk and make things clear, no problem“, Hill.

The controversial video of Perra

In the interview with ‘Dímelo King’, the artist of the urban genre also referred to the controversy over the Bitch song video and affirmed that although some people warned him what could happen, his intention was to support Tokischa’s career.

“They did tell me. My wife told me, my best friend told me, but I was supporting Tokischa, an empowered woman who speaks as men express themselves. I paid a high price, but good, “he said about it.

(What’s more: J Balvin apologizes for the video of his song ‘Perra’)

The man claimed that he offered heartfelt apologies and that he accepted that the video contained expressions of disrespect.

“I made my statement officially apologizing and what else can I do. I downloaded the video. I already asked for forgiveness from the heart, knowing that I am not what they were calling me. But in the video you could see a cultural disrespect and I had to accept it, ”the Colombian closed.

This was the interview granted by the singer.

Dulce María, from ‘Rebelde’, talks about what she won with the telenovela

Photos: woman denounces that she got a chicken head when ordering wings

J Balvin talks about controversy with Resident: ‘I considered him my friend’