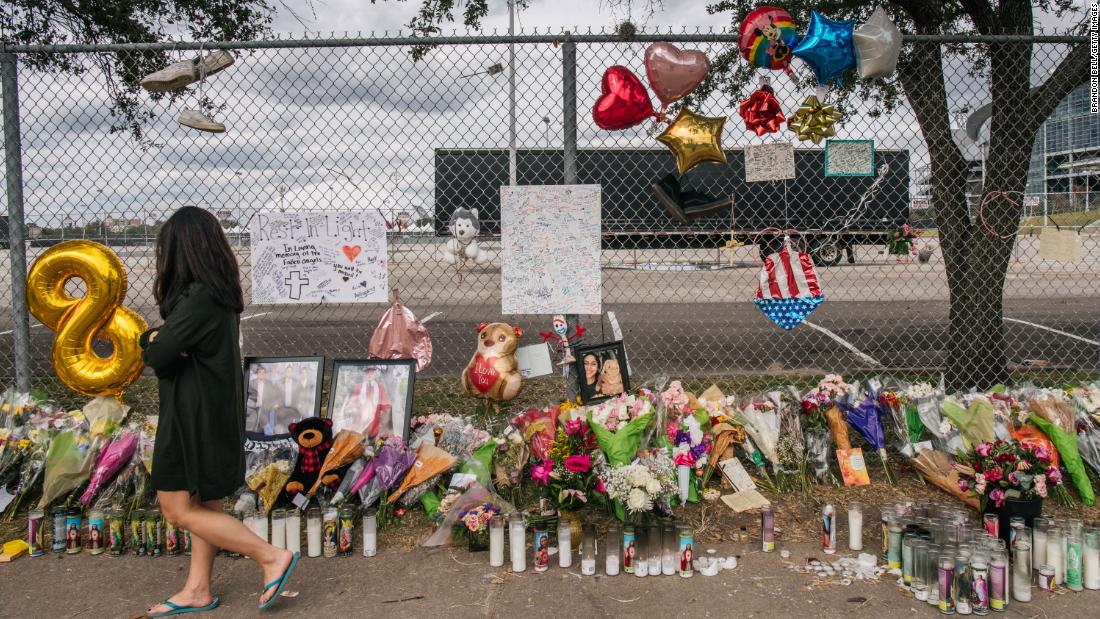 (CNN) — As more details emerge about the communication difficulties of attendees and employees at the Astroworld Festival in Houston, survivors of the crushing crowd on Friday night describe the horror of a “whirlwind” of people moving toward it. stage during the performance of musician Travis Scott.

Bryan Espinoza, 16, spoke at a press conference this Tuesday with other people caught in the crushing of the crowd, saying that “everyone’s life was at stake” as the pressure mounted during the show. Espinoza said he was immobilized against a metal barrier.

“At one point, my ribs dug into the railing, basically impaled, and I feared for my life that I wasn’t going to get it,” Espinoza said. A security guard helped him jump over the fence, saying there were already “hundreds of bodies on the ground of people passed out, falling over the railing.”

Eligio Garcia, 18, described how he and his girlfriend got caught in a “whirlpool” of people at the beginning of Scott’s presentation.

He survived the chaos at Astroworld, but lost his brother in the stampede 3:27

“Just kids and people falling and people trying to reach them,” he said. “I really heard people yelling ‘Help, please help me.’

Garcia said he and his girlfriend were knocked down and others fell on top of them. In the end, they were able to stand up from the crowd, and he said that the audience’s cries for help to the staff or those responsible for the show at the end of each song went unanswered before another began.

“It’s quite a nightmare that keeps playing in my head every night,” he said.

At least 18 lawsuits have been filed in the Harris County District Court, Texas, related to the Astroworld tragedy that unfolded among a crowd of 50,000. Eight concert goers died in the crush, and three people who were injured remain in the hospital, Houston Fire Chief Samuel Peña told CNN.

Ayden Cruz, who was with her friend Brianna Rodríguez – one of the eight people who died – told CNN’s Anderson Cooper that they were both around a “circle of people who had fallen behind us” and were the next in trip on.

“The domino effect of the crowd going back and forth, pushed us onto our backs, and while that was happening, people started to fall on top of us and made it harder to take a breath and just a lot of weight on us,” said Cruz, adding that another friend of his “also fell on his back and the people on top of us. It was really scary.”

Communication problems at the concert

As officials work to get a full understanding of what went on in the crowd during Scott’s set, they are “looking at everything from the beginning,” Houston Mayor Sylvester Turner told CNN’s Don Lemon on Tuesday.

“We are examining the roles that each one played, what missteps, failures, loopholes that may have existed,” Turner said, adding that they are not ruling anything out.

The mayor said they are also investigating complaints from fire officials that there were communication failures as the deadly tide of people unfolded.

Peña told CNN on Tuesday that firefighters stationed outside the Astroworld compound were not in radio communication with the emergency medical service providers hired by the concert organizers.

According to the president of the city’s fire brigade union, Houston fire officials near the venue had asked the concert organizers for a radio to communicate with the emergency medical services company, but only provided them with phone numbers. mobile phone.

Concert goers have since stated that they were unable to text or call due to poor mobile phone service.

Upon learning of the crush, firefighters dispatched their resources to the crowd, saying 12 “highly critical” victims were eventually moved, many with CPR in progress. Turner said Live Nation has released some video footage of the event to Houston police and they hope to get more as the criminal investigation progresses.

Harris County Judge Lina Hidalgo is considering using an outside law firm or third party for an independent investigation into the tragedy, according to her spokeswoman.

Paying tribute to the deceased at Astroworld

Family and friends of the eight concert-goers who died are paying tribute at a vigil at NRG Park, the site of the festival.

Caitlin Barrera told CNN Tuesday that she was a neighbor and former partner of Madison Dubiski, a 23-year-old aide who died. “She was a very sweet girl and what happened to her is very sad,” Barrera said. “This is the last thing you would think would happen.”

Rusty Barber, who did not know the victims but wanted to pay his respects, shared with CNN his frustration with how Friday’s concert turned into a tragedy and Scott’s set continued through the surge.

Scott maintains he had no idea the extent of what was happening in the crowd during Friday’s show. Footage from the live broadcast of the concert also showed Scott pausing his performance and watching in apparent confusion as an ambulance pulled into the crowd before the end of the concert.