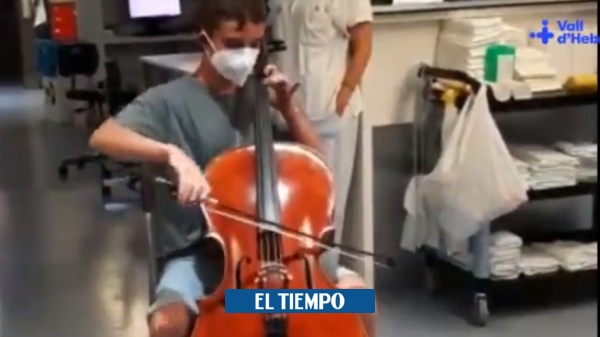 Amid the excitement that vaccination in Colombia advances for people between 30 and 34 years old, a hopeful story comes from the region of Catalonia, in Spain.

Pau, a 13-year-old boy, was able to visit his father after two months without seeing him because he is hospitalized in an Intensive Care Unit for a serious respiratory condition derived from covid-19.

The most striking thing about the reunion is that the teenager took with him a cello with which he gave him an inspiring concert to his dad.

(Read also: ‘There was a day that I did not love you’, Eva Rey to her daughter about the idea of ​​abortion).

The video, which was shared by the hospital where the man is admitted, has awakened a wave of humanity on social networks.

Before restricting visits to patients, the ICU #VallHebron hosted a live cello concert. Pau, a 13-year-old boy, played for his father, who was admitted with #covid serious, and who had not seen for two months, Bach pieces and soundtracks.
🎻Look at how it sounds pic.twitter.com/GAO8va7Dtm

(You may be interested in: Survived the fierce attacks of a bear for a week).

According to the medical center, a week after the concert, the man is already more stable.

Although it is difficult to establish clinically the relationship between his improvement and the child’s visit, it is very difficult not to think that the concert was beneficial for the patient.

That same feeling seems to be that of the child’s mother, who considers that “the visit of her son encouraged Pep (the father), who saw that he had a future”, as recorded by the Catalan newspaper ‘La Vanguardia’.

After his son’s concert, his condition began to improve and they were able to disconnect him from the respiratorhttps://t.co/G8QrwUbUIG

It has been known about little Pau that he is in his first year of music at the Barcelona Conservatory.

Due to what happened with his father, it seems that the novel ‘cellist’ has already discovered the inexplicable power healedr of music.

You will never forget it.