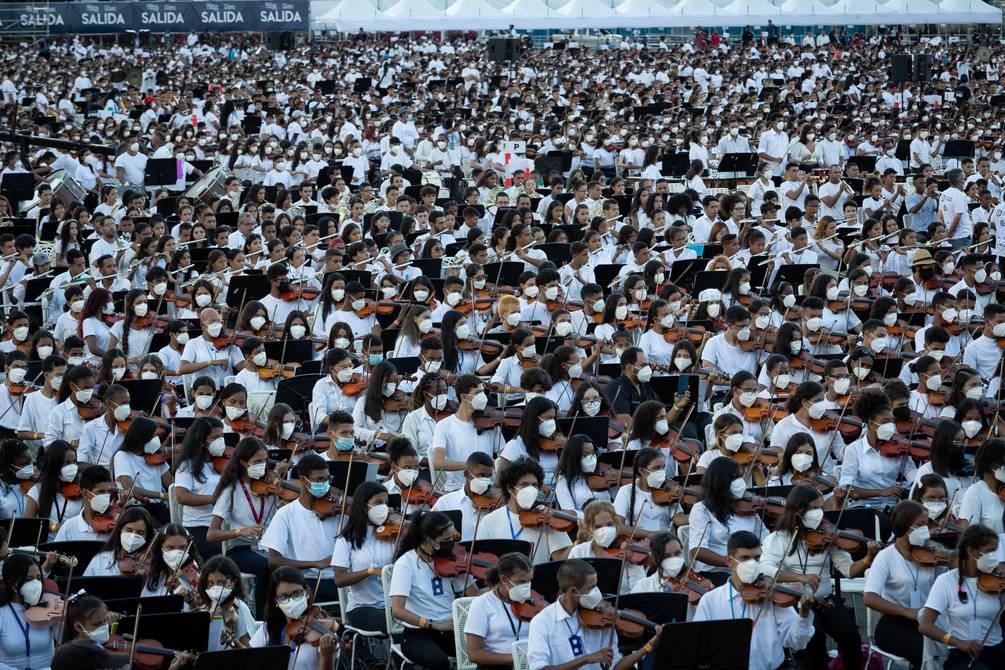 The current record was set in 2019 in Saint Petersburg, Russia, by an orchestra of 8,097 musicians.

Some 12,000 Venezuelan musicians performed this Saturday Tchaikovsky’s Slavic March in an attempt to impose a new Guinness record on “the largest orchestra in the world”, the outcome of which will be known in the coming days.

In the courtyard of the Military Academy of Venezuela, in Caracas, musicians from all over the country gathered, members of the System of Children and Youth Orchestras of Venezuela, a state program founded in 1975 by the late maestro José Antonio Abreu that has given access to musical education to thousands of children of popular classes.

“El Sistema”, as it is known and which has been replicated by dozens of countries, is the cradle of emblems such as Gustavo Dudamel, the musical director of the Paris Opera and the Los Angeles Philharmonic.

Pyotr Ilyich Tchaikovsky’s work, composed in 1876 as a hymn to inspire Russian and Serbian soldiers in the war with Turkey, was third in the eight-piece program at this concert.

Andrés David Ascanio, 34, was in charge of directing the piece.

“If a rope breaks, don’t stop. If you lose the score, keep on by heart, but don’t stop ”, asked the teacher before the end of the rehearsal so as not to put the record at risk.

With the Simón Bolívar Symphony Orchestra, the most important in the country, at his feet and as a base, Ascanio raised the baton and the music began to play.

During the 12 minutes that the piece lasted, some 260 auditors from the KPMG firm observed that each musician complied with the rules to impose the record, such as that instruments are not shared and that everyone plays for at least five minutes.

Guinness will announce in the next 10 days if Venezuela ultimately has the largest orchestra in the world.

The current record was set in 2019 in Saint Petersburg, Russia, by an orchestra of 8,097 musicians.

“El Sistema” had already brought together more than 10,000 musicians to pay tribute to maestro Abreu when he passed away. On that occasion it was impossible to certify the record for the times and documentation required by Guinness.

The music played loudly as night fell on a clear afternoon in Caracas, with the El Ávila mountain in the background and some macaws flying over the stage.

The young musicians, in white t-shirts, played concentrated, following Ascanio’s guidance through a screen that allowed them to see him from a long distance.

“It is the first time in my life that I live that experience of seeing the director on a screen; however, it was nothing to write home about, we adapted quite well, ”Ernesto Laguna, a 21-year-old violinist, who traveled from Coro (Falcón, west), told AFP to join the gigantic orchestra.

“It was quite a challenge, there were many of us, the question (was) of timing, but it was achieved,” he added.

The percussion rushed in and the cymbals rumbled in the restless and dynamic central section of this work, which mixes Slavic folkloric materials and nationalist elements.

Although it has great technical, artistic and musical difficulty, it is part of the regular repertoire of “El Sistema”.

“At first I was scared because it’s a bit complicated piece but it turned out well for me,” said 16-year-old Enderlis Rincones, relieved, who plays the bassoon and traveled from Villa de Cura (Aragua, center).

At the end of the Slavic March the young people celebrated with an avalanche of sounds with their instruments, which they then raised with emotion. Among the musicians was Nicolás Maduro Guerra, deputy, flutist and son of the Venezuelan president, who did not attend.

Ascanio, along with the other directors of the program, shouted “Venezuela” … to which the musicians responded: “the largest orchestra in the world!”

The audience was mainly limited to authorities, including Vice President Delcy Rodríguez; military and diplomatic corps. The applause, in fact, was almost imperceptible after each piece.

“I know that millions applauded us from their homes,” said Rincones with a smile. (I)

In Venezuela, a mega-concert with 12,000 musicians was held to break the Guinness Record for the largest orchestra in the world | International | News