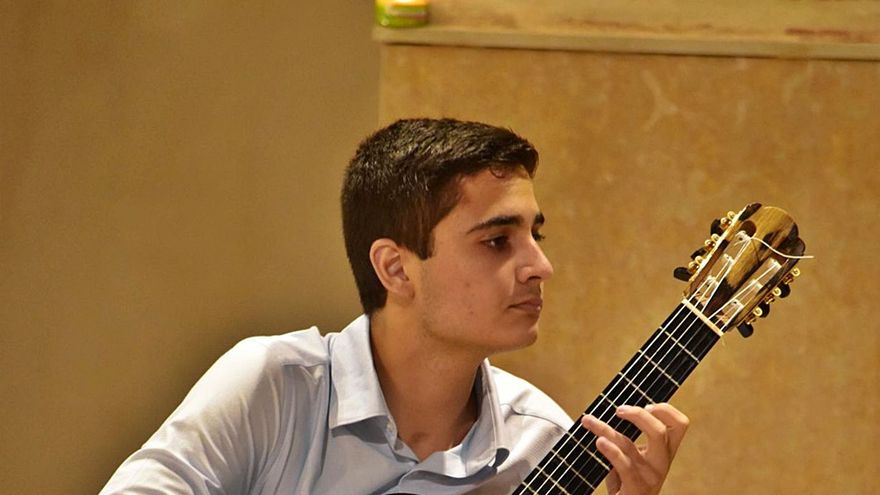 In a few days he will begin 1st year of Baccalaureate at the IES Francesc Ferrer i Guàrdia in the capital. Last Monday the VI Gandia Guitar Contest opened with a concert with Abel García, at the Casa de la Cultura. The interview took place last Wednesday, moments before the closing of this contest.

How does a young man his age come to specialize in this instrument?

Well, my father is a guitarist and I have always had a very direct connection to music. Also, I have uncles on my father’s side who are musicians. Since I was little they took me to listen to concerts and guitar festivals. When I was 5 years old, I already started playing in front of the public. And for three years I have been giving several recitals.

How much time do you spend a day rehearsing?

I usually play about two hours a day. In summer, or when I participate in a contest, a little more, three and a half hours. But in general it is more important to be constant, to play for an hour a day, for example, than to start playing all afternoon on a Sunday. I take my studies well, I can combine it.

What are your musical references?

I usually listen to orchestral music, because before being a guitarist I consider myself a musician, and in this sense I like Beethoven and the Russian composer Shostakovich.

Have you composed a song?

I have written something, but what is it, I still do not consider myself a composer.

To be a good guitarist, do you have to have an innate spirit or can you learn it?

I believe that the family environment in which you are born is important. And have a sensitivity for art. But it is a potential that has to be exploited, studied a lot, and take advantage of the time, as I mentioned before.

What guitar do you use? Do you have a predilection?

I have a Spanish guitar from the luthier Daniel Bernaert. I use the traditional one, from the «granaína» school. It sacrifices sound for exceptional quality, and offers greater playability. The sound is very warm and adapts to what the guitarist wants. It has brightness, it does not confuse the notes, but that, on the other hand, has the risk that any flaw will be noticed much more.

Would you like to continue with your musical training? Where do you see yourself in 10 years?

Well, I would like to live by doing concerts and giving master classes, without having to join a conservatory or an academy, but I see that in Spain as very difficult. Therefore, yes, it is necessary to have a musical training, a degree.

In 2018 he recorded his first CD, «Con tanto tenerezza», accompanied by his father and with the collaboration of jazz figures such as Ximo Tébar and Víctor Mendoza.

Yes. I recorded it when I was 12 years old and we premiered it at the Palau de la Música de València. The idea of ​​having a CD came from my father. He was teaching guitar at the Conservatory of Valencia, some Asian students heard me play, and they asked him for a record, but we didn’t have one. As a result, we launched this work.

Is there any difference in style between Valencian guitarists compared to those from other territories?

More than that distinction, I think there is a Mediterranean way of playing, with more taste for a lively and intense interpretation, unlike Central European guitarists, who are more concerned with making the notes sound more polished. I think that Mediterranean guitarists take more risks, which the public appreciates, but there is more danger of making a mistake in a note.

What do you think of electronic music, composed by computer, where you do not need to physically have a guitar or any other instrument to include its sound?

The truth is, I have nothing to say in favor. I see that more as sound effects than as a true composition. The composer’s creative work is loaded.

Finally, recommend three pieces that you like, or that you consider essential in the history of the guitar …

Well, the Aranjuez Concert, by Joaquín Rodrigo, must be there, of course, because it made the Spanish guitar known throughout the world. Personally, I would add Capriccio Diabolico, by Mario Castelnuovo-Tedesco, and the Fantasia-Sonata, by Joan Manen.