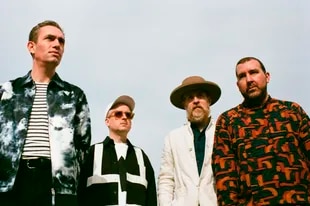 “What I said sounds serious, but the show is going to be fun,” closes his first response Alexis Taylor, leader and one of the founders of Hot Chip, a band that is performing today at the C Art Media Complex. “We haven’t played in Buenos Aires for a long time, and even more so since we haven’t played outside the framework of a festival. For bands like us, who started in very small places in the UK, having an audience all over the world is not something we take for granted, it is not something common. And we know that things have been difficult for everyone in recent years, so we are very grateful that they spend money and take time to come see us, ”the singer had begun before the rigorous question about his show tonight.

And that idea of ​​sounding serious but actually being funny can somehow sum up the concept of Hot Chip, a band with a lot of electronic music and a dance spirit with lyrics that navigate through themes of the subconscious, dreams and the relationship between the man and machines. The son of a psychoanalyst mother, Alexis Taylor is very clear that this combination is part of the aesthetic core of the group: “My mother has influenced me, surely. I’ve explored the idea of ​​the unconscious in music and lyrics and it always takes you back to Freud, which is what my mom read. I never analyzed or read Freud that much, but I am very aware of his key ideas. Music is the way I have to understand my unconscious, I don’t know exactly how, but I use music and writing for that, to see what lies beneath the surface, what is really meaningful to me.

-Do dreams inspire you to write?

-“Now there’s nothing” is a song based on a dream, but the melody, not the story. It happens to me that I dream melodies, I wake up and look for a way to follow it, to write the lyrics of that song. It deals a bit about sleeping and waking up and how some memories from the past try to connect in the unconscious, but also how you connect with someone you lost in your life and I relate that to the relationship I have with my family and my daughter, surely everything that is an influence of my mom (laughs).

-Do you think that Hot Chip is a band that makes you dance to subliminally talk about intense things?

-I was thinking about that recently, because there is a relationship between melancholy and the treatment of the subconscious in dance music, which is uptempo and optimistic. And while there is some truth in that hypothesis, I also think that the melancholy sound that we achieved with John (Goddard, his bandmate) is something natural to both of us. The other day he sent me something that was clearly uptempo and to dance, but the synthesizers had a melancholy vibe, before I wrote a single word. There is no rule, we do not always do the same thing. Sometimes it’s thought that he makes the hooky music and I put melancholy lyrics on it, but I think we both do both at the same time. And we are not the only ones in the band, the rest also bring their own. I don’t want to over-psycho-analyze the situation, but John lost his mom when he was very young and I think there is a side to his music that has that melancholy, and of course it also contains that attempt to be happy and content, because that’s what anyone in the world aspires to. his life. So a lot of our music can deal with that, not all of it. It is an explosion of something positive and it has to do with the fact that you can also take care of the other part.

-And as for the counterpoint of sounding melancholy in a genre that should also be thought of as futuristic?

-It’s that I don’t see melancholy as something that necessarily looks back, because maybe you look inward right now or you feel that the future is challenging for you and all that makes you melancholy. All of us at this time are more aware and concerned about the future, about the planet and the care of animals. I don’t know if there is opposition between melancholy in the future, but anyway, when we started making music we set out to be more original than futuristic. We listened to experimental productions, like Timbaland and The Neptunes, which sounded like the future to us, but now they are the past, so my analysis sounds anachronistic. But yes, they sounded ahead of their time, even for minor details, and we liked that, but we liked them mainly because they were creative. I can’t deny that I love 70’s, 80’s and 90’s sitcoms, but it’s how you use them much more than what. It happens to us from being in the studio and someone saying “This is very good, but very retro, how do we make it sound futuristic or current?”. And there are many new ways of thinking about music, which is something that always interests us.

-And what approach attracts you now?

-In how to put the elements to play. In the pleasure of making music and how the layers of sound, of percussion, of the words coming into relation with the music, the acoustic and the electronic, are combined, the way in which all that is mixed in a groove. Between ’99 and 2001 we made a lot of music, it was before our first album. Everything we published before was in small runs, material that we published in 20 or 500 copies. From there we learned to do something and move forward.

-There are Hot Chip songs that became hits even though they have very strange structures. “Huarache Lights”, for example, have a chorus that takes two and a half minutes to arrive, that would be unthinkable for an artist deliberately looking for a hit.

-I hadn’t thought about that before, it’s a song that we must have played 100 times and we never thought about what the chorus was and if I was late, although it’s true. I think it’s because we thought of it more as a hook that the song has, so it didn’t feel like something that we had to put in a particular place, but how it worked with all the other sections of the song. There are other songs that have no chorus and others that are all chorus. But the truth is that when you don’t think about those things, you make better music. When we do things in a conventional way or try to have a hit, which almost never happens but sometimes it does, usually it doesn’t go well and we fail. “Huarache Lights”, “Over and Over” and “Ready for the Floor” are hits but they are rare, and they have strange lyrics, they don’t say “I love you and I miss you”, they have phrases you haven’t heard before, they are not set phrases. Maybe “Over and over” yes, but the others don’t and we think it’s great that the public ends up adopting them.

The chorus of “Huarache lights” says: “Replace us with things that do the job better”, and I was thinking of the critic Kodwo Eshun, who, speaking in favor of technology in music, said that “machines intensify our emotions”. Do you think there is any contact between both ideas?

-I don’t know Eshun, but it’s something I’ve been thinking about for a long time. See that keyboard behind me? It’s a vocode. And I don’t really know why, but for me the emotion is intensified when you sing with a vocoder. It has a very big impact; if you listen to Laurie Anderson, it’s the combination of her humanity, her pronunciation and her voice combined with the filters of the machine that makes it interesting. She feels emotionally rich and fascinates me, and I try to make music that has that interplay between something scheming and something less scheming. Sometimes I like to combine it and other times go to opposite extremes. Acoustic instruments like a saxophone or a double bass or a harmonium are also machines to some extent.

-Have you ever said that you have read Borges, how did you get to him?

I have read it in English. My mom was probably the one who told me about him for the first time. And the first thing I read of his was Labyrinth Y Pierre Menard, the author of Don Quixote. They must be one of his best-known works, and they are also my favorites. From then on I read a lot about him and I usually go back to writing about him. I have his poetry collection but I haven’t read it yet. It was a combination of recommendations, because Neil Hagerty from the band Royal Trux recommended it once in an interview and that piqued my interest as well. Every time I go to Buenos Aires I like to think about the places in his history and where Borges lived, in addition to the good food they have there and the antique places, which I also like a lot.

Hot Chip: the melancholic English band that reads Borges and knew how to make the whole world dance