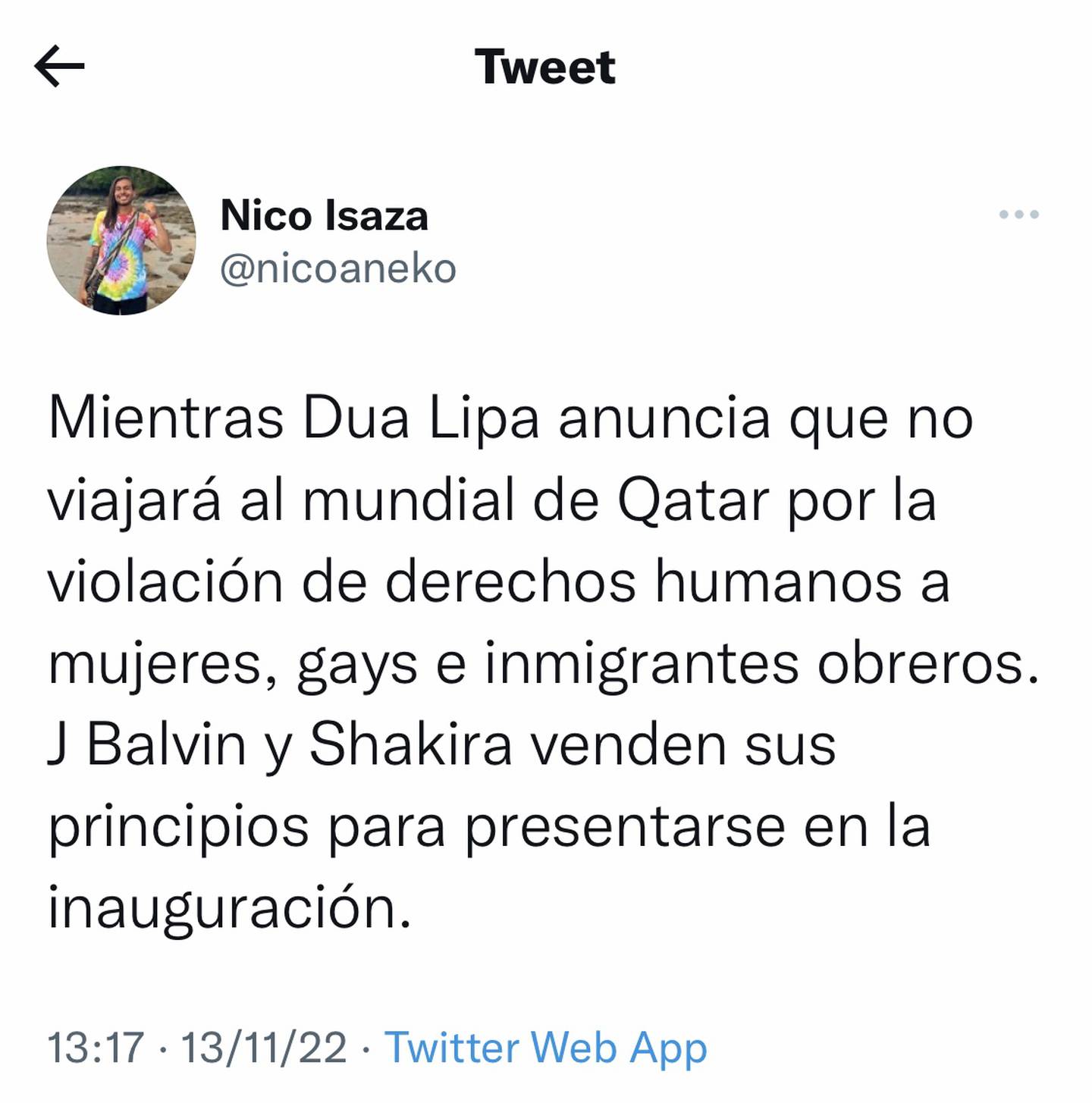 Yesterday, the pop star, Dua Lipa, endorsed his position regarding the World Cup in Qatar 2022explaining that despite what could be speculated about his possible participation in the inauguration event, this would not be possible, not until human rights are respected in that country.

It was through a message on their Instagram stories that Dua Lipa He shared a message in which the following could be read:

“I will not act and I have not been involved in any type of negotiation to present myself. I will support England from a distance and I am looking forward to visiting Qatar as soon as they have fulfilled the human rights they committed to when they won the right to host the World Cup.”

They were minutes after the singer published this message, that the network turned on and Internet users began to give their opinions regarding the other possible talents that they would have accepted. Among the celebrities who were harshly criticized were the singer J BalvinBTS, Shakira and Black Eyed Peas.

Despite the fact that music is one of the things that moves and will move the world, some fans were disappointed to see your favorite artists show up at an eventdespite the fact that it is important in the sports field and in the world, Its headquarters have been controversial, for being a highly conservative country.

In the World Cup in Qatar, a series of things that in other countries could be completely normal will be prohibitedthe main thing about that country is its position regarding the LGBTQI+ community where there is zero tolerance for its displays of affection.

The entry of alcohol will not be allowed eitherthe clothing is also important, because you have to cover shoulders and ankles; shouts of celebration are not accepted, nor the photographs of women or public buildingsamong other restrictions.

Although the public was empathetic regarding the separation of Shakira with the soccer player Gerard Piqué, making his songs go viral, sending him messages of support and even reaching the point of discrediting his ex-husband and his new partner Clara ChiaThere are things that are important to keep in mind, users do not forgive no matter what.

Soon, Internet users began to comment on Shakira’s presentation at the World Cup in Qatarsaying that she along with her stage partners “They had sold their principles to appear at the inauguration.”

Others said it was not possible for them to have defended Shakiraso that she ended up appearing in “A place where gender violence is not punished, where women are sent to jail if they get pregnant, where they need permission from men to carry out different tasks in their lives. ‘Check your idols.’”

Many others, too defended the community LGBTQI+Well, Qatar is one of the countries that has shown less empathy towards these people who have not received the rights they deserve.

We will have to keep an eye on how the World Cup activities unfold and see if the Colombian will give any statement about her presentation.

“He sold his principles”: they criticize Shakira for appearing at the World Cup for this reason