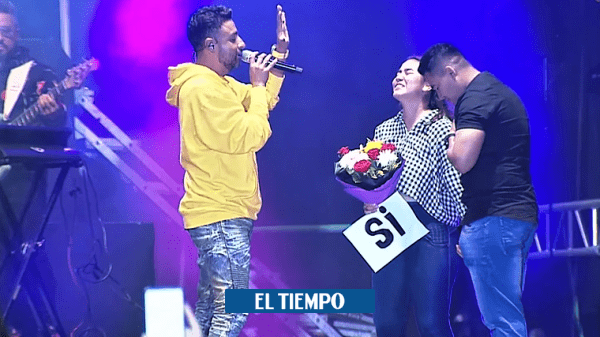 Advance version 65 of the Manizales Fair, which for the first time included a Christian music concert on the main public stage of the city. And it was precisely the concert called ‘La noche de la esperanza’, which had the singer-songwriter as its main artist. Alex Campos, the space chosen by a boyfriend to ask his partner to marry him.

(We recommend: Manizales Fair 2022 began amid the increase in covid-19 cases)

The engagement took place on Monday night in the Plaza de Bolívar, while Campos, a Colombian and winner of five Latin Grammy Awards, sang.

“What is happening there that everyone is watching?”asked the artist, who was shown the sign with the yes. The singer-songwriter brought the couple up to the stage, who said that they have been dating for a few months, but that they already want to get married.

(Read also: These are the vaccination and covid test points in the Coffee Region)

In the middle of the congratulatory words, Campos dedicated one of his most emblematic songs to them, ‘Tu poeta’, which the singer-songwriter wrote in honor of his wife.

I hope that you do not forget this moment and that, when you go through a crisis, you cling to the only thing that can take you to the end: Christ

In the middle of the performance, the artist also raised a prayer for the future couple.

“There is no perfect marriage, whoever marries thinking that he will not have problems takes a wrong step (…) I hope that they do not forget this moment and that, when they go through a crisis, they cling to the only thing that can take them to the end: Christ “, were some of the singer’s words.

With around 12,000 people, this second concert culminated in the Plaza de Bolívar, where there will be free activities the rest of the week. Tonight, for example, the genre will be pop, with performances by artists such as Santiago Cruz Y Pasabordo.

Driver, apparently drunk, attacked police in Ibagué with his fists
Ómicron in Colombia: four new cases confirmed in MonteríaFind out which are the 10 best schools in Cali according to the Saber Tests