Tweet
Share
Share
Pin
After the announcement of the Guns N’ Roses concert in Bogotá at the end of the year, businessman Julio Correal was reminded of the anecdote of the first time he brought the band to the country. PHOTOS: Archive / YouTube Screenshot (VICE en Español)

It is a fact: Guns N’ Roses will arrive in Bogota. Those same words were heard in 1992, when the city -and the entire country- was going through a crisis of violence that had drug trafficking as its main cause; but with all that, several businessmen, including Julio Correal -co-creator of events such as the Festival Estéreo Picnic- achieved what, at the time, was a feat.

But despite all the vicissitudes generated 30 years ago, the ‘gunners’ return to the country’s capital and to the El Campín Stadium, an old acquaintance for Axl Rose and his group. After the announcement of this presentation that will be on October 11, there were not a few fans who reacted by remembering Correal’s anecdote about the tragicomedy that meant putting the group to sing in Bogotá.

“My role at the Guns N’ Roses concert was manager,” indicated the businessman in the iconic story delivered for the ‘Vice’ portal. But in that 1992 he wasn’t after the rock band, but he was flirting (musically, of course) with ‘El general’, because his song ‘El meneaito’ was booming in Bogotá. This is how the story began that was evoked today by hundreds of users on social networks, especially Twitter, where as soon as the date of the concert was announced, they did not hesitate to mention the cultural manager.

Even this Thursday morning the same He was amazed to wake up and find the news that moved thousands of fans of the “Guns” in Colombia.

You may be interested in: Welcome to FILBo! National and Korean film series, presidential debates and some of the guests at the Bogotá literary fair

Trino by Julio Correal after learning that Guns N’ Roses will arrive in Bogotá in October 2022. PHOTO: Twitter screenshot (@jucorreal) 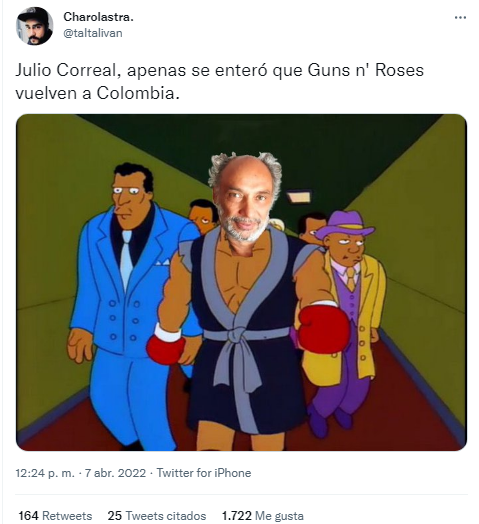 Will Axl Rose remember Correa? If yes, it will be a ‘war of the titans’ predicted by The Simpsons. 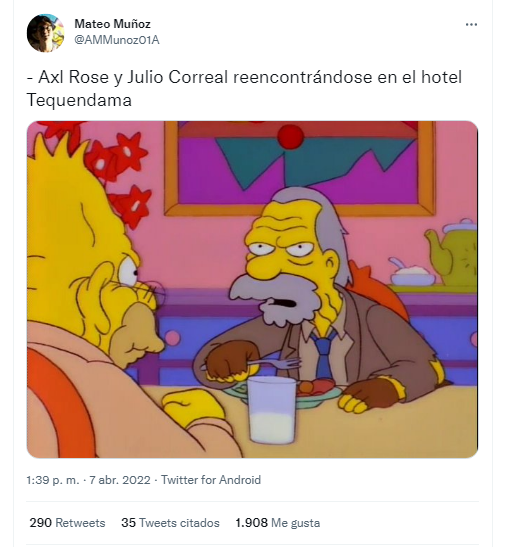 “Oops, these sons of bitches are going to leave”: Guns N’ Roses’ ‘rude’ in full concert in Bogotá

Just when the band started to play ‘November rain’ a deluge fell in much of the capital, including the El Campín stadium. No special effects were needed to feel the song with the skin, the eyes and the ears and more than 55 thousand souls saw how, behind Axl Rose’s piano, a deluge fell that worried the Americans.

At that, the vocalist told Dale Skjerseth, the band’s head of production: “Hey, Opiewe are ready to electrocute ourselves, we will be back ”, and ‘Don Julio’, who was rolling a -cheap- marijuana cigarette next to a police commander, had a bad feeling and immediately ran to the dressing rooms.

“Then I run out, queer, I go behind the platform, and I see their trucks already parked with the doors open, and I -I said- ‘Oops, these motherfuckers are going to go, fagot; oops, these motherfuckers are going to go, dude, not even for the whores”, Correal evoked Vice while grabbing his face with both hands.; and after he sees the chariots, he comes face to face with Skjerseth and doesn’t take him kindly.

—I confront him and say

Behind him there were several lights and sound workers, and before the exchange of words between both characters, they supported their boss: “Do it, Don Julio, do it quietly, Don Julio, do it.”

“It had stopped raining, and they hadn’t played Sweet child o’ mine’ or ‘Knockin’ of heaven’s door’, motherfuckers”, reported the Bogota; but the musicians and their work team left the audience waiting on the Campín grass.

Now, 30 years later, the question is, Will they settle their debt by singing those hits that were pending on that November 28?

Through Instagram, businessman Julio Correal shared what was the first concert of the “Gunners” in Bogotá almost 30 years ago. VIDEO: Via Instagram (julioacorreal)

Video: Vicente Fernández Jr. is visiting Cartagena and sings with a street vendor
This is the official song of the Vallenata Legend Festival 2022 that pays tribute to Jorge Oñate

“Hágale, don Julio!”: Correal was reminded of the anecdote from 1992 after the announcement of the Guns N’ Roses concert in Bogotá