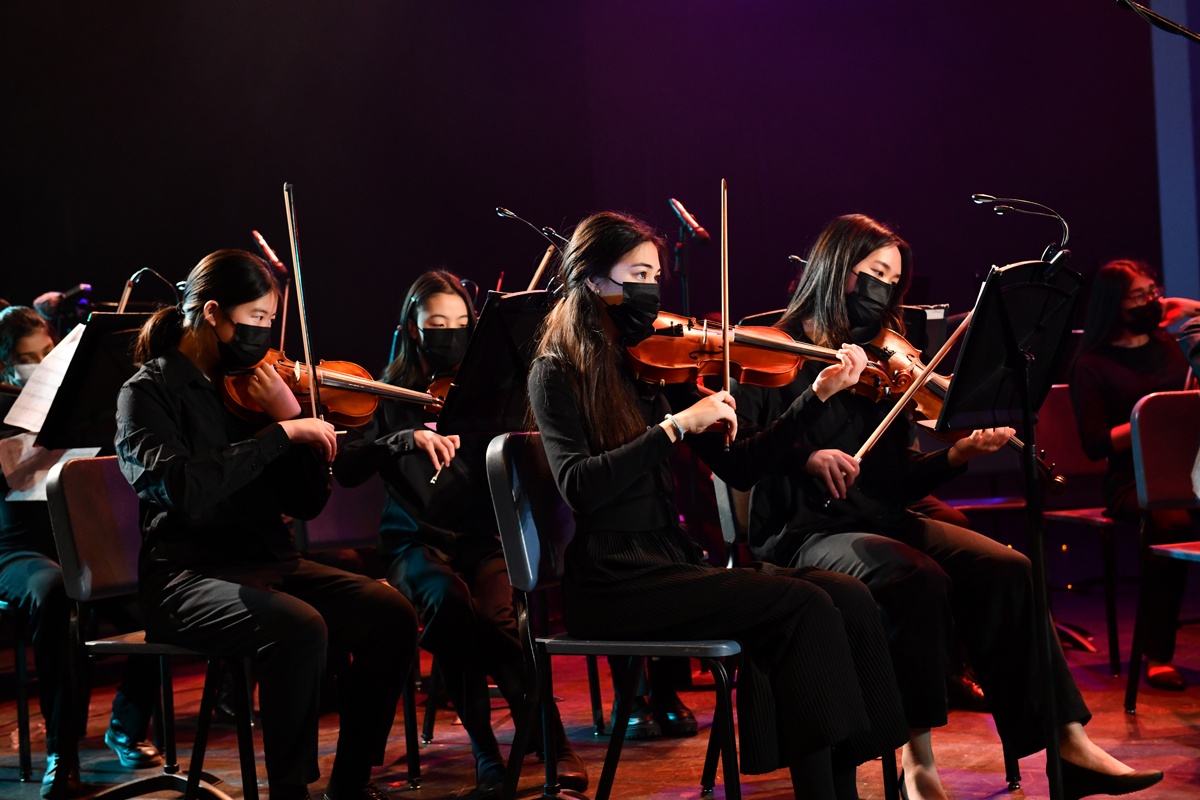 Hundreds of people enjoyed an impressive Latin strings concert called “Tango Nights” in which more than 150 young musicians participated, on the night of Thursday 16 in the auditorium of the Winston Churchill high school where they study, located in the Potomac area. of Montgomery County, Maryland.

The audience, for the most part relatives of the precocious artists, repeatedly applauded the various themes of well-known tangos, performed with masterful execution. And the applause was directed especially to the musical director of the Churchill school, Kristofer Sanz, through whose veins Cuban blood runs.

At the end of the concert, Sanz, very moved, thanked the assistants and his students and later offered an interview for Washington Hispanic, in which he praised the passion that springs up in each of his musicians.

“Teaching music to young people is something very special, since these boys put their heart, their soul and every ounce of their being every time they perform it. There were 150 hearts beating as one on stage and that is why it was such a magical and incredible experience ”, he affirmed.

Sanz has been at the Churchill school for 17 years now, conducting its youth orchestras that perform in four concerts a year. He is also the musical director of Maryland classical youth orchestras, such as the Strathmore Youth Orchestra.

“I am of Cuban descent, my parents are from Cuba and many years ago they emigrated to the United States, so I have always carried music in my blood,” says the musical director.

Sanz said that a couple of years ago he met an arranger who was working with beautiful tangos for a string orchestra. “So we decided to collect all of them, and that’s the kind of concert we’ve done.”

“All the music was Latin-inspired, from different places, with some Mexican pieces in the mariachi style, as well as Spanish themes for guitar that were arranged for orchestra,” he mentioned.

Kristofer Sanz said that her professional career was oriented towards musical work with adults, “but there is something very special about the experience I have with young people.”

Activating his arms, Sanz highlighted that his students “put their heart and soul and every ounce of their being every time they play music and for me that is my best reward.”

Excited, Sanz noted that Thursday was one of the first great concerts after the forced stoppage due to the pandemic. “So to have the opportunity to meet all of us again and have 150 hearts beating as one on this stage is a truly magical and incredible experience.”

In “Tango Nights” participated more than 150 musicians of string orchestras, belonging to grades 9 to 12 of Churchill School.

And why the tangos? To that question, Sanz replied, “We have made music by all the big names, but one of my educational goals is to make sure my students have the opportunity to experience all kinds of music. Because while a well-rounded musician is good, he must also be able to appreciate all areas of life, all aspects that make the world beautiful. “

He says that to this was added the fact of being Latino. “Having that passion inside me, I wanted to share it with them and, in fact, it is very difficult to find musical arrangements for a string orchestra. And when I found these tangos, I knew they were the most suitable for the instrumentalists I had, and now we have about six or seven soloists, on violin, viola or cello ”.

Also, the musical director was happy because the presentation of the concert brought to light “all the beautiful Latin music to our community.”

Churchill orchestras have about seven or eight Latino students. “They were very excited when they received this repertoire and their parents sent me an email thanking me for the time spent honoring our culture, which is not widely publicized in this area of ​​Montgomery County.”

Sanz introduced us to the case of Ashley Alarcón, one of his Hispanic students. “She is now a violinist. It never had been before. We have so many incredibly talented students in music and at first she didn’t feel like she was one of them. The interesting thing is that of all my students Ashley is one of those who was most passionate about being in the group, and she always appeared balancing her workload with that of the orchestra ”.

“Later I discovered that he plays the guitar, so in these tango concerts he has played that instrument. And while I’m not sure if she is heading into music in college, I do know that she is one of those people who will always support the arts in which she has developed a deep passion. “

Finally, Sanz had words for young people who want to venture into this type of art. “It is something that I preach to my children all the time and it is that music is something so beautiful and powerful. There are many children who study at Churchill School, there are more than 2,500, but when they get together in the orchestra it is a place where they can be themselves. Where they don’t have to be fake, where they can bare their soul, where we can laugh together and cry together. And the most important thing is that we are always there for others and it is a community, a family, where you can live your life because you know that when we are together it is a safe and simply beautiful environment ”.