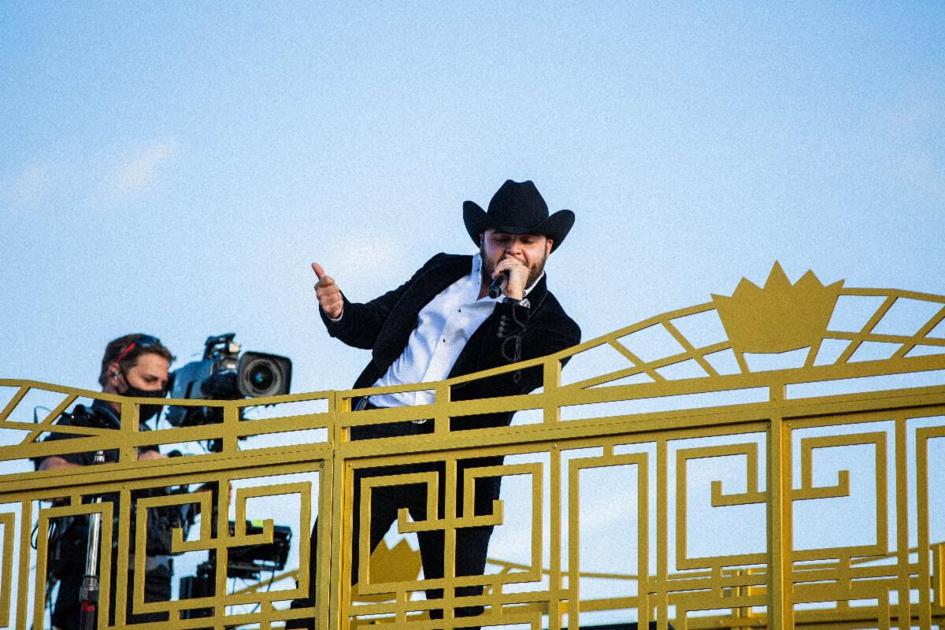 LOS ANGELES – Gerardo Ortiz, considered one of the most influential artists in Mexican music, has given a historic global concert traveling on wheels in the city of Los Angeles.

The first Uforia Live of 2021 is a total triumph for the Latin superstar.

The virtual concert was held in celebration of his 10 years of artistic career.

The singer-songwriter of the Mexican regional genre offered a one-hour show on an elevated stage, circulating at 5 miles per hour.

The truck was equipped with a first-class production that bore the image of Gerardo Ortiz and the stamp of the crown that represents the official cover of his album “Tenth Anniversary.”

The graphic design was done by the Vizual Inc. team who have taken charge of their visuals in the last decade.

Accompanied by a caravan of luxury cars, the tour began at one of the most iconic bridges in Los Angeles where the city’s skyline was appreciated.

As never seen before, Ortiz toured the most important avenues singing all his hits such as “Cara a la Muerte”, “Fuego Cruzado”, “El Cholo”, “Para qué lastarimarme” and his most recent songs “El Perro”, “Historia de Ayer ”, and“ Tranquilito ”.

With an appropriately selected repertoire, Ortiz surprised his audience when he invited his brother Kevin Ortiz to the stage to sing the song “As You Are”, which has been one of the most popular collaborations among his loyal fans.

On numerous occasions during the route of the route, the singer thanked his online audience and followers who accompanied him during the tour, expressing the great support they have given him throughout his broad career.

“How beautiful that we had to celebrate here in Los Angeles these ten years that are very significant for us and that have been incredible for my career,” he commented.

Closing with a flourish, Ortiz ended his virtual concert to the rhythm of a band where he delighted the audience with some corridos from his repertoire.

The concert was linked by means of UforiaMusic.com and all its digital platforms as well as on Gerardo Ortiz’s official YouTube channel.

Gerardo returns on October 2 to the city of Los Angeles, to the prestigious Microsoft Theater, where the singer wishes to celebrate his birthday with an intimate evening.