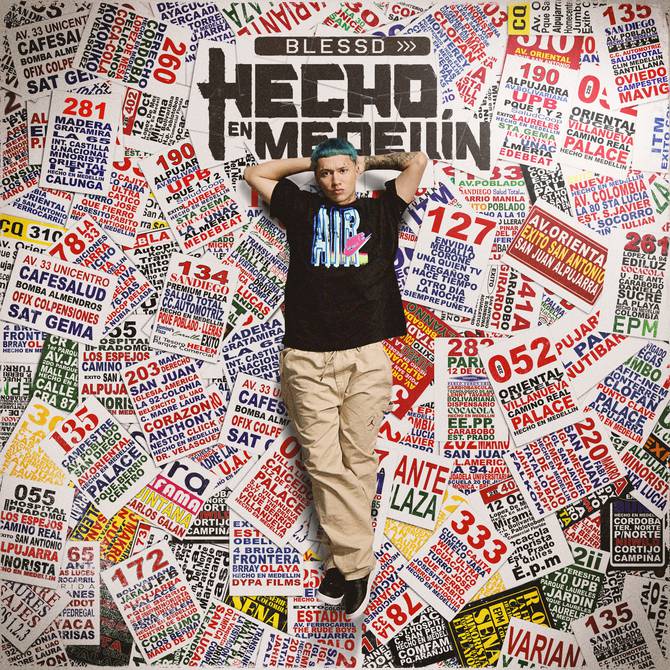 Medellín is his home, his music, his roots. This Colombian city represents their dreams, goals that were put to music and that made their countrymen take ownership of them (their songs) and by singing them they made other countries listen to them, turning Steven Mesa Londoño in one of the representatives of the new generation of Latin American urban music.

Mesa is the rapper’s given name Blessdperformer of hits like medal, simple that follows Made in Medellin, title of his first album that presents his avant-garde vision of global urban sound, from his homeland. At 22 years old, the new musician shares the various influences, sounds and immersive collaborations that shape this conceptual work that has brought him together with other exponents of the genre (Lyanno, Jamby, Brray, Justin Quiles, Lenny Tavárez).

“This is the main song of the album and with which we open this important release, medal It is the song that sounds like my city and that I also have tattooed on my skin (…) My biggest dream is that my music, my album and all my songs are sung and heard in all corners of the world and that people know to Medellín, my Medellín the way I live it”, affirms the interpreter.

With a career built by hand, the Colombian knows thoroughly the value of sacrifice. In his early days, the money he earned from selling candy at school and supply centers was used to pay for his first productions in parts. The amount collected was used to pay for a production that had a cost of between 100 and 200 dollars, approximately.

Last Friday, the General Rumiñahui Coliseum -in Quito- served as the stage for the show that he presented in Ecuador as part of his tour Global Trend Tour, with which he will tour Mexico, Colombia, Costa Rica, Puerto Rico, the United States, and Europe.

How have you felt with this presentation that brought you to sing in Ecuador?

The truth is that it is very nice that such a great result can be seen in such a short time, grateful to God and the team for everything we have done in such a short time, but obviously being sincere and knowing that we have earned it with work and discipline and super happy to be in Quito. Super grateful to come to the second country where I always go out and I am number 1 or number 2, in a country that is not mine and it is a double effort, but I feel here because of the love and affection that I feel and I know that all the time I They listen and I have a lot to gain from coming (returning) and knowing much more about me and showing them a little more about my culture, and knowing more about the country.

Made in Medellin It is not only the title of his first album but the slogan with which he presents himself, it is his label and the proof that denies the phrase ‘no one is a prophet in his land’, by making it his hometown, his first audience in support .

It’s very nice, that was a phrase that everyone used and we denied it, we showed that in Colombia they can also support the little land thing and we opened a door that was closed ten years ago, that no new Colombian artist came out or didn’t come out a litter of new Colombian artists and we came out and well here we are representing and showing that there is a new strain of artists, new talents and here I am, thank God, leading and being in the forefront.

How did Stiven become Blessd, an international star on the rise?

I used to work in a market place in Medellin and I sold sweets at school and it was the only way I got money because I didn’t like asking my parents. I come from a normal family, because we had to survive and that’s it. That’s how I started, selling sweets, I sang to the girls at school so that they would buy me sweets, I bought my clothes and my little things on my own, until one day, a girl told me that she had a relative who made clues, who did instrumentals and that’s how I started and now look where we are, thank God.

From the time when you had other jobs to finance your music, what did you learn?

These experiences, often unknown, serve as inspiration for emerging artists, what advice do you share with those young people, who like you at the time are working on becoming artists independently?

I think that Blessd, that they know him all over the world and that he can’t even go out on the street, that people feel a lot of fanaticism for Blessd. And to Stiven, to have a family, to have my children, to have my home, a wife, my grandchildren, I have always dreamed of that and for the first time I want my family to change, not as expected to be given clothes of an older brand new cousin, if not that since they are born, my children have everything and I can be happy with them.

Your first world and face-to-face tour, after a time confined, how do you live getting on stage in front of the public that sings your songs?

The truth is that it is super nice and I feel that it helped me a lot because, being locked up for so long, people came out euphoric at the shows and the presentations and since we were new, people also wanted to hear something fresh, a different sound and thank God here we are making the most of everything being normalized.

In the next Blessd premiere, what story will you tell us and rhythm will you bring us?

The next premiere is in the middle of this month and it’s going to be a totally different song, it’s not reggaeton, I’m going to go out and propose something different to see what happens and if nothing happens, well, I have fun doing it, which is the important thing. (AND)

From selling sweets and paying for your recordings in installments, to offering international concerts, meet Blessd, the Colombian rapper who brought his music to Ecuador | Music | Entertainment