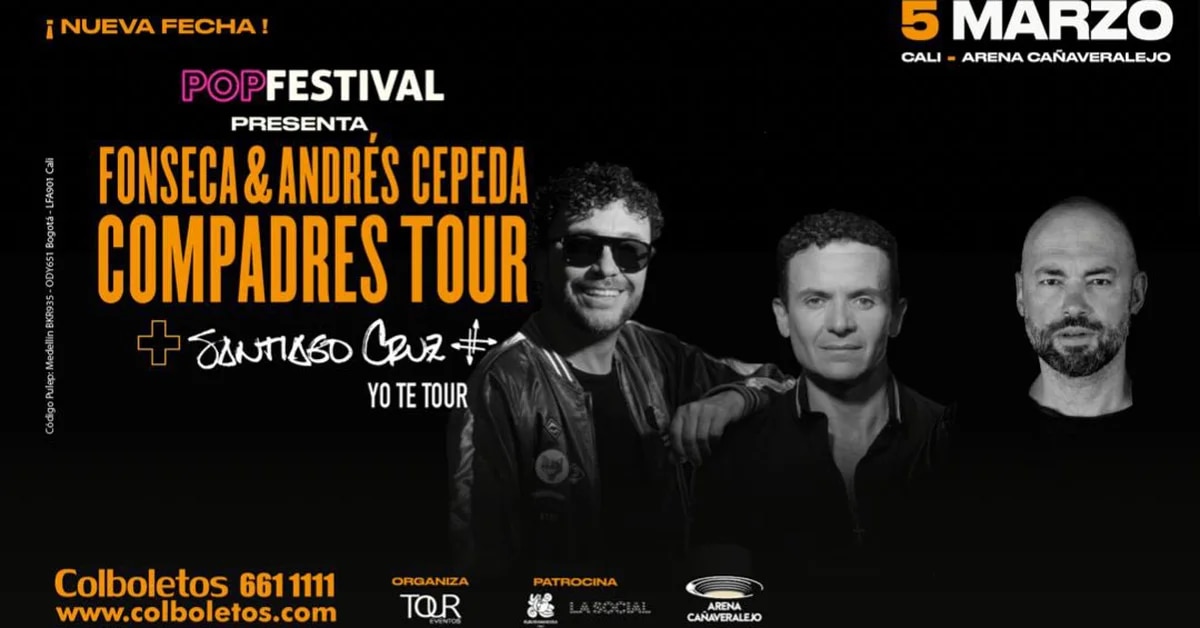 Fonseca, Cepeda and Santiago Cruz at the closing of the Tour Compadres Twitter – @Fonseca

2022 brings with it great advances in economic reactivation and the return of the public to many leisure and entertainment spaces, among these, concerts prevail. On this occasion, Santiago de Cali will receive a very special reunion, as three great artists of the pop music genre will arrive at the branch of heaven to delight with their music, they are Santiago Cruz, Andrés Cepeda and Fonseca.

Everything will take place in the Cañaveralejo Arena, which is located on one of the main streets of the city, Fifth Street. The Pop festival will be held on March 5 and will bring together the three great stars of this genre in the country, who, at the closing of the first cycle of the Compadres Tour, want to lower the curtain in the best way.

Mainly, the tour is made up of Andrés Cepeda and Fonseca, however, as a bonus and special guest, Santiago Cruz arrives, who in addition to this, has been adding revenues in Colombian music thanks to his latest success ‘December Again’ accompanied by an important book which is on sale in the country’s main bookstores since its launch in September.

The concept of the concert brings the spectator a completely different experience thanks to the implementation of a state-of-the-art sound system, which seeks to nuance each of the voices that will be on stage, in addition to this, thanks to the opening of capacity in the city, there will be 10,000 people who will have the opportunity to enjoy this event.

Another point to take into account is the technological concept to be at the forefront of the largest events worldwide, since the implementation of LED screens and robotic lights will provide a close experience to concertgoers, the game of screens with a high level of pixels, it seeks that, despite the distance, the artists are only meters from their fans in the technological spectrum.

Ticket prices vary depending on the location, although some are already sold out, the value to pay ranges between 110,000 pesos in general and $400,000 for boxes, since the super platinum zone is already completely sold out, however, this concert resumes after being postponed due to the COVID-19 pandemic, in the case of those people who bought their ticket in 2020, they will be able to validate it for entry to this event.

The Cañaveralejo Arena is a unique stage within the city of Santiago de Cali, since from anywhere it has an exceptional view of the stage, it must be taken into account that this space was built for the performance of bullfightswhich in this administration have been temporarily suspended, however, could return in a future term.

The followers of Santiago Cruz will also have the opportunity to share with the artist, because before the concert, on March 4, the singer will be at the Unicentro shopping center in the signing of his latest book ‘December Again’ titled the same as the last musical success he had last year. The activity will take place from 4 pm in the shopping center that is located south of the city of Cali.

The capital of Valle del Cauca hopes to determine new measures regarding the covid-19 pandemic, since the elimination of the use of face masks in open spaces remains in suspense, since the city has not reached 70% coverage regarding the application of the first and second dose of the COVID-19 vaccineIn this case, the plan of the local authorities is to strengthen the vaccination spaces to reach the desired figure.

Fonseca, Cepeda and Santiago Cruz will meet in a concert Santiago de Cali