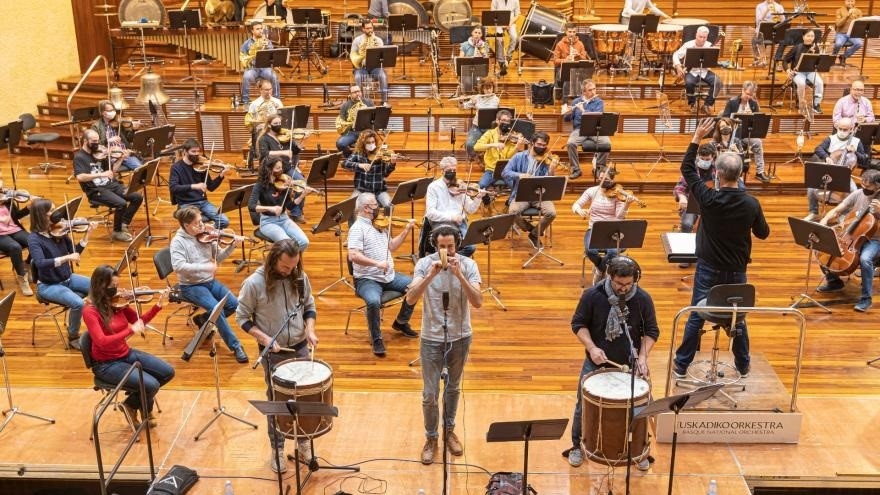 Euskadiko Orkestra and Kalakan will offer five concerts from October 20 to November 5. Both groups will present their new album in different performances in Pamplona, ​​Vitoria, Bilbao, San Juan de Luz and San Sebastián, which has been released under the Elkar label and includes twelve songs from the Basque tradition.

This project is presented within the framework of the ‘KlasikAT’ initiative, through which Euskadiko Orkestra channels musical production that “goes beyond the usual repertoires”.

Tickets for all concerts are on sale at a price of between 10 and 26 euros on the euskadikoorkestra.eus website, as well as on the website and ticket offices of the halls.

The main objective of the project is to “merge Kalakan’s effort to renew Basque folklore with the classical world”, explained from Euskadiko Okestra.

The composer Jagoba Astiazaran has been in charge of translating several songs previously published by the Basque-French trio into orchestral language, among others, ‘Iruten ari nuzu’ or ‘Kantuz’. Several of the traditional instruments that the Kalakan group uses regularly have a great role in the album, such as the txalaparta, the txirula or the alboka, all instruments that have been integrated together with the rest of the instrumental sections of the orchestra.

In addition to all this, several lyrics by the bertsolaris Xaldador and Bilintx are included in the recording, in pieces that have been created expressly for this project, as well as a completely different version of ‘Txoria Txori’ by Mikel Laboa and Joxean Artze.