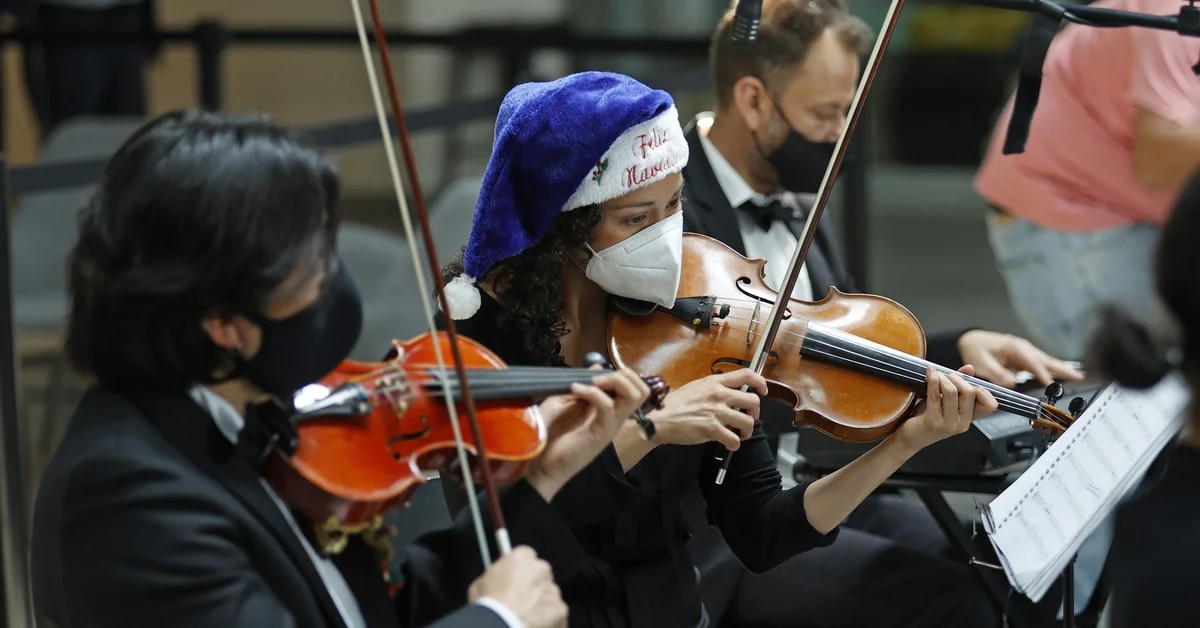 
Travelers from Bogotá’s El Dorado International Airport were surprised this Tuesday with a concert at the air terminal, which seeks to return to normal after the country overcame the worst peaks of the coronavirus pandemic.

The concert was in charge of the Scherzo Chamber Orchestra who performed classical music and typical Christmas carols such as “Tutaina” Y “The sabanero burrito“, To which he added Colombian themes such as”The canoe”.

The singer was also part of the show Maggie ArMont, who wrote the theme “New World” for the El Dorado airport and its visitors.

The letter refers to the changes brought about by the pandemic and the challenges that Colombians have faced due to this difficult situation derived from the covid-19 virus.

The general manager of El Dorado, Andres Ortega, referred to the cultural event that occurred in the facilities of the main terminal in Colombia.

The executive indicated that what is intended is reach Colombians and the airport community with this message of hope in the midst of the reactivation.

Recent history has shown us that we can transform and adapt to the demands of the new world. Despite the uncertainty, together we can build new opportunities ”,

María Helena León, a traveler who was going from Bogotá to Bucaramanga, told Efe that it was the first time she had seen a show of this type at an airport: “The concert is comforting especially for these times of pandemic. Everything has been very hard, but this relaxes the spirit and it is also the opportunity to hear something different.”, Expressed for the international news agency.

With information from EFE.

Puente Aéreo and El Dorado operations were reactivated in December

Since last Saturday, December 6, the Bogota Air Bridge Terminal, attached to El Dorado International Airport, with which users will have 30 new routes, which will connect the capital with the rest of the country.

“The reopening of the Air Bridge is excellent news, as it will allow us continue generating connections from Bogotá to all of Colombiaso continue to advance in the economic reactivation from different sectors throughout the national territory, “he said. Andres Ortega, CEO of El Dorado, in a statement.

“With the change, it is expected to achieve agility in the processes, comfort in the services, more personalized attention and a quick approach, factors that have been impacted at the El Dorado airport by the large number of aircraft that operate and the influx of passengers that move daily from that terminal, “said the airline, in statements collected by Volavi.

The Puente Aéreo will have a connection by satellite bus with the El Dorado Airport. Bogota Colombia. Photo: private file

On the other hand, EasyFly active 10 routes, connecting Bogotá with the rest of the country. Yopal, Neiva, Arauca, Pereira, Florencia, Manizales, Popayán, Quibdó, Puerto Asís and Barrancabermeja, are the destinations announced by the company in the reopening.

For the connection between El Dorado Airport and the Puente Aéreo for travelers they have a satellite bus, which works between 5:00 am, and 11:00 pm, with frequencies between 15 and 18 minutes. In addition, the parking lot of the new place will have 336 spaces for cars, 63 of motorcycles and 26 of bicycles.

On the occasion of the end of the year, a time in which many users take advantage of the trip, the Civil Aeronautics (Aerocivil) announced that, since last October 30, it increased the operational capacity of El Dorado, passing from 47 flights per hour to 65, thus attending to the increase in the flow of passengers.

“This increase in operations in El Dorado is in favor of the economic reactivation of our country, the increase of the airline industry. Preparing for the end of the year and the high season in which we expect a large percentage of passengers”, Reported at the time Rolando Riaños, Deputy Director of Civil Aeronautics.

As part of the implementation of these new measures, Aerocivil reported that The working groups of traffic controllers will be reorganized, which per shift are around 16 operators. Thus, in accordance with the aviation agency, the biosafety protocols established by the Ministry of Health.

“I chose to be black”, statement by Isabel Cristina Zuleta generated reactions among followers of the Historical Pact – Infobae
Colombia received third batch of 890,000 doses of Janssen – Infobae