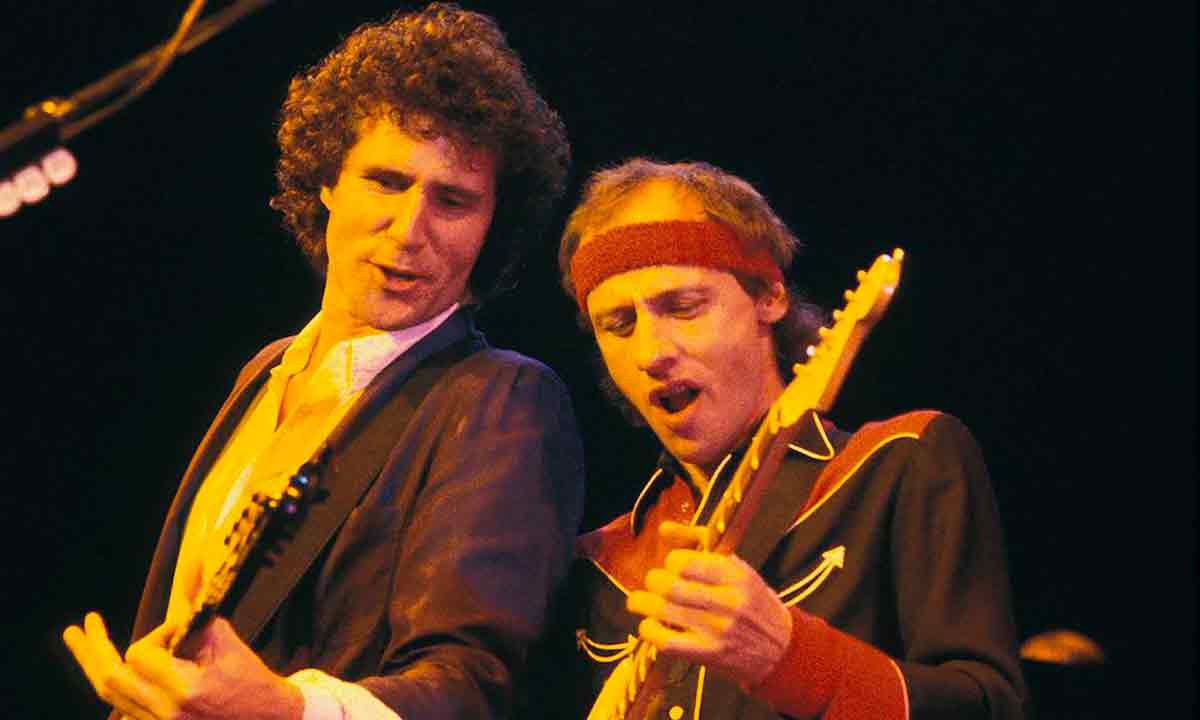 In our magazine La Galerna there have been many musical groups that have received the desired title of “Madrid bands”, demonstrating their Madridismo with arguments and great judgment, in addition to the talent of the columnists who demonstrated such affiliation.

Not long ago, many artists passed through this website who would undoubtedly meet the sufficient requirements to have the honor of inaugurating with their musical art the New Bernabéu next year, 2022, commemorating the 75th anniversary of its creation.

If the memory of those who write them does not fail, the fabulous British band Dire Straits did not appear among the selected ones, and that despite the fact that due to quality and prestige it undoubtedly has a deep Madridista stamp behind its trajectory.

In the last years of the sensational musical decade of the 70s of the last century, Dire Straits burst into power, known in the first place for some live recordings and for a series of concerts whose echoes reached us through mythical specialized magazines such as Melody Maker.

With the release of his first LP, titled simply “Dire Straits”, Those of us who were finally able to check the quality of their songs were simply stunned: if The Beatles is undoubtedly the best band of all time, Dire Straits, at least in their first three LP’s, was the band that better has sounded throughout history. A bit like our Quinta del Buitre, born in recent years in the Dire Straits active: you can’t play better than the fifth in 1987 and 1988, despite the fact that the achievement of the European Cup was not completed. There has certainly been many Real Madrid superior to La Quinta, by international record, above all, but few teams have made us enjoy more and bristle our emotions as much as in those glorious years under the direction of Leo Beenhakker.

If The Beatles is without a doubt the best band of all time, Dire Straits, at least in their first three LP’s, was the band that better has sounded throughout history

Sultans of Swing, almost 44 years after its publication, it is still an exceptional song that in its 6 minutes included a masterful solo by Mark Knopfler, leader and alma mater of the group, who played the electric guitar, they said, without the usual pick (or plectrum, which is more elegant and more correct). Listen Sultans of Swing for the first time it was like attending my first European Cup match, as a child, in Chamartín: a revelation, something unheard of, unique, incredible, unforgettable. The famous solo Knopfler is still considered one of the five best in history, along with other celebrities from Jimmy Hendrix, Eric Clapton, Jimmy Page, Van Halen or David Gilmour.

The first lineup of the band was composed in its beginnings by the following headlines: the Knopfler brothers, Mark and David, both on guitar and doing the vocals, the bassist John Illsley and the drummer Pick Withers. 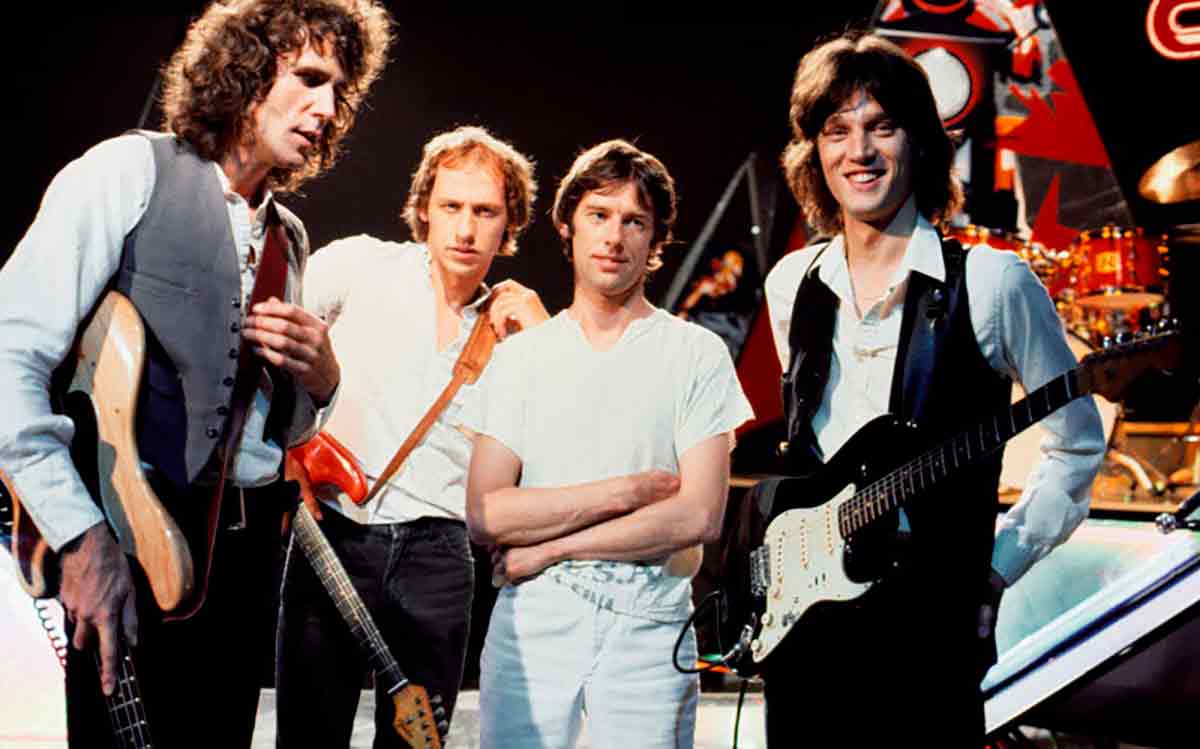 As many of you may know, “to be in dire straits” It is an English expression that is used when they are going through difficulties, especially of an economic nature, and the paternity of the name of the band is attributed to Pick Withers. Whoever writes to them had the opportunity (and great luck) to meet him in person. It was in 1983. By then it had been a year since Withers had left the group to dedicate himself to what since then has not ceased to be his passion: jazz. In that year, together with my friends Pierre and Eduardo, we went to Britain to spend the summer, and by chance my aunt and godmother, married to an Englishman, lived near Monmouth, in Wales, on the banks of the River Wye, and whose The next-door neighbor was none other than the famous Pick Withers.

Pick invited the three friends over for tea at his home, introduced us to his lovely wife Linda, and offered us some delicious welsh cakes, in addition to telling us about his time at Dire Straits. For the short story, when I told him that we came from Madrid, he told us that Madrid was played by a most English forward, Carlos Alonso Santillana, whom he admired for his unique and genuine way of heading.

As many of you may know, “to be in dire straits” It is an English expression that is used when they are going through difficulties, especially of an economic nature, and the paternity of the name of the band is attributed to Pick Withers

Precisely in 1983, a few weeks before, we were able to attend an unforgettable concert in Madrid at the Román Valero stadium (home of CD Colonia Moscardó, a club linked to Real Madrid for many years), with more than 30,000 attendees. In that concert, I remember when when sounding Tunnel of Love (from his 3rd album, “Making Movies”), and when singing that of “…like the Spanish city to me, when we were kids…”, Knopfler harangued the audience, leading us to believe that the Spanish city It was Madrid (a servant thought that the Knopflers had spent the summer in these Castilian lands, as children). Some time later, I discovered that The Spanish City It was a prestigious cultural and commercial center located in Whitley Bay, very close to Newcastle, where the Knopflers, originally from Glasgow, lived (new merengue wink, seat of not one, but two European Cup conquests, in 1960 and 2002 ). It should be noted that in The Spanish City It was where Mark saw his first rock concerts, and in that he coincided with The Police frontman Sting, born in Wallsend, on the outskirts of Newcastle. 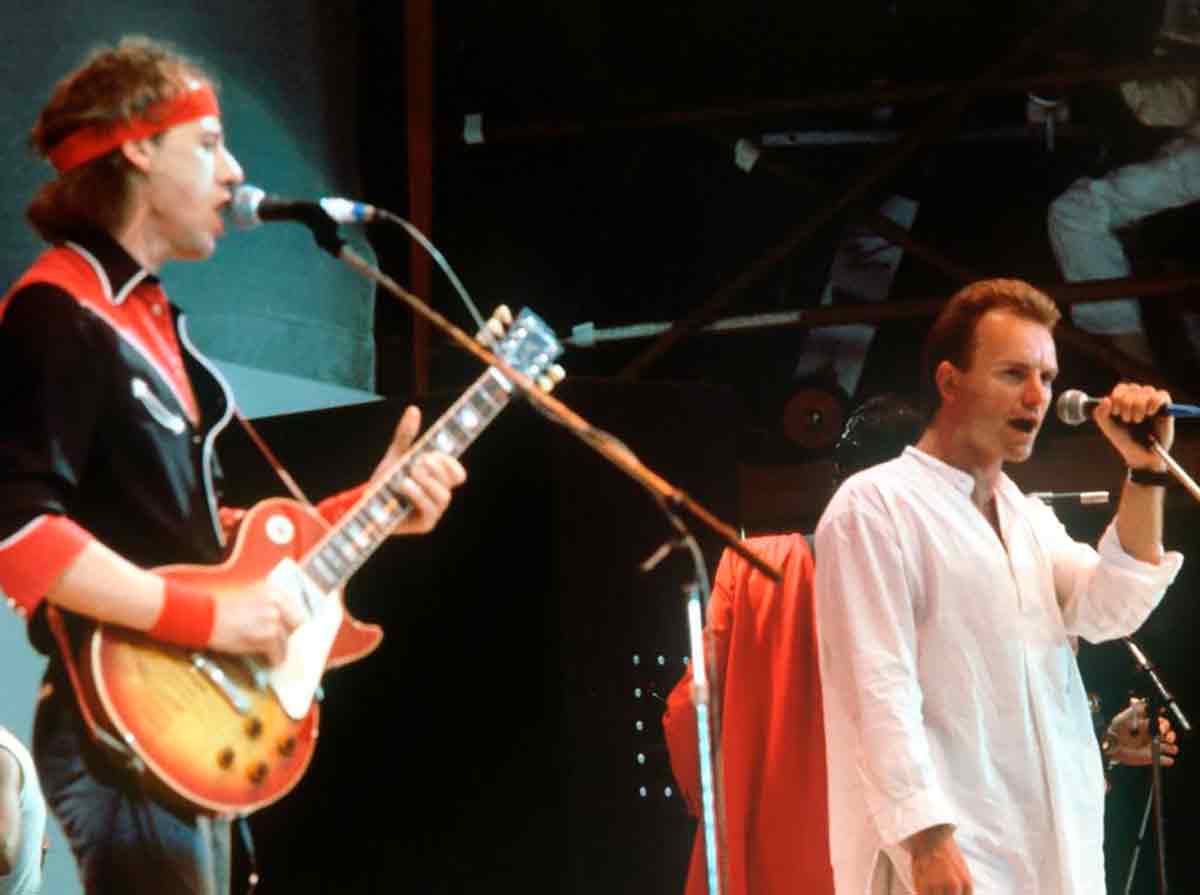 After discovering Dire Straits, with the incredible songs from their first LPs (Down to the Waterline, Wild West End, in the first, Lady Writer and Portobello Belle in his second, “Communique”, the aforementioned Tunnel of Love and Romeo and Juliet, on their third album, “Making Movies”), they went on to become my favorite band. David, it is said that due to disagreements with his brother Mark, he left the group after the recording of “Making Movies” in 1980.

Even so, his 4th album, “Love Over Gold”, with Hal Lindes as a new rhythm guitar and with the addition of keyboardist Alan Clark, left unforgettable jewels such as Telegraph Road O Private Investigations. Dire Straits was gradually evolving from pure rock to dyeing their songs with blues in their ballads. 1982 marks the departure of Withers and there were only two of the founders left, Mark Knopfler and John Illsley. During the period 82-85 is when more tours and concerts star, and their first live LP, “Alchemy”, was published in 1984, where the novelty lies in the inclusion of the main theme of the film Local Hero, Going Home, it is already foreseen that, sooner or later, Mark will fly alone on his own, since it was his first foray into the world of celluloid.

Dire Straits was a bit like our Quinta del Buitre

The team was already different from the early days, it was about making a sweet transition, as in the great football teams that are gradually fading. Even so, in 1985, the band achieved its greatest sales success (not of quality), its European Cup in short, by publishing its 5th album “Brothers in Arms”, whose cover, with one of the magnificent collection guitars by Knopfler on a light blue background, is one of the most iconic in rock history. In this LP is the favorite song of this author, So Far Away, in addition to the lively Walk of Life, a hymn to happiness and life, going back to the group’s origins, a rock mixed with a synthesizer, or the song that gives the album its title, a wonderful ballad with nostalgic overtones, almost a farewell, a last dance In short, it left the flag very high, like the 5th consecutive league of the Fifth in 1990, a historical milestone that we Real Madrid enjoyed, but that we sensed was not going to be repeated any more. As a curiosity, another galactic like Sting composed half with Mark and participated in the choirs of Money for Nothing, song chosen like simple of the LP, that supposed the greater success and it got to be nº1 in the United States and in the United Kingdom. 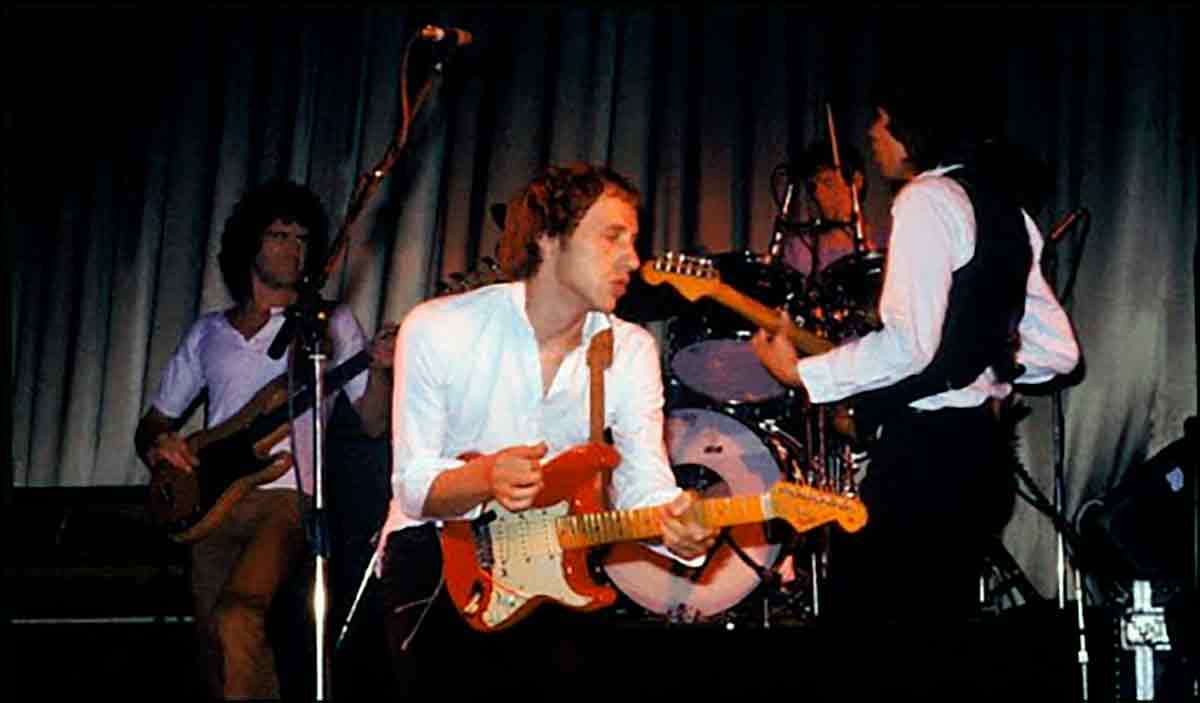 Knopfler, a world-renowned figure, seemed little by little to distance himself from his own group, participating more and more often in compositions for the cinema, as in The color of money by Martin Scorsese (Two Brothers and a Stranger) or in complete original soundtracks as in the famous The engaged princess. Despite the fact that in 1991 they released a failed 6th album, On Every StreetIt can be said that the true swan song was in 1988, with the famous live recording of the concert in favor of the liberation of Nelson Mandela, a gem of Dire Straits plus Eric Clapton, no less. It is already known that many times the galacticos mix very well with each other and leave us authentic memorable exhibitions, like when Figo, Zidane and Ronaldo Nazario got together, even if no Champions were completed with the 3 golden balls playing together: but there is the League 2002-2003.

In 1992 the band was officially dissolved and, curiously, their farewell concert was at the La Romareda stadium in Zaragoza, before 40,000 spectators. Perhaps Mark Knopfler left a hidden secret chord on the banks of the Ebro since, two years later, he would be born for professional football in that same stadium of ours. Raul Gonzalez, which was, let us not forget, a luxury protagonist so that a few years later Real Madrid regained its European scepter.

It is already known that many times the galacticos mix very well with each other and leave us authentic memorable exhibitions, like when Figo, Zidane and Ronaldo Nazario got together, even if no Champions were completed with the 3 golden balls playing together: but there is the League 2002-2003

Knopfler continued to alternate with country and folk music projects, such as his collaboration with the Notting Hillbillies, and giving acoustic recitals and various unplugged in study. He even participated in Bob Dylan’s 2012 tour (an old friend, as early as 1979 both Knopfler and Withers were part of the recording of Slow Train Coming) but its heyday was past.

Meanwhile, his longtime Dire Straits partner, John Illsley, opted for retirement from music and devoted himself body and soul to his true passion: the art of painting. From time to time he also takes part in concerts for charity purposes. As a curiosity, to say that, for 4 years, Illsley, one day after the publication by this author of an article on the madridismo of John Wayne, decided to continue with his own Twitter account (@John_Illsley) who signs this text, demonstrating one of two things: either he is a staunch fan of the great Duke Wayne or … because he is a Real Madrid player like all of us. Or both, only he knows. 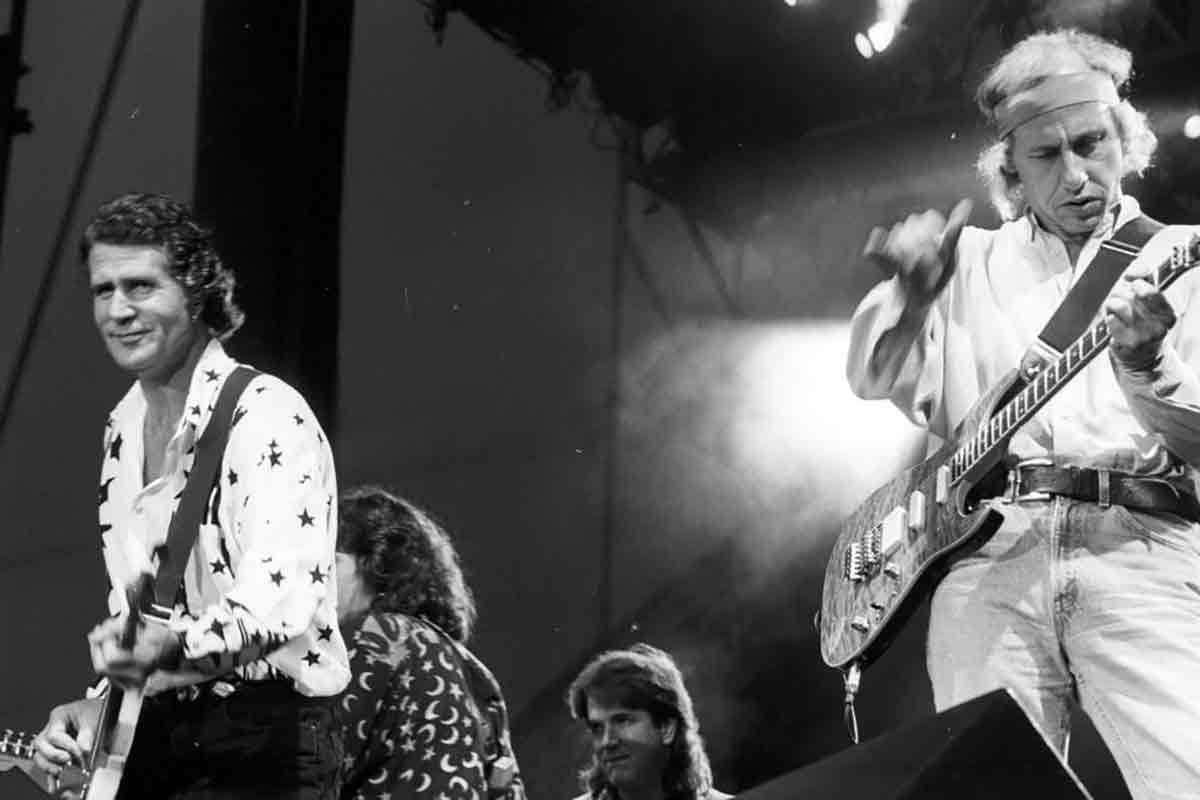 In any case, I recommend that, from time to time, you listen to this wonderful soundtrack with a clear, fresh and Supreme Quality sound, like the great nougats of Jijona, either in their most danceable songs, or in their most danceable songs. most notable ballads. And, like our Quinta del Buitre, Dire Straits makes a type of music unthinkable in 2021. There is no doubt that, nowadays, not even the best band in the world comes close to the height of their shoes.